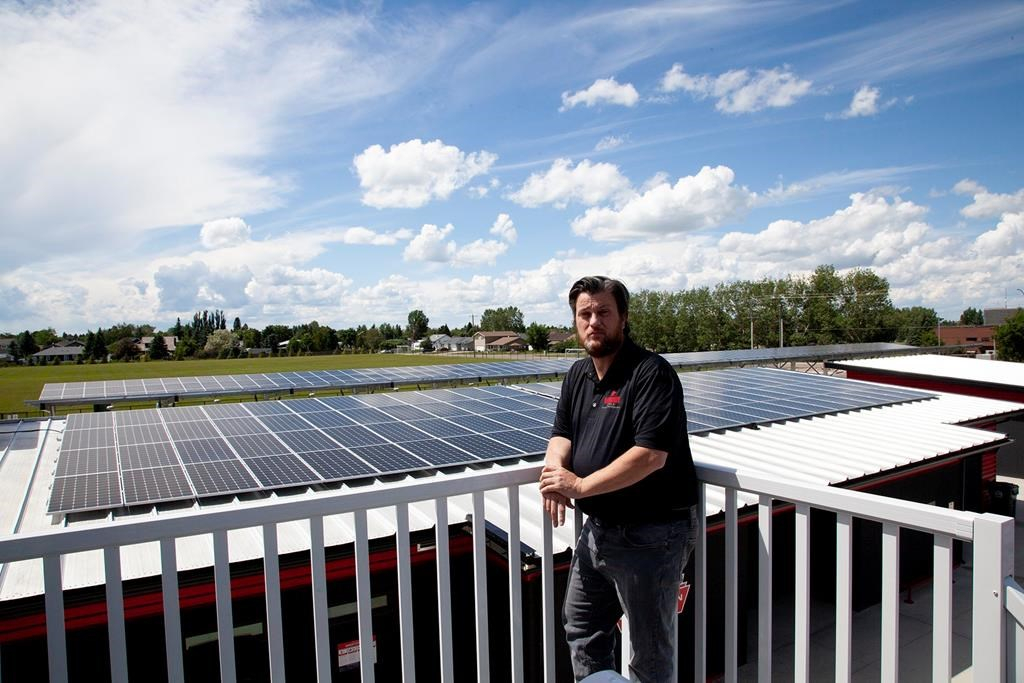 Greg Robinson poses in front of solar panels on top of a municipal building in Raymond, Alta., in this recent handout photo. Handout photo by The Town of Raymond, Greg Robinson
Previous story
Next story

What began as a friendly rivalry between two southern Alberta towns has ended with what may be one of the most extensive programs of solar power anywhere in the country.

Raymond, an agricultural community of about 4,000, has operated nine municipal buildings and all of its street lights by the sun since last fall. It sells excess solar power to the electrical grid when it can and buys it back when it needs to.

It all started in 2017 when town council heard the nearby community of Cardston was planning a solar project. That rankled a bit, said Greg Robinson, Raymond's economic development co-ordinator.

"We have a bit of a competitive rivalry," he laughs. "We just wanted to do better than them."

And so they have.

Raymond has become what is believed to be Alberta's first "net zero" community. The money spent on power from the grid in January is expected to be recouped in the sunny days of July.

"It's ebb and flow," Robinson says. "At the end of the day, we're hoping it's sized properly to be a wash."

The greenhouse gas savings are the annual equivalent of taking 169 cars off the road.

Solar panels are leased from Calgary power utility Enmax at a total installed cost of $2.8 million. About $630,000 of that came from a provincial grant under a program, which, said Robinson, "made it very easy to say yes."

The grant brought the installed cost of the solar panels to less than $2 per watt, well under the average cost for installation.

The program's future, however, is uncertain.

The Municipal Climate Change Action Centre, created in 2009, has spent about $1.5 million out of a five-year $6.9 million allocation for solar projects that mostly came from the province's carbon tax. New Premier Jason Kenney turfed the tax as one of his first acts in government.

“We have no concerns about our ability to fund existing programs,” said centre director Trina Innes. "The government's still exploring ideas for the future right now."

Kenney's United Conservative government also has promised to end subsidies for wind and solar projects. The province was unable to provide information on the future of the action centre's funding.

Meanwhile, solar is growing across Alberta.

Leduc, just south of Edmonton, is finishing a 1.14-megawatt installation that will power the town's recreation centre. Brazeau County in central Alberta is running its fire hall, water treatment plant and administration with solar. Cardston, the town that sparked Raymond's project, has plugged its arena and civic centre into the sun.

The action centre is involved in 74 solar and other projects in 31 municipalities. Robinson recently made a presentation to 22 other Alberta communities.

Installation projects have become routine, said Jason Atkinson of Enmax, the Calgary power utility that has worked with communities on their solar installations.

Software uses 100 years worth of sun and snow data to predict a solar "harvest."

"We have over 1,000 sites out there," Atkinson said. "We have been very accurate. We provide a production guarantee to our customers."

It's the business of the future, he added.

"It's just where society's going. We want to be out in front of it."

"There was 'This seems too good to be true,'" he said. "But the math makes total sense."

Aside from environmental benefits, the town will avoid any future federal or provincial carbon taxes. And at the end of 15 years, when the Enmax lease expires, Raymond will own its own power utility.

Robinson knows it's early days. The project's first annual report won't be ready until the end of the year.

But the future looks, well, sunny.

"Do we intend to stop here? Not really. We've got hospitals and schools and our business core. How can we as a municipality partner with our businesses and our residents? Maybe there is a Phase 3."

Good to see these communities

Good to see these communities switching onto solar energy. The way of the future.