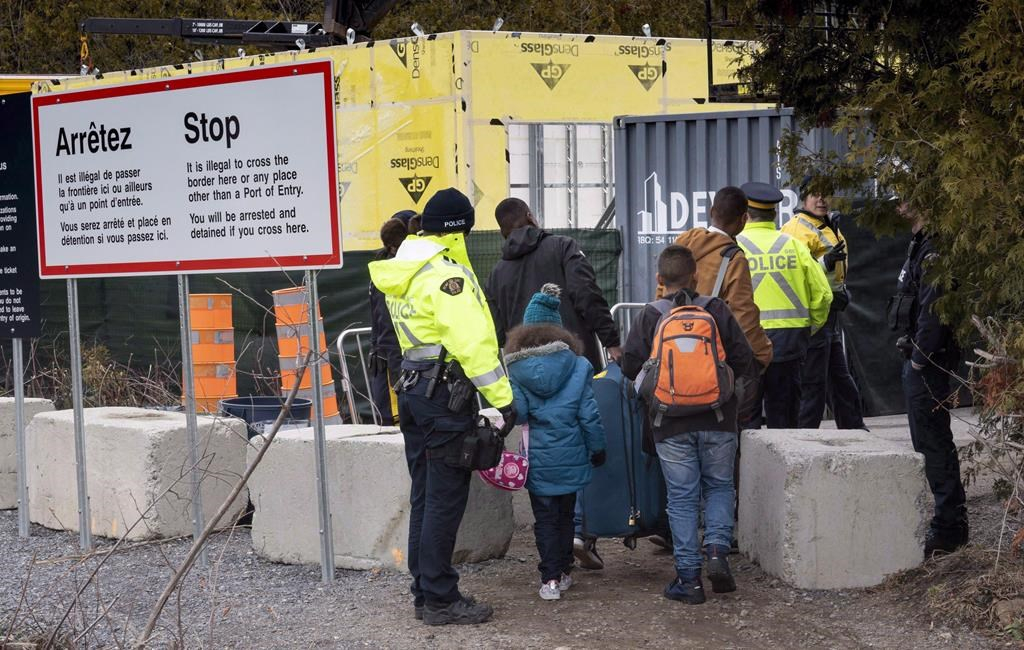 A family, claiming to be from Columbia, is arrested by RCMP officers as they cross the border into Canada from the United States as asylum seekers on April 18, 2018 near Champlain, New York. File photo by The Canadian Press/Paul Chiasson
Previous story

The Canada Border Services Agency has removed fewer than 900 "irregular" asylum-seekers who have applied for refugee protection in Canada through a loophole in asylum laws, according to new federal figures.

Since early 2017, more than 45,000 migrants have arrived in Canada irregularly by entering the country mainly through a forest path between New York State and Quebec, avoiding official border checkpoints where they would be turned away and told to file refugee claims in the United States.

So far, only 866 have been removed from Canada after their refugee claims were rejected, according to figures tabled recently in the House of Commons.

The number is low is because removal orders can only be enforced once a refugee claimant has exhausted all legal avenues to try to remain in the country, said Marie-Emmanuelle Cadieux, a spokeswoman for Border Security Minister Bill Blair.

"Prior to removal, individuals may seek leave for judicial review, as well as administrative review procedures that assess the potential risk to the person of returning to their country of origin," she said in a statement Friday.

"Everyone ordered removed from Canada is entitled to due process before the law and all removal orders are subject to various levels of appeal."

Canada began experiencing an influx of irregular asylum seekers in early 2017, after U.S. President Donald Trump announced he would end a program that offers temporary protected status to migrants from several countries, serving notice he would seek to return them to homelands that had previously been considered too dangerous.

By avoiding official border crossings when entering Canada, these migrants take advantage of a loophole in Canada's "Safe Third Country Agreement" with the United States that allows people who are already on Canadian soil to make refugee claims. The agreement would otherwise see them turned back to the U.S., a country Canada considers safe for them.

The Trudeau Liberals have called these individuals "irregular" migrants, rather than "illegal" — the term regularly used by the Conservatives.

Their refugee claims are processed by the Immigration and Refugee Board (IRB) — an arm's-length tribunal. The IRB has built up a major backlog in trying to process the rush of new claims over the last two years. This, too, is a factor in the length of time it has taken for those without valid claims to be removed by the border-services agency.

Figures posted online show the IRB has only processed 33 per cent of the refugee claims it has received from irregular migrants since 2017. Of those, 6,885 people have been accepted for refugee protection and 5,650 have been rejected. Another 1,322 claims have been abandoned or withdrawn. Tens of thousands remain in a queue, waiting to be processed.

Meanwhile only 30 per cent of the 4,700 appeals of these decisions have been finalized.

Even if their appeals are unsuccessful, refugee claimants may also be entitled to pre-removal risk assessments to determine whether sending them back to their home countries might put them in danger.

Cadieux says the decision to remove someone from Canada is "not taken lightly."

However, CBSA is required by law to enforce removal orders as soon as possible once all avenues of appeal have been explored.

"Everyone ordered removed has been given due process, but once legal avenues have been exhausted, individuals are expected to respect our laws and leave Canada, or, as per our commitments, be removed."