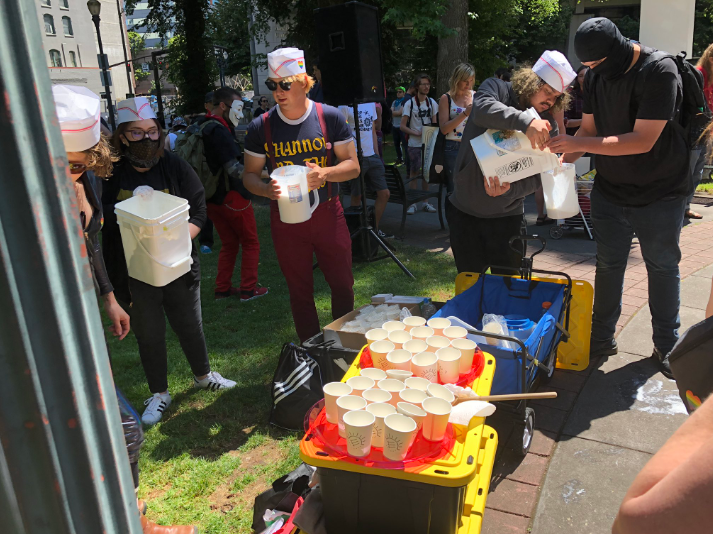 Members of a local antifascist collective hand out milkshakes to bystanders at a protest in Portland, on Saturday, June 29. Photo by Shane Burley via Twitter
Previous story
Next story

Rumours spread like wildfire on social media last weekend after clashes between far-right demonstrators and counter-protesters in Portland, Ore., spilled over into violence and left conservative writer Andy Ngo with facial injuries.

On Twitter, prominent media figures accused protesters associated with antifa — shorthand for antifascist or antifascism — of throwing milkshakes laced with a cement-like substance, while other users shared photos of what they claimed were bystanders who had suffered chemical burns from being hit with milkshakes.

Before long, these claims made their way onto the pages of mainstream newspapers and were reported as fact on television by outlets such as CNN.

The problem? Many of those claims weren't true, and others are still nothing more than unsubstantiated rumours.

The allegations are just the latest effort by far-right activists to vilify the antifascist movement, serving as a cautionary tale for media outlets who often uncritically accept these deceptive narratives and pass them along as fact.

The origins of a disinformation campaign

Most of the distorted, misleading and false claims about the events in Portland stem from a single tweet sent by the Portland Police Bureau (PPB) on Saturday, stating that officers had "received information that some of the milkshakes thrown today ... contained quick-drying cement."

PPB did not state where that information came from or whether it had been confirmed.

While there is video evidence of people drinking and throwing milkshakes, the "quick-drying cement" claims remain unsubstantiated at this point.

National Observer reached out to Portland police for clarification, but the bureau has not responded to our inquiries.

Police have received information that some of the milkshakes thrown today during the demonstration contained quick-drying cement. We are encouraging anyone hit with a substance today to report it to police.

Portland police did respond to an inquiry from Willamette Week's Katie Shepherd, telling her they had "received information during the event that some people were mixing a concrete-like substance into the milkshakes" and that a police lieutenant observed a cup that "appeared to have material on it consistent with quick drying cement." However, they did not confirm the information they shared in the initial tweet.

The Portland Mercury received similar information from a Portland police spokesperson, who told the local paper they "put out the tweet to bring attention to this potential hazard and to encourage people to contact us if they were the victim of a crime."

"It appears that one officer's recognition that a coconut milkshake looks a little like wet cement convinced PPB to issue the worrisome tweet," the Portland Mercury concluded, citing information from the PPB spokesperson and social media posts from people who drank the milkshakes and did not get sick or otherwise suffer injuries.

PPB's tweet created a firestorm, leading to a flood of baseless, deceptive and, in some cases, completely fabricated claims, with some social media users even asserting that antifa had carried out "acid attacks."

Former Rebel Media employee Jack Posobiec, who currently works for right-wing outlet One America News Network, was among the first and most vocal Twitter users pushing the unsubstantiated rumors about "concrete milkshakes" as fact.

Posobiec then tweeted a photo along with a caption asking if it showed "quick-dry cement being mixed into milkshakes by Antifa."

However, local reporter Shane Burley — who took the photo — debunked that suggestion, saying he watched the milkshakes being prepared and saw "zero evidence" that anyone was adding quick-dry cement to the mixture.

Jack Posobiec stole this photo of mine and tweeted it with a question that suggested that they were putting quick dry cement in the cups. I watched them prepare the milkshakes and took this photo of it, and there was zero evidence of that. No one has found any concrete. https://t.co/qQo4W2um5K

Others quickly joined in, distorting PPB's tweet and repeating the unsubstantiated "cement milkshake" claim as fact.

Fox News's Laura Ingraham, InfoWars’s Paul Joseph Watson and Ian Miles Cheong, managing editor of right-wing outlet Human Events, were among those who posted tweets stating that antifascists had thrown milkshakes mixed with a cement-like substance. Cheong, like Posobiec, also claimed that the "concrete mix" was being used "to produce chemical burns."

Before long, social media users and trolls started piggybacking on an already-distorted narrative, tweeting photos of what they claimed were acid burns caused by the milkshakes.

However, a quick reverse image shows that neither of the photos are what they were claimed to be.

The first image actually shows a woman who was injured during a spa treatment gone wrong, as reported in 2017.

The second image purportedly showing burns suffered from exposure to the milkshakes is actually an old photo that appears widely in Google search results for "chemical burns." The photo first appeared in 2011 on DeviantArt.

From social media to the headlines

Despite being unsubstantiated, rumours of cement-laced milkshakes were widely reported as fact by right-wing outlets and mainstream media alike.

Fox News reported on the incident on Sunday, publishing a story with the headline "Antifa, conservative protests turn violent as demonstrators throw milkshakes of quick-dry cement at police and onlookers." That headline has since been altered. On Tuesday, the same URL directed to an article with a headline reading: "Antifa-Proud Boys confrontation in Portland turns violent; conservative writer injured."

As recently as Tuesday morning, Business Insider published an article with the headline: "Protestors threw milkshakes containing 'quick-drying cement' as far-left and far-right groups clashed in Portland, according to police."

Meanwhile, fringe websites like InfoWars and Big League Politics are running with the "acid attacks" narrative, claiming that antifa is planning an acid attack on an upcoming right-wing rally in Washington, D.C. As proof, the websites cited anonymous posts on the social media platform Telegram.

While the assault on Ngo, the conservative writer, is not in question, much of the inflammatory information surrounding the events of last weekend is either unsubstantiated or demonstrably false. These claims are part of a broader, ongoing disinformation campaign aimed at vilifying antifascists and portraying the movement as violent and unruly.

Over the past several years, far-right activists have tried to falsely link antifa to multiple mass shootings and other events such as train derailments. On social media, fake antifa accounts have been used to post content glorifying violence and, more broadly, to spread disinformation and cause confusion about the antifascist movement.

In multiple instances, posts from fake antifa social media accounts have ended up in news stories and on the pages of mainstream newspapers, including the New York Times.

The smear campaign aimed at antifa has even fooled government agencies. In 2017, a hoax about antifa pushed by fringe websites like InfoWars and Gateway Pundit spread so widely that the U.S. Department of Homeland Security even inquired about it, believing it was real.

This fuelled lawmakers to take action against antifa. The following year, congressional Republicans introduced the “Unmasking Antifa Act of 2018,” which sought to imprison protesters who engaged in activities typically associated with the antifascist movement. The bill did not pass, but the incident serves as a startling reminder of the very real consequences of disinformation.

Saturday's protest, which centred on a rally organized by the far-right group Proud Boys, occurs against the backdrop of frequent far-right violence in Portland. In May 2017, two men were killed in a fatal stabbing while defending a Muslim girl and her friend from a verbal assault. The assailant, Jeremy Christian, had recently attended a rally put on by the Proud Boys-linked group Patriot Prayer. Events like this have mobilized local antifascists, who have seen the deadly consequences of unchecked far-right street rallies.

As we saw last weekend, many mainstream news outlets are still repeating inflammatory rumours about antifa as fact — demonstrating how quickly disinformation can travel from the fringes of social media to the headlines.

Extremists could use peaceful demonstrations as cover, intel report claims

Thanks, Caroline Orr, for

Thanks, Caroline Orr, for your very thorough analysis and debunking of yet another blatant attempt at disinformation by the alt-right. We can only hope that MSM will start to do their due diligence too and stop uncritically passing along this kind of toxic messaging and thus making it seem legitimate. Donating to your reporting is already worth it! :)

The big questions I have when

The big questions I have when I see stuff like this getting passed on by the "mainstream media" are "Do the reporters and editors no know that they can check this stuff using thing like the reverse google image feature?" and "Do they even care that they could easily debunk this stuff if they tried?"

After a while you have to ask whether it's all about "clicks" and "going viral", and the need to be objective just goes out the window when it clashes with a "story with legs"?

Great article. Thanks for

Great article. Thanks for reporting on this.