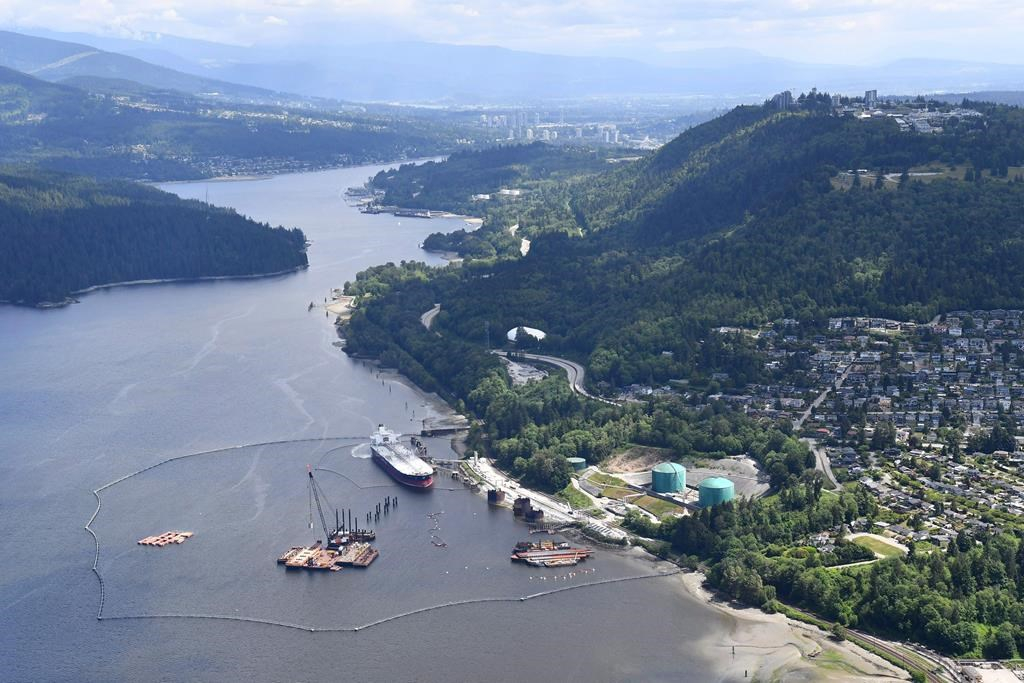 The federal government is facing a new legal challenge after it approved the Trans Mountain pipeline expansion for a second time.

Ecojustice has filed a motion to the Federal Court of Appeal on behalf of Raincoast Conservation Foundation and the Living Oceans Society asking for leave to launch a judicial review of cabinet's decision.

The organizations say in a joint statement that Ecojustice will argue cabinet failed to comply with its responsibility to protect critically endangered southern resident killer whales when it reapproved the project June 18.

This is the second time Ecojustice has gone to court on behalf of the conservation groups over the pipeline expansion, which is expected to increase tanker traffic sevenfold in the whales' habitat.

Last August, the federal court struck down the government's previous approval of the project, ruling the marine environment hadn't been considered and Indigenous consultations were incomplete.

Margot Venton, nature program director for Ecojustice, said in an interview that while cabinet and the National Energy Board have since acknowledged marine threats, the approval still fails to mitigate their impacts on the endangered species.

"Our concern is they haven't satisfied their responsibilities under the law because they have not ensured that there will be measures in place that will avoid or lessen these effects on the whales," she said.

In the wake of the Appeal Court's ruling, Natural Resource Minister Amarjeet Sohi ordered the National Energy Board to undertake a new environmental assessment of the impact additional oil tankers will have, with a specific focus on the risks to southern resident killer whales.

Ottawa also announced an investment of $61.5 million over five years to address threats to the species, including limited prey availability, physical and acoustic disturbances and ecosystem contaminants.

The National Energy Board recommended in February the government approve the expansion project after reviewing marine environment impacts. The board found that the project was in the public interest despite likely "significant adverse effects" to endangered southern resident killer whales and Indigenous cultural practices related to the animals.

From the time the Trans Mountain expansion was proposed in 2013 to the reconsideration, the number of southern resident killer whales declined to 74 from 82, Ecojustice said in the court documents filed Monday.

The species is protected under the federal Species at Risk Act. The main threats to their survival are the reduced availability of chinook salmon, physical and acoustic disturbances from vessels, marine contamination and ship strikes. The latter was highlighted when Ottawa updated its recovery strategy for the species in December.

If the government has failed to meet requirements outlined in the Species at Risk Act, then the conservationists believe the court can once again set aside the project's approval, Venton said.

"The Court of Appeal was very clear in its August decision that cabinet needs to comply with the law for their approval of the pipeline to be valid."

He pointed to measures announced in May to address key threats, including an agreement with the Pacific Whale Watch Association to refrain from offering tours of the species, a program to increase slow-down zones for commercial vessels near Vancouver's port and a requirement that vessels stay at least 400 metres away from all killer whales in the southern residents' critical habitat.

Wilkinson issued the statement Monday after the Canadian Science Advisory Secretariat released a report assessing the combined incremental effects of key threats on both the southern and northern resident killer whales.

The report is an important addition to existing research but doesn't take into account federal actions and investments since 2017, the statement says.

The report says it also doesn't take into account future human activity and "low probability-high impact events" like catastrophic oil spills were out of its scope.

"The Government of Canada recognizes the Northern and Southern resident killer whales face imminent threats to survival and recovery and we are committed to doing everything we can to protect them," the Fisheries Ministry statement says.

This brings forward the bill

This brings forward the bill C48 and C 69 that was front and centre of the Conservative conversation at the Calgary Stampede.

#Bill C 48 prohibits oil tankers to sail in the waters from the North tip of Vancouver Island to the Alaska coast.  This affects #American tankers mostly.   The American Tankers are presently using the inside channel to move oil from Alaska to Washington. Over 300 per year twice that amount if you consider the returns.

Canadian oil is shipped from the waters adjacent to the south end of Vancouver Island and the mid part of that Island as a location reference.

In the fighting bill, the Conservatives are representing the USA, not Canadian interests.  In case you had any doubts.
#Bill C69 did away with two pieces of Harper/Kenny legislation that was irresponsible, to say the least. First off National Energy Board Act: This was legislation that allowed Harper to become a dictator in his own mind at least. Any conflict with a native group could be set aside by the Minister in charge. In action, it caused endless delays in the West coast pipeline. Reason? The US does not want us shipping off the west coast it will cut deeply into their markets in Indochina and China and, they will not be able to use their oil supply on or off as a bargaining chip!

Secondly: Canadian Navigable Waters Act; was changed by Harper/Kenny to a free-for-all. One outstanding item is the BC dam on the Peace River. A navigable river the dam was built and was criticized for not being able to produce enough electricity to pay for its self. It was however built to create a sump in the Peace River suitable for drawing large amounts of water out of. This brings me to the #Weatherford Project. So named after the company who designed and specked it.

Weatherford is immensely designed to move 2/3rds of the flow of the Peace River to the US border. If Conservatives build this Canadian's will pay for the build so the US can get cheap water. If the Peace River has been turned back into navigable water that project is dead.

What do I mean by immense? The design calls for 4 large diameter pipelines and 6 pumping stations. Each pumping station to use the electrical power of a city!

The Conservatives again looking after US interests, not Canada's!

Well said, John. I was

Well said, John. I was unaware of the Weatherford Project and the Site C Dam on the Peace.