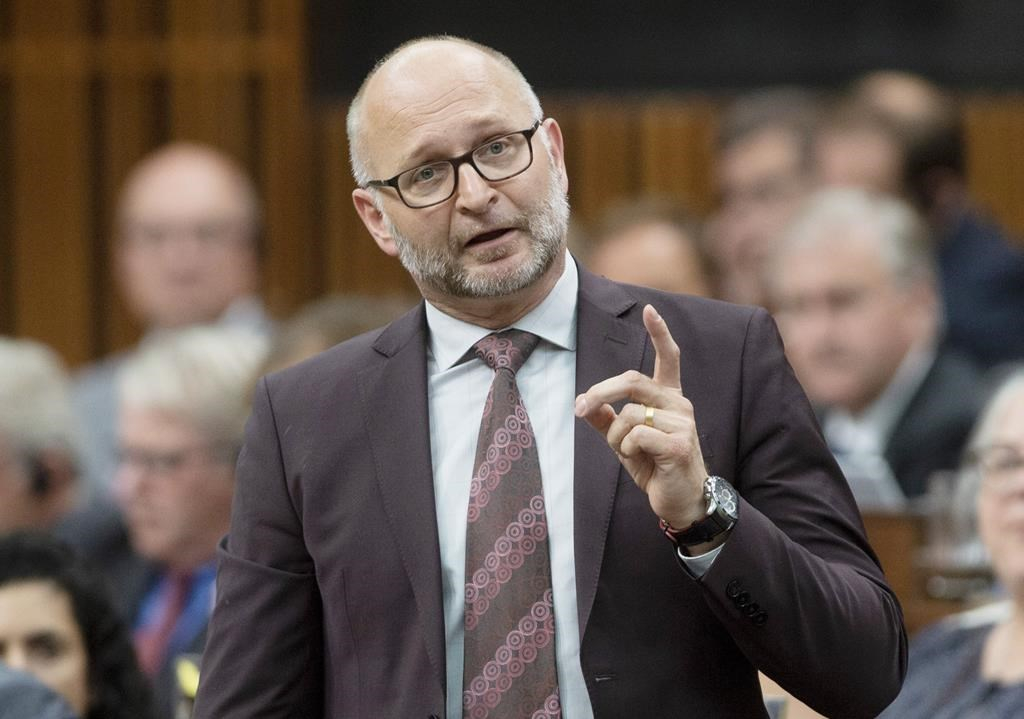 Minister of Justice and Attorney General of Canada David Lametti responds to a question during Question Period in the House of Commons on June 17, 2019 in Ottawa.File photo by The Canadian Press/Adrian Wyld
Previous story
Next story

The federal government is urging all provincial governments to put an end to conversion therapy as it looks at changes to the Criminal Code.

In a letter to the provinces and territories, Minister of Justice David Lametti, Minister of Health Ginette Petitpas Taylor and Randy Boissonnault, special adviser to the Prime Minister on LGBTQ2 issues, asked them to do their part.

"Conversion therapy is a cruel exercise that can lead to life-long trauma," said the June 21 letter.

"The provincial, territorial, municipal and federal governments all have roles to play to protect Canadians from the harms associated with this practice."

The letter said the federal government is considering Criminal Code reform concerning conversion therapy — the practice of attempting to change a person's sexual orientation or gender identity through counselling or religious teaching.

Several provinces and municipalities have already banned the practice.

On Monday, city council in St. Albert, a bedroom community northeast of Edmonton, voted unanimously to approve a motion that would eliminate the controversial practice through bylaw amendments. It calls for a $10,000 fine for anyone who advertises or performs the therapy on minors in the city.

Coun. Natalie Joly, who introduced the motion in May, said there's no indication conversion therapy is conducted in St. Albert. But she wanted to show that it's not welcome there.

"It's a statement to our youth that says we have their backs, that we love them just the way they are and that we want to make sure they have safe spaces and to know there are safe places in their community," she said Tuesday.

St. Albert is believed to be the first municipality in Alberta to pass such a ban — although Calgary, Edmonton and Sherwood Park are looking at similar bylaws.

Kristopher Wells, a Canada Research Chair for the Public Understanding of Sexual and Gender Minority Youth at MacEwan University in Edmonton, said it's a positive step for municipalities to take a stand against conversion therapy.

"It's part of a larger trend that we're seeing not only across Canada, but North America — this movement to end conversion therapy, which many consider to be a form of psychological torture and abuse," he said.

Wells said it's particularly important in Alberta, where the United Conservative government recently disbanded a working group tasked with outlining the province's strategy on the issue.

Federal officials said in the June letter that a number of provinces have acted to discourage conversion therapy, but they raise concerns that "a number of jurisdictions have not yet taken steps to end or condemn the practice."

An emailed statement from Alberta Justice Minister Doug Schweitzer said they "oppose and condemn conversion therapy in any form."

The province also takes enforcement of the practice seriously, he said, and has made it clear that any evidence of conversion therapy in Alberta should be taken to the proper authorities.

"The Government of Alberta shares the federal government's concern for any vulnerable population," said the statement.

Schweitzer said they are pleased to know the federal government wants to work with the provinces on Criminal Code reforms.

St. Albert's motion also encouraged the federal government to make conversion therapy a criminal offence. City administrators advised against the ban, saying it should be left to higher levels of government.

Wells said it's important that all levels of government take a stand.

"I think municipalities are going to have an increasing role to play in creating these kinds of welcoming and inclusive and supportive communities," he said.

— With files from CTV Edmonton.

I'm sure Kenney will ban the

I'm sure Kenney will ban the ban in St. Albert.

A call for a national LGBTQ2+ health strategy