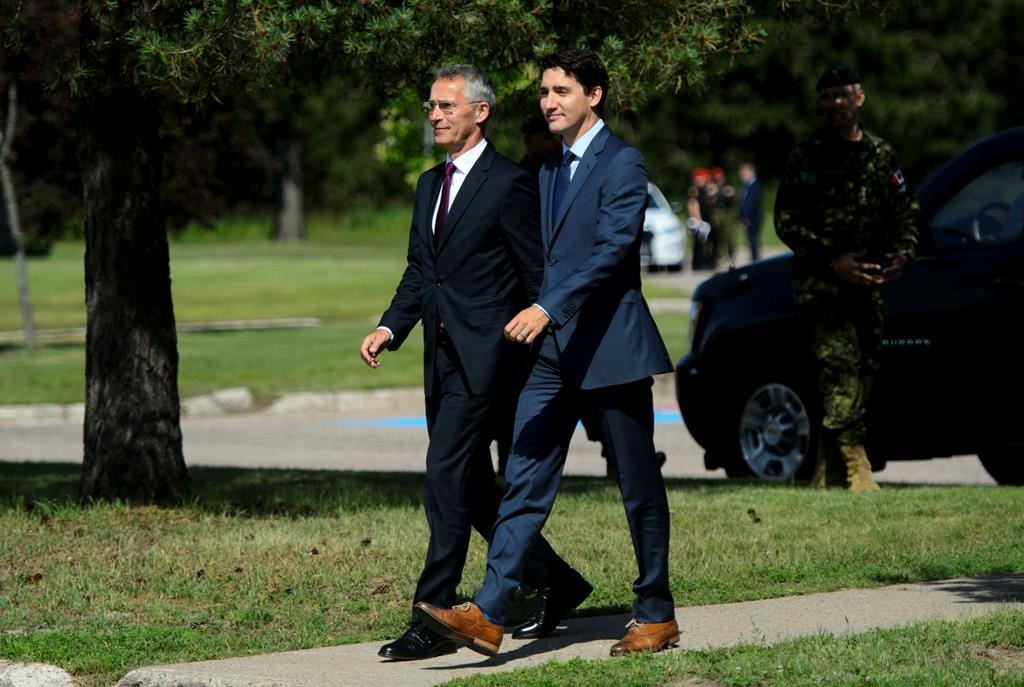 Stoltenberg offered that assessment at the start of his Canadian visit on Monday that includes a tour of Canadian Forces Base Petawawa with Trudeau, and discussing Canada's NATO deployments in Latvia and Iraq with the prime minister.

The federal government plans to invest billions of dollars less in new military equipment than promised this year, which has raised concerns about whether the Forces will fall short of broader NATO spending targets.

U.S. President Donald Trump has called NATO an outdated body, saying it was formed to defend the West in the Cold War, but now neglected and underfunded by its own members, leaving the United States to assume the burden of supporting it.

"Under your leadership, Canada is stepping up its contributions," Stoltenberg said to Trudeau, citing Canada's leadership of the NATO training missions in Latvia and Iraq.

After his meeting with the NATO leader, Trudeau will address Canadian troops at CFB Petawawa, about 160 kilometres west of Ottawa.

Canada's mission in Latvia is one of several in NATO countries that have borders with Russia, part of a show of force to discourage Russian President Vladimir Putin from threatening other countries in Europe's east.

The increased NATO presence is a result of Russia's 2014 annexation of Ukraine's Crimean Peninsula, and its fomenting of Kremlin-backed Russian separatists in Ukraine's eastern regions. Ukraine is not a NATO member.

Canada also leads the NATO training mission for Iraqi forces in that country. There are heightened tensions in that region because of the escalating dispute between the U.S. and neighbouring Iran.

After the visit to CFB Petawawa, Stoltenberg will travel to Toronto for a speech and question-and-answer session at the University of Toronto.

The visit starts a week of transatlantic diplomacy for Trudeau, who will welcome European Union leaders to a summit in Montreal on Wednesday.

Canada extends Iraq and Ukraine military missions to 2021 and 2022

As Trump shadow looms, Trudeau in Latvia to talk up Canada's NATO commitment

Defense spending. What an

Defense spending. What an infernal euphemism for humanity's failure of intellect, courage and imagination. Back to "war mongering" as usual - thanks to the ineradicable fears of men.