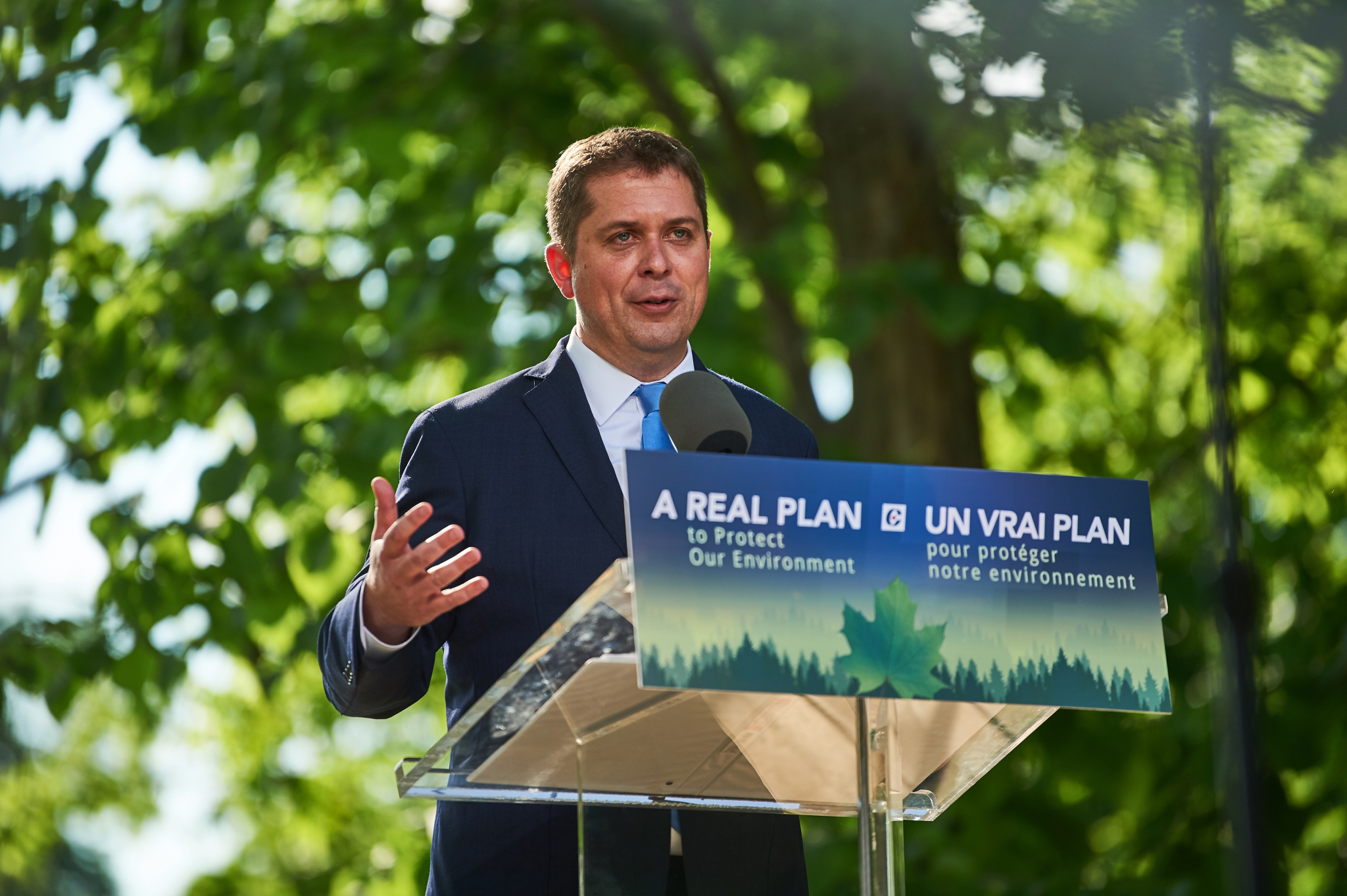 Imperial Oil says it "took the opportunity" to lobby Conservative Party Leader Andrew Scheer at a literary gala in May where the oil company paid for everyone's dinner.

In fact, that night both Liberal and Conservative MPs were lobbied by several corporate representatives from various sectors, whose employers paid tens of thousands of dollars to sponsor the annual black-tie Politics and the Pen dinner, according to communication reports filed with the federal lobbying commissioner.

Under Canadian law, paid lobbyists must disclose their interactions with certain designated public office holders. These interactions are disclosed through monthly communication reports that are posted publicly on the commissioner’s website in a searchable database.

Communication reports reveal some, but not all the details of lobbying — which is what happens when someone tries to influence government decision-making, either because they were hired to do so on behalf of a client or because they work for a corporation or non-profit themselves. One element not captured is where the communication occurred.

National Observer examined the lobbying reports that were dated the day of the dinner, and cross-referenced them with answers to questions it posed to corporations, associations and government spokespeople about what lobbying had occurred at the dinner itself. The results remove any doubt whether the high-profile dinner was used for lobbying.

Imperial Oil had previously been vague about whether it would report any part of the conversation that its CEO, Rich Kruger, had with Scheer that night. But on June 14 the company did in fact file a lobbying report for that date, listing the two men. It has since confirmed the report is related to the dinner.

The Opposition leader has made a series of environmental campaign promises that align with the views of many in the oil and gas industry, including a promise to cancel regulations proposed by the Liberal government that, if adopted, would dramatically lower pollution from transportation.

Other communication reports filed by the event's corporate sponsors and dated the night of the dinner reveal several other politicians, senior staff and top bureaucrats. The Chartered Professional Accountants of Canada (CPA Canada), for instance, reported an encounter with Democratic Institutions Minister Karina Gould.

Gould’s communications director Amy Butcher had previously said that the minister, who had been seated with CPA Canada representatives, was not lobbied that night. She now says the minister may have asked policy-related questions.

This year, the May 15 event drew 500 people and brought together politicians, writers, diplomats and celebrities to raise $385,000 for the Writers' Trust of Canada, a registered non-partisan charity.

The trust says it controls the seating arrangements, and while it tries to seat at least one politician at every table, it also told National Observer it strives to keep politicians away from tables where there is a real or perceived conflict of interest, and gives corporate sponsors a note reminding them about the rules surrounding ethics, conflict of interest and lobbying.

The disclosures are raising fresh questions with one democracy and transparency activist, who pointed to the Lobbyists' Code of Conduct, which bans proposing or undertaking “any action that would place a public office holder in a real or apparent conflict of interest.”

“You know from sponsoring this kind of event that you’re going to have politicians showing up, and as a result it can cross that line," said Democracy Watch co-founder Duff Conacher.

“If you’ve sponsored the event, you’ve essentially bought access, and you shouldn’t have any conversations that would come anywhere close to talking about issues you’re concerned about, because you would have bought that access — and it would cross the line in terms of creating an appearance of a conflict of interest."

Federal Lobbying Commissioner Nancy Bélanger updated her guidelines for lobbyists this spring, to make it clear that all interactions with politicians or candidates carry some level of a risk of a conflict of interest and need to be managed properly.

Representatives of other organizations that sponsored the event told National Observer that their own lobbying meetings were separate, and just coincidentally on the same day.

Politicians from the Greens and NDP also attended the gala and records show they were lobbied that day by various organizations, but there were no official reports of them being lobbied at the dinner by corporate sponsors.

'Several representatives from the company attended'

Imperial Oil, which is majority-owned by U.S. energy giant ExxonMobil, was a major corporate sponsor of the dinner, donating at least $50,000 to be one of only three "platinum" sponsors. Imperial Oil is listed in the Corporate Mapping Project as "one of the five biggest oilsands producers and a major emitter of greenhouse gases."

The oil company picked up the dinner tab for the whole event. Kruger also appeared in an opening video shown to the audience, alongside executives from the other platinum sponsors and politicians. Platinum sponsors also ran ads in the gala program. Scheer was invited as a guest of Writers’ Trust. His wife, Jill Scheer, is on the gala committee.

On June 14 the company filed a report with the lobbying commissioner for the evening of the dinner, listing Scheer as the participant and Kruger as the responsible officer. The subject matter of their interaction was described simply as "energy."

"Imperial was a corporate sponsor of the 2019 Politics and the Pen event. While in Ottawa, several representatives from the company attended and took the opportunity to engage with key government stakeholders," Imperial Oil’s public affairs adviser Jon Harding told National Observer.

“They would have talked about a number of important issues. We have identified these discussions with the federal lobbyist registry."

He did not respond to several other questions from National Observer about the identities of the other representatives, about the "stakeholders" other than Scheer and about what specifically were the topics discussed.

Representatives from Scheer’s office did not respond to requests for comment before publication.

Approximately one month after the dinner, the Tory leader unveiled his climate plan, which contained an approach similar to recommended actions from the Canadian Association of Petroleum Producers (CAPP), Canada’s largest oil lobby group, which counts Imperial Oil as a member.

Scheer had participated in an election strategy session in Alberta in April with oil executives, where CAPP's president, Tim McMillan, introduced a polling firm executive who led a panel called “paths to federal election victory," according to The Globe and Mail.

CAPP disputes the event was political or related to the election. It claims it meets with government officials in a non-partisan capacity.

On July 8, Scheer said he would nix the government's clean fuel standard, a proposed system that would help lower the pollution from fossil fuels that are used in Canada.

Dan Woynillowicz, policy director at Clean Energy Canada, has countered that the cost of the clean fuel standard will be "affordable for households" as it will be "almost unmeasurable" at the gas station.

Gould 'may have asked questions' to sponsor

National Observer also reported in May that Gould, the democratic institutions minister who co-hosted the event, had been seated with representatives of CPA Canada. The non-profit accounting association was also a corporate sponsor of the dinner, donating at least $25,000, enough to be one of six "gold" sponsors.

On June 13, CPA Canada filed a report with the lobbying commissioner, listing Gould as a participant and president and CEO Joy Thomas as the responsible officer who filed the report.

Media relations manager Perry Jensen said the organization did in fact talk with Gould about policy issues, specifically “the country’s tax system and climate change adaptation.” He said CPA Canada had actually responded to questions from the minister and others at the table about what issues the organization felt were important.

“Our representatives explained our well-known interest in these public policy issues,” he said, including “the need for a comprehensive review of our country’s tax system” and “measures to support climate change adaptation and resiliency” in the public and private sectors.

Gould's communications director Butcher had previously said Gould spent the evening “either hosting on stage or enjoying her meal” and chatting with the prizewinner. Asked about the lobbying disclosure, she said Gould “may have asked questions about what they do, and what their issues are.”

But she reiterated that the minister had spent the majority of her evening co-hosting the event, and did not engage in policy discussions within her ministerial mandate. “She was at the table for a very brief period. Certainly nothing about her files was discussed,” said Butcher.

CPA Canada was supporting a charitable cause by sponsoring the event, Jensen said, as it has done for more than 10 years. The association felt the need to file the report, he added, because the conversation “touched on issues that CPA Canada communicates with the federal government on” and are registered with the commissioner on.

Other sponsors lobby during day of dinner

There were a number of other lobbying reports filed on May 15 by corporate sponsors of the Politics and the Pen dinner that representatives say were unrelated to the event.

For example, Imperial Oil also filed a lobbying report on May 15 listing Natural Resources Minister Amarjeet Sohi, as well as the minister’s director of policy and operations, Mike Burton, and one of his senior bureaucrats, Jay Khosla, an assistant deputy minister.

Sohi’s press secretary Vanessa Adams said the minister held a meeting that same day with Imperial Oil representatives, but was not at the dinner, as he had to be present in the House of Commons. “I can confirm they had a meeting during the day and talked about the energy sector,” she said.

Imperial also engaged with two senior officials in the Privy Council Office: Catrina Tapley, a deputy secretary to the cabinet for operations, and Paul Halucha, who works under Tapley as an assistant secretary for economic and regional development policy.

The two meetings took place in their respective offices, confirmed media relations director Jonathan Abecassis, and were “completely unrelated” to the dinner.

Those were related to the Amazon Web Services Sector Summit in Ottawa, held on the same day, May 15. Qualtrough attended the summit and delivered a speech, confirmed press secretary Marielle Hossack.

The minister also met with Amazon representatives prior to the speech and talked policy, including the government’s adoption of cloud services, she said.

Finally, Intuit, a financial software company and another “gold” sponsor at the dinner, filed a lobbying disclosure for May 15 citing Mireille Laroche, an assistant commissioner at the Canada Revenue Agency.

Vice-president of corporate communications Rick Heineman said that was related to a meeting held at 9 a.m. on May 15 with Laroche inside CRA’s headquarters in Ottawa, where they talked about tax software.