Do we really need hope to push climate action forward? 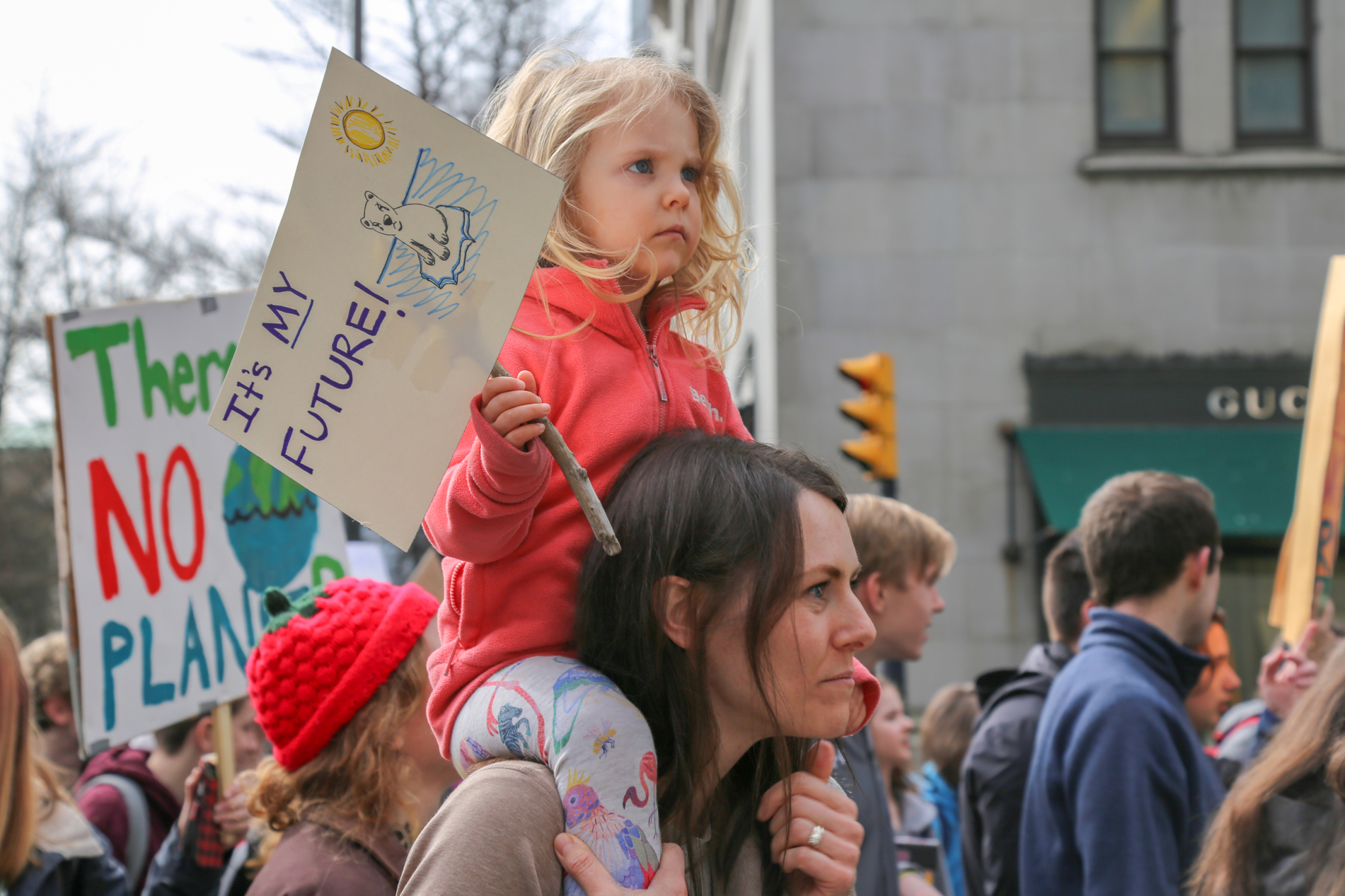 Students march to the offices of Environment and Climate Change Canada in Vancouver on March 15, 2018, demanding climate policies. Photo by Brenna Owen
Previous story
Next story

"What is it that gives you hope?"

That's the question I've heard several times during my recent sampling of climate-action events, from a Burnaby town hall meeting on the Green New Deal to a workshop on climate-change communication at the Hollyhock learning centre in B.C.'s beautiful, tanker-threatened Gulf Islands.

These are all welcome initiatives, bringing together many remarkable and energetic people.

But I'm not so sure about the priority given to that question. Does one need to feel hope in order to take effective action?

I remember the story of a striking Yorkshire miner in the 1980s, when Britain's right-wing government under Margaret Thatcher was bent on closing coal mines en masse and throwing thousands of workers onto the dole. The miner was asked whether he had any hope for defeating the full weight of the police and the British state.

"I don't have hope," he harrumphed. "I have principles." Principles such as solidarity, fairness and community.

Put aside the irony of calling on a staunch defender of coal mining to raise a question about motivating climate action — how do you/we maintain political stamina in the face of seemingly overwhelming odds?

And let's be realistic. Genuine climate action would include not only carbon pricing, but hard caps on emissions and leaving not just coal, but vast swaths of gas and oil in the ground. The petrobloc is fighting tooth and nail to prevent such "stranding" of its assets.

The petrobloc also includes industry-captured regulatory agencies, such as the National Energy Board, and significant chunks of Canada's media. Most notorious is Canada's largest newspaper chain, Postmedia, apparently controlled by U.S. hedge funds. It hopes to slurp up some of the gravy from Alberta Premier Jason Kenney's "war-room" fund to fight environmentalists and other pesky impediments to his extractivist agenda.

Why aren't the world's most powerful countries taking climate crisis more seriously? The United Nations' Special Rapporteur on extreme poverty and human rights surely hit the nail on the head in a BBC World interview on June 25. Philip Alston identified the self-interests vested in the current high-carbon economy and the fossil-fuel industry's furious lobbying to maintain its $5 trillion in annual global subsidies while publics fail to pay attention or still see climate change as far-off.

So, in terms of social psychology and political economy, the deck seems to be stacked.

It is sometimes suggested beating back climate collapse requires rapid mobilization on the scale of the Second World War. Allied soldiers in that conflict had no way of knowing, especially in the bleak years of 1940-41, whether they would win. They risked their lives anyhow and ultimately defeated fascism. Even the inspiring wartime leader Winston Churchill had his moments of severe doubt and depression, which he called the "Black Dog." Yet he stayed true to one of his maxims: KBO, Keep Buggering On.

So what, then, are possible motivations for action other than optimism about future success?

The pleasure and sense of efficacy that comes through working with like-minded people. Love of your family, community and planet. Ethical obligation to future generations. Self-esteem and a feeling of empowerment — better to die on your feet than live on your knees, as the Mexican revolutionary Emiliano Zapata proclaimed a century ago. Curiosity about seeing how the future unfolds, and becoming an active agent in helping to shape it, rather than just an object being acted upon.

And less nobly, perhaps, anger and a desire for revenge. Of all the participants at the Hollyhock workshop, only one (perhaps not coincidentally, a male) admitted in our first session to feelings of outrage. But he was definitely not alone in that sentiment.

Payback is an underrated motivator. Of course, it can lead to mutually destructive cycles of tit-for-tat violence. But social-psychology research shows it to be a powerful emotion — one that, channelled properly, could be a way to maintain order in a situation of lawlessness (such as global capital's current plundering of the planet) and to hold powerful but reckless institutions more accountable.

Quite apart from the social benefits of focusing legitimate outrage, wouldn't it just feel good to stick it to the fossil-fuel industry's corporate elites who for so long have run rampant over nature and human rights — so long as we can retain empathy and, indeed, solidarity with those resource communities and workers seeking a way out of the web of extractivism? A just transition to a carbon-neutral economy would be the opposite of Thatcher's approach, of crushing communities and workers' rights.

Moreover, climate-justice activism offers ordinary people a sense of purpose, a way to live meaningfully. In his classic memoir of surviving the horrors of Auschwitz, Viktor Frankl argued "man's search for meaning" may be the most important human motivator of all.

I find it helpful to take a paradoxical attitude of detached engagement. Championship sports teams don't get too high after a victory or too low after a loss — they just go out and take care of business game after game. (A certain Canadian basketball team and its now-former star player come to mind.)

None of this is to badmouth hope. After all, I recently co-authored a book critiquing the dominant news media for generating a "hope gap" that leaves audiences — even those most alarmed by climate crisis — with a sense of disengagement and powerlessness. Rather than simply reporting environmental disasters and elite political squabbling, journalism could do more to normalize ordinary people's political engagement, and to investigate attainable solutions.

Hope is a wonderful thing if it isn't just an excuse to do nothing except "hope for the best" through, say, magical technologies that don't yet exist.

There is some basis for optimism. Victories have been won. The local resistance helped convince Kinder Morgan to abandon the Trans Mountain Pipeline. Energy East was cancelled altogether. Polls indicate Canadians are placing climate and environment as a top political issue, even if they don't always appreciate the scale and cost of effective mitigation and adaptation.

Let's give the last word to Greta Thunberg, the amazing, world-renowned youth leader. A few months ago, she tweeted a sentiment that Yorkshire miners might have appreciated:

"When we start to act, hope is everywhere. So instead of looking for hope, look for action. Then the hope will come."

Robert Hackett, a retired professor of communication at Simon Fraser University, has Kept Buggering On in the pro-climate movement since 2014.

Canada is betting on climate failure

Very well articulated- thank you! As another KBO climate (act)ivist for the last few years, the hope indeed does indeed follow...and give life much more meaning as a bonus!

The UN Intergovernmental Panel on Climate Change (IPCC), with much ‘help’ from government leaders ,past and present, and many celebrities , convinced most, that the end of civilization is nigh… . The IPCC ,and those supporting scientists, who so effectively convinced UN leadership, that CO2 is the ’enemy’, might now work ‘as hard’ to convince their own local government leaders to curtail CO2 production, while we observe gradual reversal of the effects of that excess CO2.
Some promising ideas are in various stages of development..
1.France produces more than 70 % of it electricity from nuclear fueled power plants. Should more follow the same path ,as an interim step ??
2.The Small Modular Reactor (SMR) where Canada and other countries see much potential to reduce the carbon footprint..
3.The ultimate fix could be the ITER project. Canada not a member ? . ITER's mission is to demonstrate the feasibility of fusion power…much ‘ITER’ info online …
4.Many ‘solutions’ yet to be fully evaluated….tidal power, wind, solar ,geothermal ,hydrogen fuel, carbon capture, retrofitting…. etc.