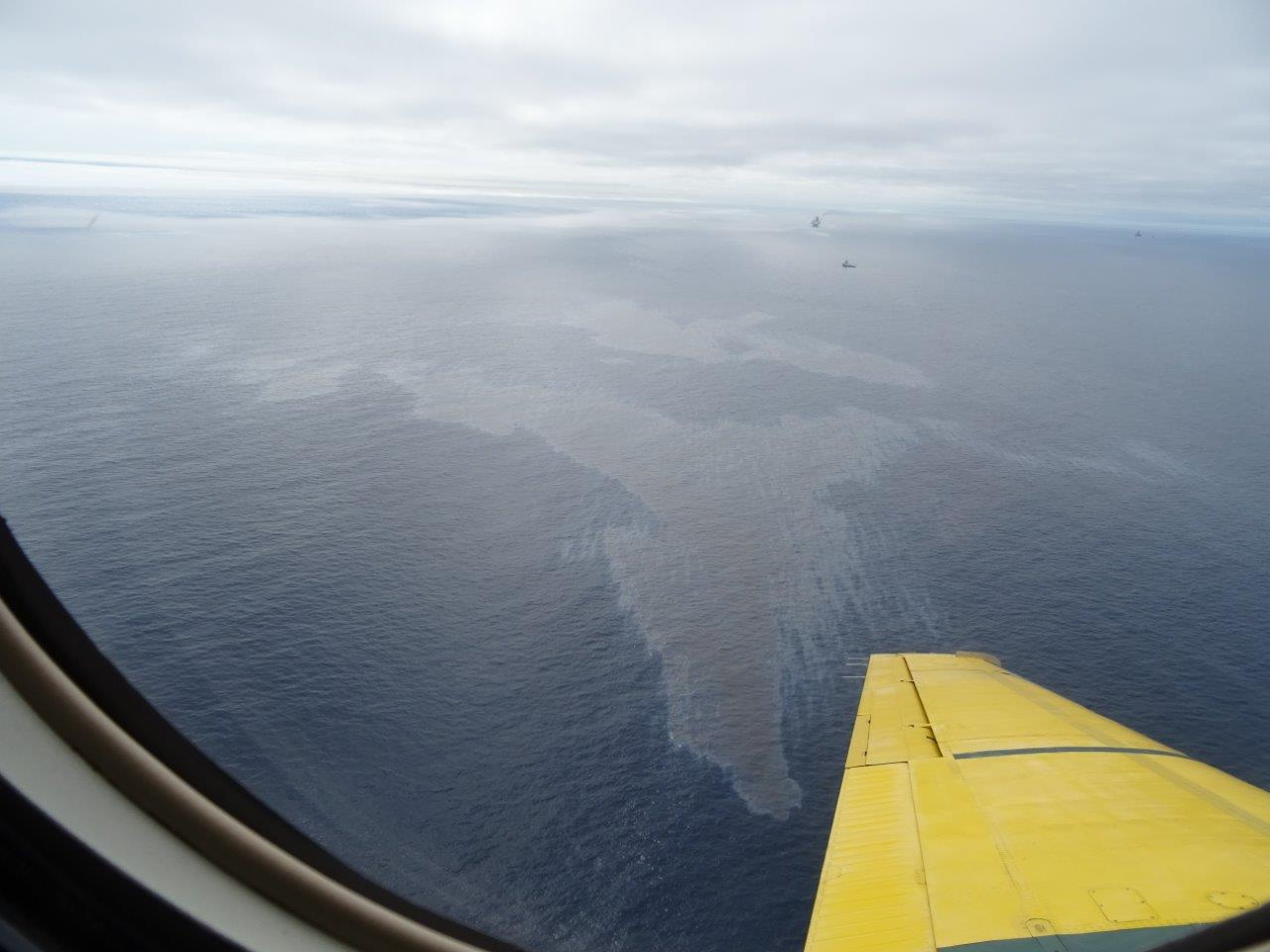 An oil slick 4.6 kilometres wide off the coast of Newfoundland and Labrador drifts on the ocean following an oil spill at the Hibernia offshore platform on July 17, 2019. CNLOPB Photo
Previous story

Crews scrambled to contain a 12,000-litre oil spill off the Atlantic coast Thursday that has shut down production at the Hibernia offshore platform for two days.

The company, a Canadian affiliate of the Texas-based energy giant, said it first spotted an oil slick on the water Wednesday and moved to investigate.

It later found a problem with a system aboard the rig that measures crude oil for storage, it said. A broader investigation has been launched and is still ongoing.

"The discharge, a mix of water and oil, occurred during routine activities related to removing water from one of the storage cells," a company statement reads.

Hibernia has produced over a billion barrels of oil since the field began production in 1997. The former president of ExxonMobil Canada, Alex Guiscardo, has described it as a “crown jewel.”

But production at the 220,000-barrel-per-day platform was "proactively shut down" late Wednesday in order to help ships deploy various collection systems to try to skim the oil off the water, mechanically disperse it or soak it up.

On Thursday evening, Hibernia Management and Development Company warned mariners that the oil slick had grown to a radius of 5.5 kilometres and is slowly drifting northeast.

The spill happened roughly eight months after Newfoundland and Labrador's largest-ever oil spill, which dumped 250,000 litres into the ocean about 350 kilometres east of St. John's in mid-November 2018, from Husky Energy's SeaRose platform.

That oil spill was never cleaned up; the regulatory body overseeing offshore oil operations said it was impossible after the oil sheen had broken up. Earlier in 2018, BP Canada's West Aquarius Drilling Unit, about 330 kilometres from Halifax, spilled 136,000 litres of toxic mud during exploratory oil drilling.

The regulator, the Canada-Newfoundland and Labrador Offshore Petroleum Board, said in a statement it had flown over the oil slick on Wednesday and determined it to be approximately 4.6 kilometres wide and of similar volume to the company's estimate.

It said it obtained satellite imagery taken Thursday morning showing the spill had broken into two oil slicks, and that it was awaiting results from a second surveillance flight. The regulator added it was in touch with the coast guard and Environment and Climate Change Canada's environmental emergency centre.

The company said all platform personnel are safe and that it has not observed any wildlife in the area yet, after sending out two observers by ship and aircraft.

ExxonMobil spokeswoman Lynn Evans couldn’t tell National Observer what environmental impact the spill will have. “Our environmental monitoring is ongoing,” she said in an emailed response to questions on Thursday.

Asked how much of the spilled oil the company has recovered so far, and how long it expected recovery of the rest to take, Evans said, “We are focused on our recovery efforts. I do not have any additional information.”

Evans could also not give an estimate as to how much the spill would cost the company, in terms of cleanup costs, lost revenue and other such elements. “Our focus is on response efforts,” she said.

Hibernia Management and Development Company is jointly owned by a number of energy firms.

ExxonMobil Canada owns a third of Hibernia’s shares, while Chevron Canada Resources owns over a quarter and Suncor owns a fifth.

How many oil spills have

How many oil spills have happened off the coast of NL in recent years? And how many does it take before they learn to stop drilling?

However many have been

However many have been reported is probably only a fraction of the contamination Ocean Oil Drilling/extraction activities have caused.
Just how much contamination from toxic spills/releases can life on this planet survive? Well, the drastic decline in all wild species is most likely the sign of the apocalypse. Humanity's precarious position on the top of the flagpole is no guarantee of its survival.

Is there ever not an oil

Is there ever not an oil spill? It's inevitable.

Interesting that the article

Interesting that the article does not broach whether in any of the spills, that the Government regulator, the Canada-Newfoundland and Labrador Offshore Petroleum Board, has investigated and found negligence, poor operating procedures or any other reason for these environmental polluting events. Have companies been fined, indited for prosecution or is it all wink, wink, nod, nod we'll just wait this out and let it go; it will blow over so just go on making your profits off of polluting the environment. A clean environment that we and the natural systems that support us provide, is absolutely essential to our and our ecosystems well being. Environmental laggerts need close regulation and consequences for their environmentally vandalizing activites to make sure that they take their environmental responsibilites when operationg most seriously!