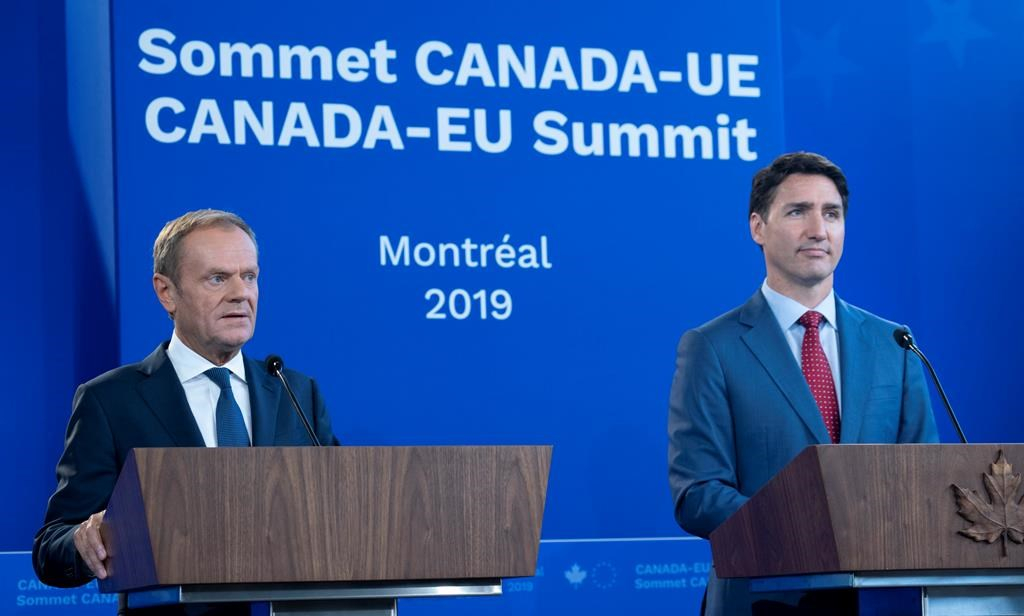 President of the European Council Donald Tusk responds to a question as Prime Minister Justin Trudeau listens during the closing news conference of the Canada-EU Summit in Montreal on Thursday, July 18, 2019. Photo by The Canadian Press/Paul Chiasson
Previous story

Earlier this week Jagmeet Singh, along with Green Leader Elizabeth May and five other Canadian and Quebec politicians, signed a letter urging lawmakers in France not to ratify the Comprehensive Economic and Trade Agreement, or CETA.

As an EU-Canada trade summit wrapped up in Montreal Thursday, Trudeau asked who Canada should trade freely with if not its European allies, calling the NDP stance "unfortunate."

"You have to ask the question of people like the NDP in Canada: If you don't think that we should have a free trade deal with Europe — as progressive, positive and aligned as they are — then with whom would the NDP want to sign a trade deal?" Trudeau asked.

The NDP also drew attention to a controversial CETA mechanism to resolve disputes between governments and investors, the International Court System, which New Democrat spokeswoman Nina Amrov called "undefined" and friendlier to corporations than taxpayers.

So far, 13 EU countries have ratified the pact, which nonetheless went into force provisionally in September 2017, eliminating tariffs on more than 90 per cent of goods flowing between Canada and the EU.

The benefits have been uneven, however, as European businesses ramped up exports right out of the gate while Canadian exporters were slower to boost trade.

In 2018, EU goods imports from Canada declined by two per cent to roughly $46 billion, though aluminum, motor vehicles and parts, and other sectors saw major gains. Meanwhile, EU exports to Canada shot up 10 per cent to about $62 billion last year, increasing the deficit in goods trade by more than two-thirds to $10.4 billion, according to the European Commission.

Agri-food exports to the EU have dropped 10 per cent since CETA's 2017 entry into force.

"The consequences of these non-tariff barriers are real — they're shutting out a significant portion of Canadian agri-food exports from the EU market," Innes said in a release.

Canadian exports of durum wheat to Italy dropped 68 per cent between 2016 and 2018, according to the alliance. Canadian pork and beef exports increased more than 100 per cent last year. "They appear to be impressive growth percentages but they are starting from a very small base and remain well short of the potential trade," Innes said.

European Commissioner for Trade Cecilia Malmstrom played down the imbalance, noting many exports have enjoyed higher consumption on the Continent.

"The lobsters have gone up — the frozen ones. In the local supermarket where I live, two years ago these frozen lobsters were only from Maine, and now there's not an American lobster to be found anywhere; they're all Canadian," she said in an interview.

Malmstrom acknowledged that other industries have been slower to respond. "It has taken the Canadian authorities and the beef producers a longer time to adjust to that. I think that with time it will catch up."

The commissioner said the rise of nationalism and trade tensions continue to pose a threat to international trade and the liberal order, but Malmstrom expressed optimism as she prepares to depart her post in October.

"The world is becoming an increasingly difficult place, in the trade area — the trade tensions that are there — but also a general question of certain basic fundamental rights and values, the belief in international organizations, the belief that you need certain global rules to defend all countries of the world," she said.

"We also saw a counter-reaction — more people voting in 25 years in the European Union, lots of young people mobilizing voting for pro-European parties from the left to the right," she said.