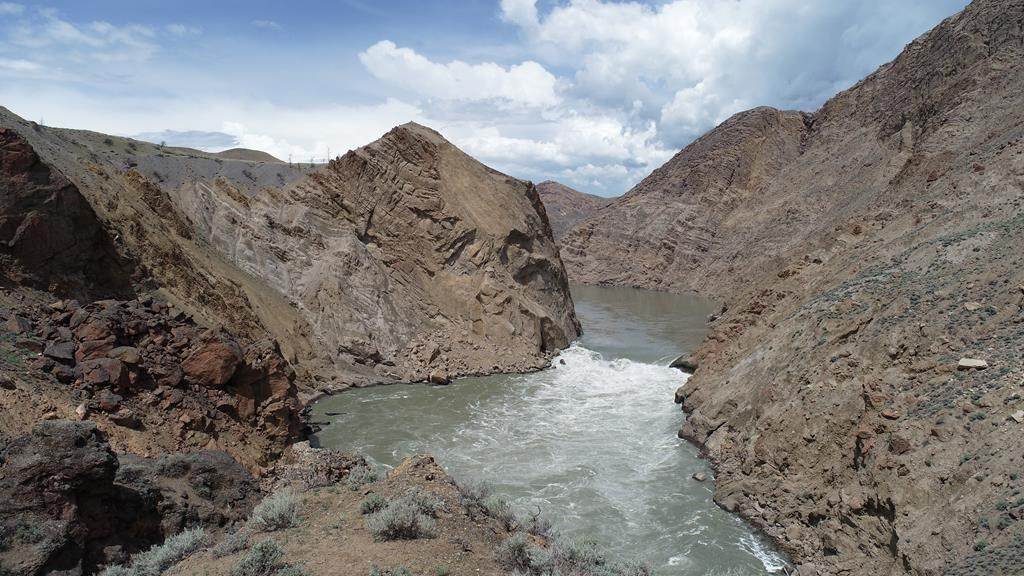 The site of the rock slide, centre, is seen in an undated handout photo along the Fraser River northwest of Kamloops, B.C. Handout photo by The B.C. Ministry of Forests, Incident Command Post
Previous story
Next story

The federal and British Columbia governments have made a joint commitment to do everything possible to make sure chinook, steelhead, coho and sockeye are able to reach their spawning grounds past a rock slide in the Fraser River.

The province says in a news release that Premier John Horgan briefed Prime Minister Justin Trudeau on the slide that threatens to block millions of returning salmon.

B.C. Forests, Lands and Natural Resources Minister Doug Donaldson says the team has developed a multi-pronged plan to save the salmon, some of which are already listed as species of concern.

The massive rock slide northwest of Kamloops narrowed the river and created a five-metre waterfall, holding back many fish that are swimming against the fast-flowing river in an effort to get back to spawn.

Federal Fisheries Minister Jonathan Wilkinson says the governments, along with First Nations communities, are working around the clock to do everything possible to see the fish pass safety through the site.

He says collaborative efforts that also involve Fisheries and Oceans Canada and the coast guard are crucial to give the salmon stocks the best chance of survival.

The Fisheries Department says the overall team is constructing a temporary aluminum fishway, testing options for transporting the fish by helicopter and truck and assessing the feasibility of new fish transport systems.

"As a result of these parallel planning efforts, the team will be able to escalate their response to changing conditions as they get better information on how successfully the salmon are passing the slide site."

Work to drop massive boulders into the water directly under a cliff was to begin this week, with the hope the boulders will form a series of pools that fish can use as resting places while hopscotching their way up the side of the waterfall.

The bucketing and boulder placement are just two of the proposals developed by the biologists, hydrologists, geotechnicians and others who have been working to save the fish.