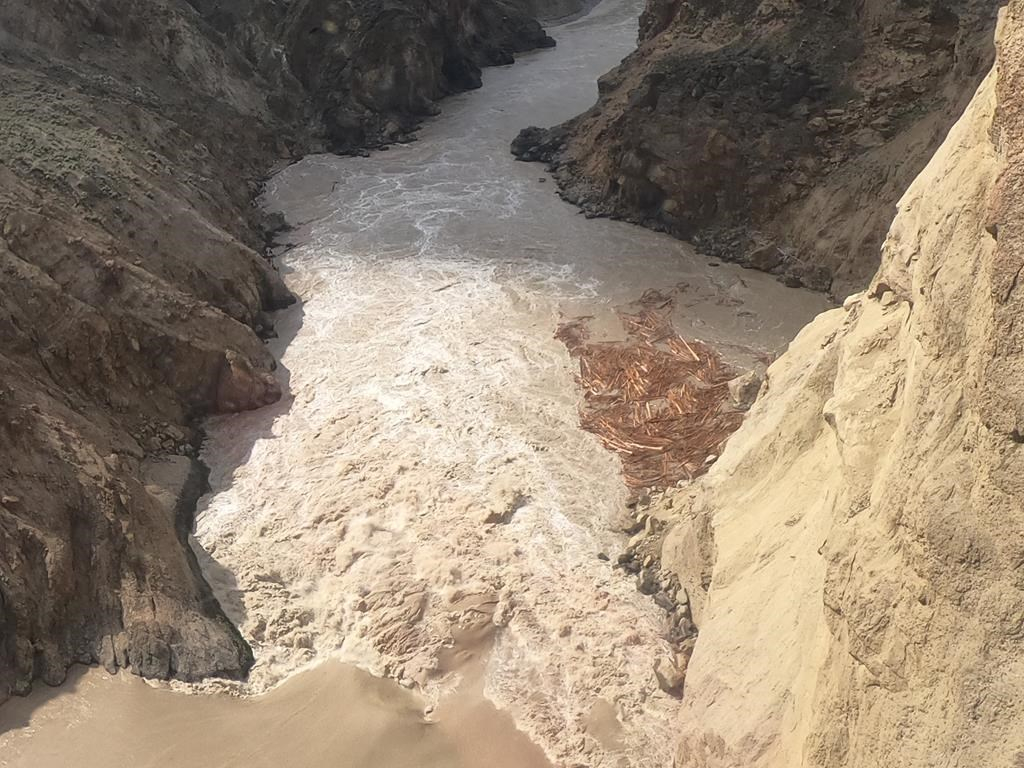 A rock slide on the Fraser River near Big Bar, B.C., has created a five-metre waterfall that is blocking the passage of salmon. Handout photo by Incident Command Post
Previous story

A major rock slide in British Columbia's Fraser River has prompted new restrictions to recreational and First Nations fishing of chinook salmon, as officials scramble to prevent long-term devastation of the population.

The slide in a remote area near Big Bar, northwest of Kamloops in the Interior, has created a five-metre waterfall that is blocking all but a small percentage of roughly hundreds of thousands of chinook from migrating upstream to spawn.

The measures announced Friday represent an "unquestionably difficult" decision in terms of the impacts on First Nations communities and on recreational fish harvesters, said Andrew Thomson, a regional director with the Department of Fisheries and Oceans.

"The potential for permanent loss of these chinook populations represents a greater threat to the livelihoods of all those who depend on salmon for sustenance and economic opportunity as well as for the wildlife that depend on them as a food source," he said.

Thomson said the department will implement a new maximum size limit of 80 centimetres for chinook retention in areas where chinook fishing was set to open on Monday.

He said the measure will help protect larger chinook that are having greater success making it past the rock slide area. The decision will be reassessed at the end of July, when the vast majority of chinook should have migrated past these areas into the Fraser River, he said.

Owen Bird, executive director of the Sport Fishing Institute of B.C., said he was "bewildered" by the new restrictions, which build upon previously announced conservation measures.

"The whole reason that the measures were put into place in the first place was to ensure that the Fraser River chinook had made it by and were in the river by that time," he said.

"We were coming up to this date. The fish, indeed, are for the most part in the river. ... It's not really a defensible action on scientific grounds."

Thomson also said the department is also working with First Nations to minimize chinook harvests above the slide site in order to ensure the maximum possible number of chinook that managed to pass through the barrier successfully reach their spawning grounds.

The measures fall short of what some First Nations and conservation groups had called for, but Thomson said the department wanted to take a balanced approach that protected chinook while still allowing recreational harvest to open on Monday.

Grand Chief Stewart Phillip, president of the Union of BC Indian Chiefs, said his group fully supports a call from the Fraser Salmon Management Council to immediately stop all recreational and commercial Fraser River salmon fisheries.

But he said he's pleased with an "unprecedented" level of collaboration between federal, provincial and Indigenous leaders and he expects more mitigation measures will be announced in the future.

"I believe that absolutely everyone realizes the magnitude of this crisis and the ramifications it represents," he said. "This could virtually wipe out the Fraser River wild salmon run."

The federal department and the B.C. government have been at the site since late June assessing the impact and trying to find a solution. They've installed acoustic monitoring equipment to get a sense of how many salmon are impacted because the muddy, turbulent water makes it difficult to count.

Experts are considering a number of options, including reducing the height of the falls or providing passage for fish through engineering and rock work. Another option would be moving the fish by truck from below the slide to above it, but the area is remote and has little road access.

Several salmon populations that use the river are already in peril and their numbers would severely decline if they are unable to spawn, said Aaron Hill, executive director of the Watershed Watch Salmon Society.

"People and wildlife depend on those salmon all the way from the West Coast to up into the Northern Interior and out to the Rocky Mountains," he said. "Further depletion of those salmon runs will have a profound impact."

Vincent Bryan, a Washington-based innovator behind a possible solution known as a "salmon cannon," said the problem is urgent because the fish will start arriving en masse in August and by the middle of that month there will be a million or more sockeye backed up.

Bryan's Washington-based company, Whooshh Innovations, has created a flexible, pressurized tube that moves fish over obstructions and he's been at the rock slide site assessing how the system could work there.

Asked how soon a fix was needed, he replied, "Last week."