Quebec has no plans to offer struggling SNC-Lavalin a bailout: Minister 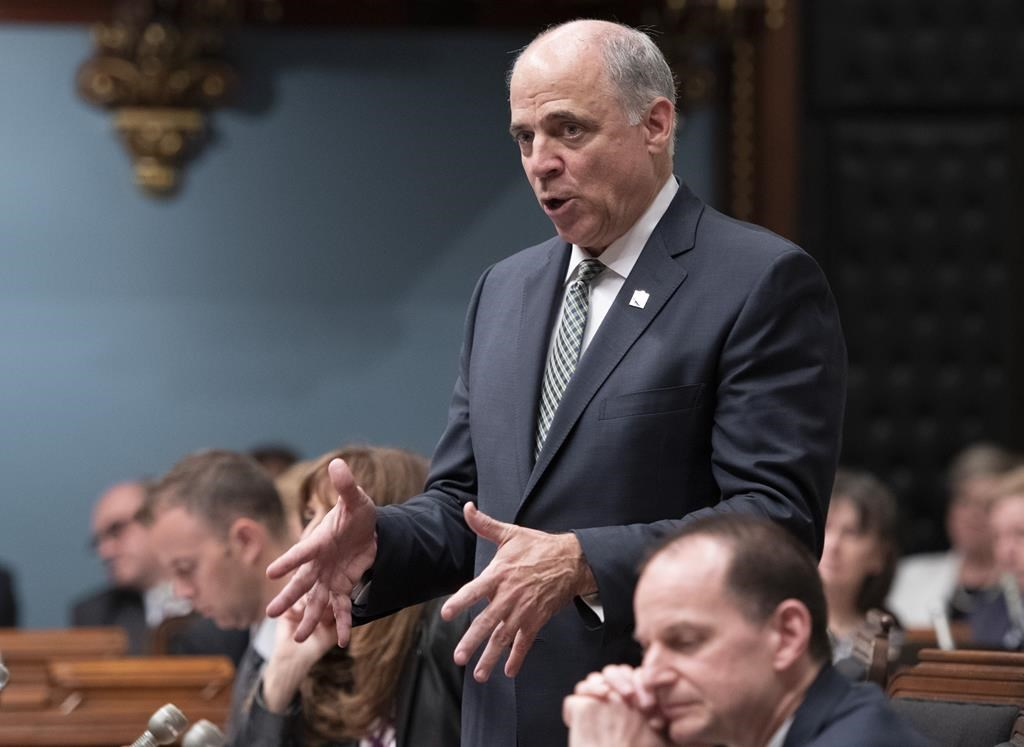 Quebec Economy and Innovation Minister Pierre Fitzgibbon responds to the Opposition during question period, on Tuesday, June 11, 2019 at the legislature in Quebec City. File photo by The Canadian Press/Jacques Boissinot
Previous story
Next story

"Despite the obvious operational problems...I don’t see the need for the Quebec government to intervene at the financial level," Fitzgibbon told reporters in Montreal days after the company revealed a $1.9-billion impairment charge and slashed its profit forecast for the third time this year.

The beleaguered company has also been the centre of political controversy this year over the handling of corruption charges levelled against it.

Fitzgibbon cited the Montreal-based company's pending sale of part of its stake in Ontario's 407 toll highway as proof of its ability to liquidate assets to shore up its balance sheet.

407 International Inc.'s two other owners — the Canada Pension Plan Investment Board and Cintra Global S.E., a subsidiary of Spanish multinational Ferrovial S.A. — are engaged in a legal battle over which one gets to scoop up the $3.25-billion stake.

"I’m optimistic, but it is a difficult period for them to go through," Fitzgibbon said of the firm.

The minister's stance marks a stark difference from the province's 2016 decision to invest $1 billion in Bombardier Inc. for its C Series passenger jet program — before the company sold a majority share to Europe's Airbus last year.

However, he left the door open to a bailout down the line, as SNC's falling share price leaves it increasingly vulnerable to potential hostile bids. SNC's stock has plummeted by more than 62 per cent over the past year, closing at $21.24 Wednesday, its lowest point in more than 14 years.

"If a transaction were required to save it from a hostile takeover, we could intervene," he said.

SNC's lower valuation could make the company more attractive to potential bidders, said Karl Moore, an associate professor at McGill University's business school. "On the other hand, their reputation has been hurt, and is that something you want to get involved with?”

"Organizations that would buy them would let them get all the bad news out of the way, let them get reordered and then visit them in a year or two, when it’s probably undervalued but it’s a more valuable property," he said.

On Monday the company said it is quitting the competitive field of fixed-price contracts, which leave companies vulnerable to cost overruns, as interim CEO Ian Edwards pivots toward a stabler business model based on engineering services.

The firm now expects core adjusted losses of between $150 million and $175 million in the latest quarter, far worse than analysts' previous expectations.

SNC-Lavalin faces a trial after allegedly paying $48 million in bribes to officials under Moammar Gadhafi and defrauding Libyan organizations of some $130 million between 2001 and 2012.

The company was at the centre of a drawn-out political controversy earlier this year following accusations by former attorney general Jody Wilson-Raybould that top government officials pressured her to overrule federal prosecutors in the Libya case and negotiate a deferred prosecution agreement, a kind of plea deal that would have seen the firm pay a fine rather than face prosecution.

Moore said those stains will surface repeatedly as the federal election in October nears. "It’s going to be an unpleasant time for SNC from a news viewpoint."

On Monday, Quebec's Caisse de depot, SNC's largest investor at nearly 20 per cent, took the rare step of publicly rebuking the firm, saying its recent performance "requires decisive and timely action" by the board.