B.C. murder suspect not a neo-Nazi, is more fascinated by Russia, dad says 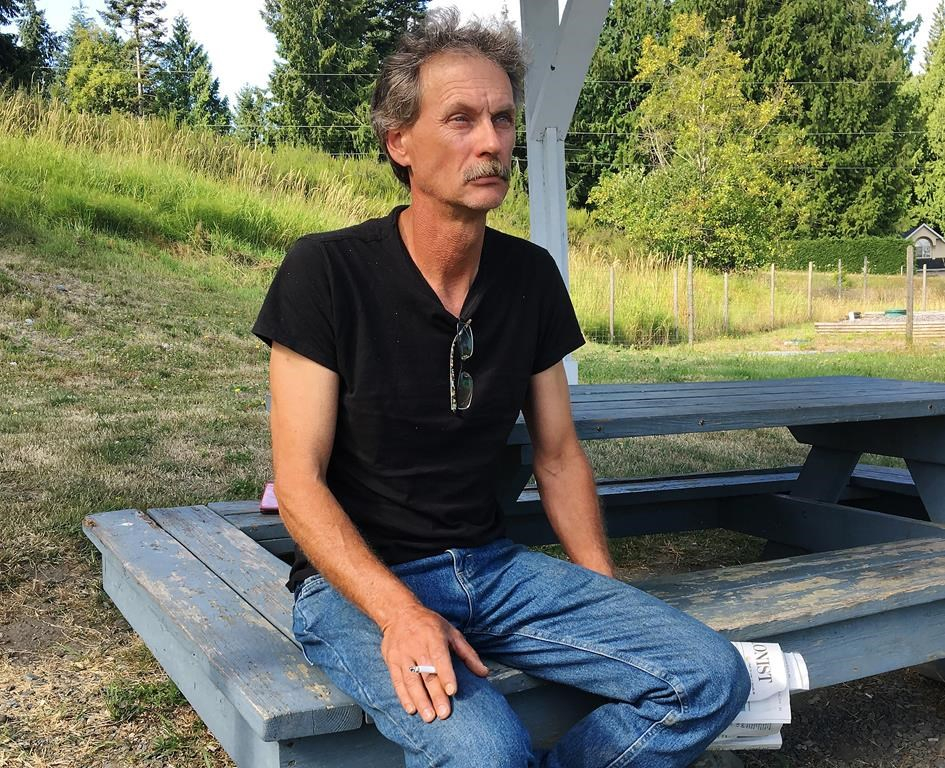 A murder suspect who allegedly sent photographs of a swastika armband and a Hitler Youth knife to an online friend was not a Nazi sympathizer, but he did think the memorabilia was "cool," says his father.

RCMP are investigating the photographs, which also show Bryer Schmegelsky, 18, in military fatigues, holding an airsoft rifle and wearing a gas mask.

The man is a suspect along with Kam McLeod, 19, in three murders in British Columbia.

Alan Schmegelsky said Thursday that his son took him to an army surplus store about eight months ago in his small Vancouver Island hometown of Port Alberni, B.C., where the teen was excited about the Nazi artifacts.

"I was disgusted and dragged him out," Schmegelsky said. "My grandparents fled the Ukraine with three small children during the Second World War."

The teens are charged with second-degree murder in the death of one man and are suspects in the fatal shootings of a young couple. On Thursday, the manhunt was focused on the thick and boggy forests of northeastern Manitoba.

Despite his son's fascination with the collectibles, Schmegelsky said he didn't believe his son identified as a neo-Nazi.

"He thought he was Russian. Germans are their enemies," he said.

The father, who is estranged from the teen's mother, explained that he didn't see his son between the ages of eight and 16, and during that time the boy came under the mistaken belief that he had Russian heritage.

"I argued with him about that, in a friendly manner," the father said. "He liked strong speakers."

Schmegelsky said it was possible his son went back to the store later to buy the memorabilia, but it's also possible he took a photo in the store or that it's staged.

The army surplus store, called Harreson's Military Store, has since closed and the former owner didn't immediately respond to a request for comment.

Alfred Bergkvist, owner of "A" Company Military Surplus in nearby Coombs, said he purchased all of Harreson's merchandise, including some Nazi material, when it closed.

Bergkvist said he didn't recognize the red Nazi armband in the photograph but his store also stocked Hitler Youth knives identical to the one in the picture.

He recalled that two boys came into his store about three weeks ago and bought one of the replica knives that are inscribed with the German words for "blood and honour."

"They were really excited about it," he said, adding he didn't know whether the pair were Schmegelsky and McLeod and he doesn't have security cameras.

Schmegelsky allegedly sent the photos to a user of the video-game network Steam. The two suspects most recently logged onto their accounts 13 days ago, about the time they told family they were leaving Port Alberni in search of work.

Schmegelsky's account shows he frequently played a shooting game called Russia Battlegrounds, and both young men's Facebook pages were connected to an account called Illusive Gameing, which has a modified Soviet flag as its icon.

Herb Loomba, owner of the Redford Motel in Port Alberni, said the elder Schmegelsky stayed there about once a month while visiting his son, and he last saw the teen with his dad on his graduation day, wearing a nice suit.

Loomba said the news has disturbed everyone in the small, close-knit community.

"Anything happens, it feels like it's happening in your own home," he said.

Officers from the western provinces and Ontario were in the Gillam area of northern Manitoba to search for the teenagers on Thursday.

RCMP Cpl. Julie Courchaine said there were two confirmed sightings of the teens before an SUV police believe they had used to drive to Gillam was found burned out on Monday.

"There have been no stolen vehicles in that area," she said. "At this point in the investigation, we believe they are still in the area."

The terrain is unforgiving, Courchaine said.

"There's lots of dense bush, forest, swampy area, so it is very challenging," she said.

RCMP have been asking people not to approach Schmegelsky and McLeod if they see them and to call police instead.

More than 80 tips had come in over the last 40 hours alone, Courchaine said.

To the north, the mayor of Churchill — a community accessible only by rail, sea and air — warned residents to be on the lookout.

"We should all remain vigilant and report any and all suspicious activity directly to the RCMP," Mike Spence said in a statement.

Police charged the two young men Wednesday in the death of University of British Columbia lecturer Leonard Dyck, whose body was found July 19 near their burned-out truck in northwestern B.C.

Patrick Martone, a professor in UBC's botany department, said in a statement that he was lucky to know Dyck, whose gruff exterior belied a natural curiosity and enthusiasm.

"His passion for learning about bizarre and beautiful organisms that few people ever get to see inspired our students to feel that same passion and awe," Martone said.

Dyck began working for the university as a sessional lecturer in 2003 and completed his PhD the next year. His behind-the-scenes efforts in the department, his field collections and his work with students in the classroom make him irreplaceable, said Matrone.

"Mostly, I will miss Len's laugh, which often followed some wry comment. It makes me tear up thinking that I won't get to hear that again," he said.

"He held his cards close to his chest, but as soon as you realized how much passion he had for his work, he was so much fun and a joy to be around. It was obvious that he was doing what he loved. He was a really special man."

The bodies of Australian Lucas Fowler and his American girlfriend Chynna Deese were found four days earlier along a highway more than 450 kilometres from where Dyck was discovered.

— With files from Kelly Geraldine Malone in Winnipeg.

Father of suspect in 3 B.C. deaths expects son will go out in 'blaze of glory'