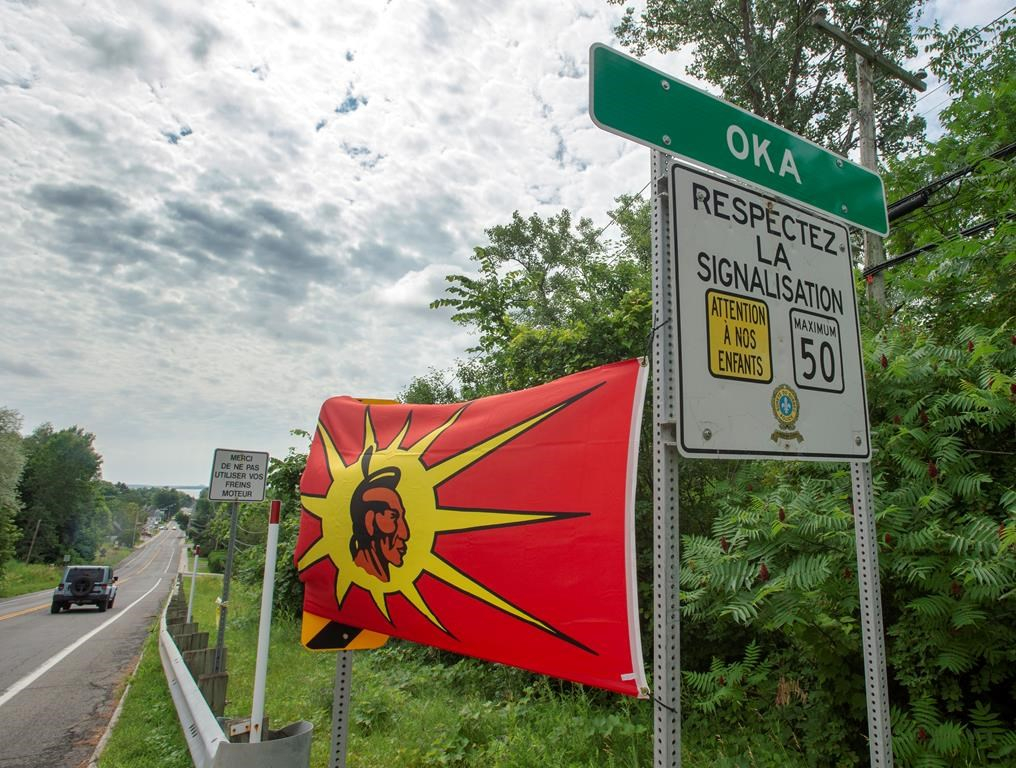 Mohawk flags are placed at the border of the Kanasatake Mohawk territory and the town of Oka on July 19, 2019 in Oka, Que. File photo by The Canadian Press/Ryan Remiorz
Previous story

Kanesatake Grand Chief Serge Simon said Friday he's decided to cut off all talks with Oka Mayor Pascal Quevillon after the mayor refused to apologize for derogatory comments about the First Nations territory.

Simon and his band council met with federal and provincial governments earlier in the day in an attempt to defuse tensions over a land dispute between Kanesatake and neighbouring Oka, northwest of Montreal.

As he left the discussions, Simon said he and his council had decided "we were not going to give the mayor any more importance."

"Yes the bridges are cut," Simon told reporters alongside Ghislain Picard, Assembly of First Nations regional chief for Quebec and Labrador. "We'll have no more discussions with him. My council agrees with me."

Emotions have run high since news broke of local developer Gregoire Gollin's intention to donate the 60 hectares known as The Pines to the Kanesatake Mohawk Council. Quevillon offended many on the territory when he raised concerns about becoming encircled by Kanesatake.

Quevillon has said property values would decline and raised fears of illegal dumping and an expansion of cannabis and cigarette merchants.

Oka's mayor met with Miller and D'Amours following their discussions with the First Nations leaders. On his way into the office tower, Quevillon told reporters he didn't know what he was supposed to be apologizing for.

"What I understand is that I used words like smoke and pot shacks," he said. "That's the reality unfortunately. What we are seeing is the reality."

Quevillon said the Mohawks claim the land on which his town is settled, and his population feels as if they have been taken hostage.

"It's 300 years that Oka is there, and we're being told that, finally, these are lands that belong to the Mohawks," he said.

Simon said Quevillon's comments Friday morning made things worse. "He made it clear he's not going to apologize about what he conceives as the truth when he describes my community," Simon said.

Despite the conflict with the Oka mayor, Simon said he had positive discussions with Miller and D'Amours. He said they talked with him about opening up more formal lines of communication between his council and the federal and provincial governments regarding land claims and expanding Kanesatake's territory.

But, Simon said, any discussion about the expansion of Kanesatake is premature. His people will need to be consulted and vote on whether or not to accept any donations of land that the Mohawks already claim as theirs.

"Our community still has to decide," Simon said. "I think the mayor pressed the panic button a little too quickly."