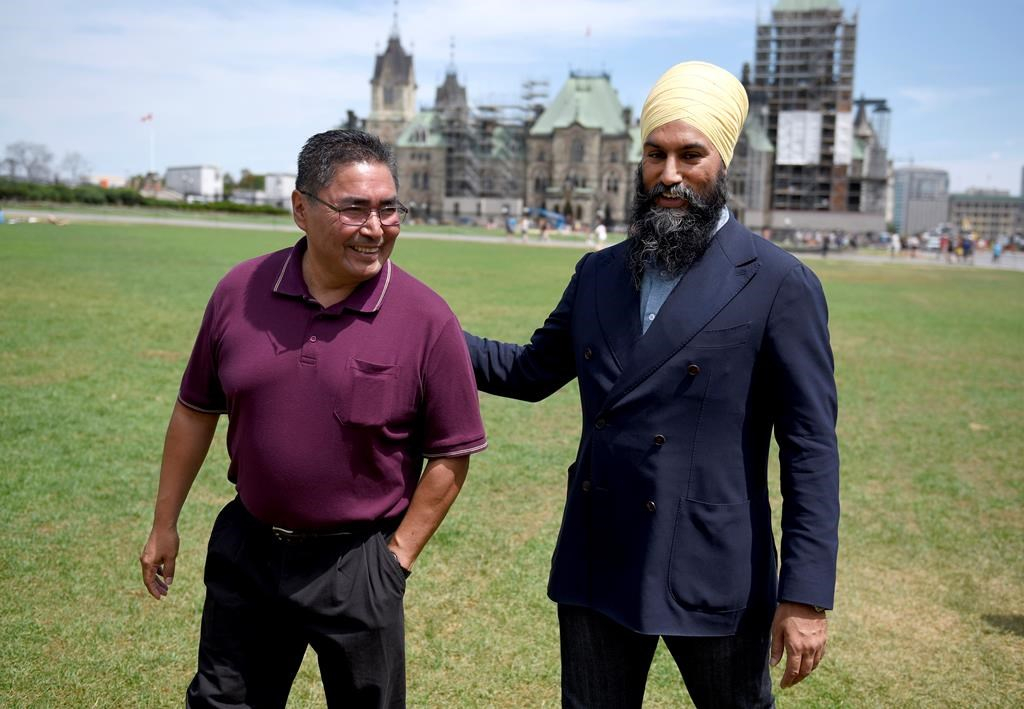 Jagmeet Singh walks with Chief Rudy Turtle of the Grassy Narrows First Nation after announcing his candidacy for the NDP in Kenora, Ont. for the fall election, on the lawn of Parliament Hill in Ottawa on July 29, 2019. Photo by The Canadian Press
Previous story

With a federal election campaign just weeks away, NDP Leader Jagmeet Singh scored a blow against Justin Trudeau's Indigenous bona fides Monday as he introduced a prominent First Nation chief as one of his party's candidates in northern Ontario.

Grassy Narrows Chief Rudy Turtle joined Singh on the lawn of Parliament Hill under a scorching July sun, promising to hold the prime minister's feet to the fire on his signature pledge to reset Ottawa's relationship with Indigenous Peoples.

The situation in Grassy Narrows, which has been tormented by mercury poisoning for more than a generation, speaks to the disconnect between Trudeau's words and the actions of his government, said Singh, who assailed the Liberals for failing to make good on a promise to develop a treatment facility in the community.

It was the Trudeau government's "inaction" on the facility, promised by former Indigenous Services Minister Jane Philpott in late 2017, that prompted him to run for the NDP, said Turtle, described by Singh as a passionate voice for his community and an important one for New Democrats.

Philpott, who now sits as an Independent MP, has been urging her former government colleagues to get moving on the plan.

Grassy Narrows First Nation has been dealing with mercury contamination ever since a paper mill in Dryden, Ont., dumped some 9,000 kilograms of the toxin into the English-Wabigoon River system in the 1960s.

Those afflicted with mercury poisoning suffer from impaired peripheral vision, hearing, speech, and cognitive function. Other symptoms include muscle weakness, numbness or stinging pain in the extremities and mouth.

Earlier this year, Turtle publicly called for the federal government to put $88.7 million — the estimated 30-year cost for the facility — into a trust fund to ensure a treatment facility project could go ahead no matter the election results.

"It's been a very difficult situation where they've done everything to stall this process and make it go slow," he said. "I'm getting worried that it might not even happen."

In May, the federal government expected to sign a memorandum of agreement during a much-anticipated visit to the community by Indigenous Services Minister Seamus O'Regan, but Turtle said the deal didn't happen because the community needed more from the government.

Turtle said he did not decide to run for the NDP until he was approached about the prospect during the recent Ontario NDP convention in June, held in Hamilton, Ont., where Singh released the party's platform.

O'Regan's office said Monday it remains steadfast in its commitment to build a health facility for Grassy Narrows. A technical team has been holding meetings to discuss the plans, the latest of which took place last Wednesday, a statement said.

Discussions with the chief and council will continue "until we reach a consensus"and ensure the facility is built, it continued.

"Work is underway between all partners — the province, our government, and the community — to ensure the necessary health services are in place for the facility itself."

The work with the technical team has been slow and there continues to be disagreement on design and funding, Turtle said. The community is proposing a $19-million plan, while the federal government is looking at around $10 million, he added.

"It is just inadequate and it doesn't address the specialized care that we need."

O'Regan's office offered no specific comment on Turtle's political aspirations, saying only it wants development of the facility to proceed "without distraction or delay."

Turtle will be challenging Bob Nault, a former Liberal cabinet minister who is running again for the party in the northern Ontario riding.

New Democrats have a strong history of support in Kenora, said Singh, who described the riding as key to the party's fortunes. In 2015, Nault defeated former provincial NDP leader Howard Hampton, who earned 34 per cent of the vote to Nault's 36 per cent.