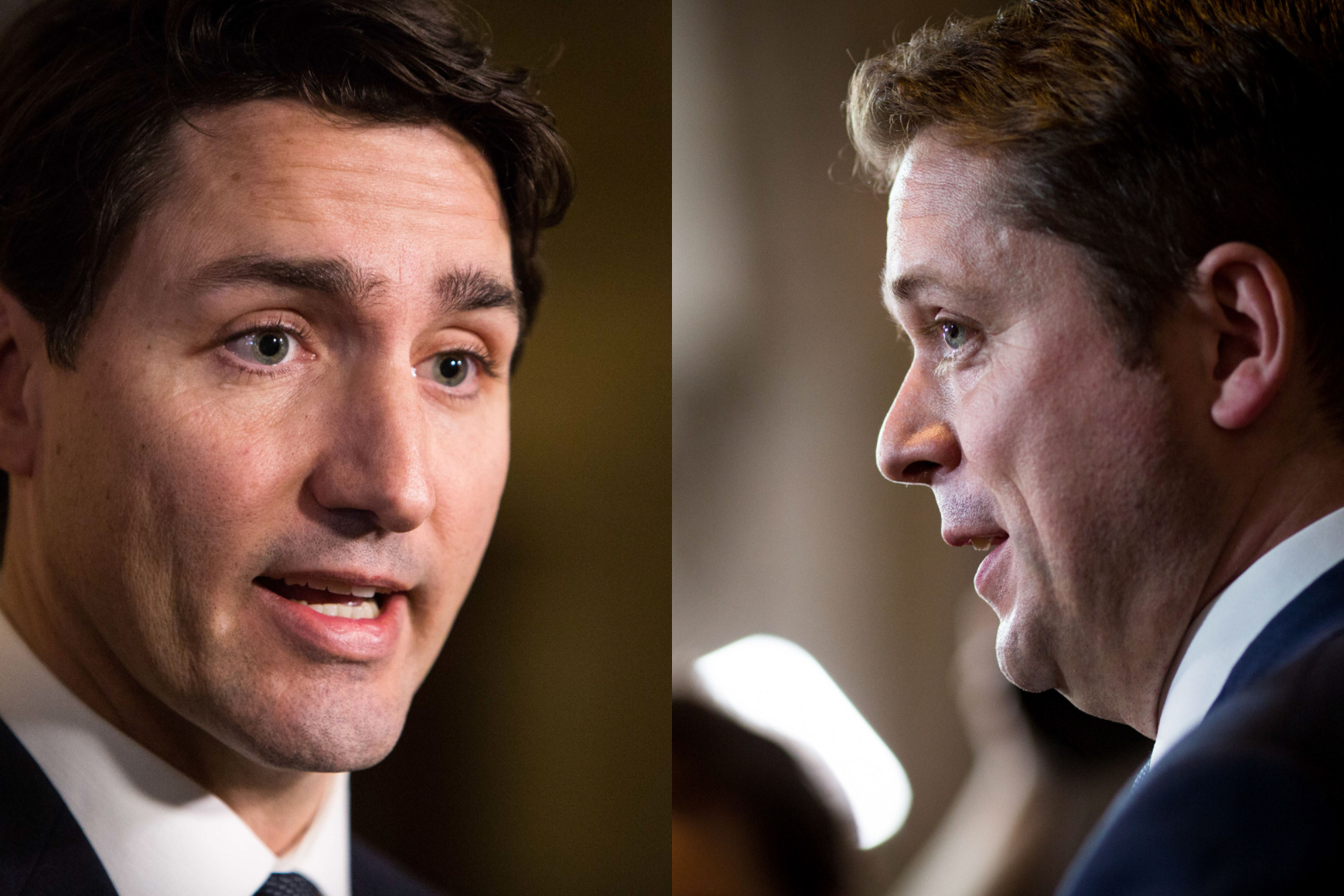 File photos of Prime Minister Justin Trudeau and Conservative Leader Andrew Scheer by Alex Tétreault. Environment is emerging as a key issue in the upcoming federal election, a new study has found.
Previous story
Next story

Canadians aren’t as divided into partisan echo chambers as social media would suggest, but a heavy news diet doesn't guarantee you'll be informed, a new study has found.

Though voters are worried about the rise of a hyper-polarized political landscape in which news consumers are pushed toward partisan sources, people across the political spectrum appear to be reading the same news sources. They trust those sources nearly as much as they trust their friends, and overall levels of misinformation in Canada are low.

Still, there are “troubling” disconnects in Canada’s media ecosystem, according to the report released early Thursday by the Digital Democracy Project, a joint initiative by the Public Policy Forum and the Max Bell School of Public Policy at McGill University.

Despite being only moderately informed about key policy issues, Canadians are relatively confident they know enough to cast their vote. Journalists are focusing coverage on issues that aren’t on the general public’s radar. And the people who consume the most media — through social networks and, to a lesser extent, traditional sources — tend to be the most misinformed.

“People consume media in a way that actually increases their misinformation,” said Peter Loewen, a political science professor at the University of Toronto who led the study’s survey analysis team.

“It's not a dramatic effect. It doesn't map onto the kind of echo chambers we're seeing in the United States, but it is an effect.”

The Digital Democracy Project is studying how information and disinformation flow through journalistic and social media channels in the run-up to the October federal election. Thursday's report is one of several the group plans to release before the election, and is based on two data sources: an online panel survey of more than 1,000 Canadians, and about one million tweets posted from June 3 and July 26.

“We're hoping that during the election, that pairing of analysis will provide sort of this research-based evidence into the public discourse through the election,” said project director Taylor Owen, an associate professor at the Max Bell School of Public Policy.

The tweets came from accounts belonging to political candidates, approximately 300 political journalists and members of the public who used the Canadian political hashtags #cdnpoli, #polcan and #elxn43. The data included only publicly available tweets. (Though the group plans to include third parties, they were excluded from this first report as the category is “in flux,” the report says.)

The survey asked respondents about their beliefs, the news sources they read and questions designed to test their knowledge of key issues. It was conducted in the last week of July, and data within regions were weighted by gender and age, based on 2016 census information.

“It's going to be very useful for us, understanding exactly what the relationship is between the eventual outcome of the election and the media ecosystem,” Loewen said.

Political echo chambers aren't such a big problem for the upcoming federal election, a new study has found. But Canadians are consuming media in a way that increases misinformation. Story by @EmmaMci #cdnpoli #elxn43

The report also is intended to set a baseline for measures the group will be tracking throughout the election, the researchers said.

The project shared its findings with reporters in a conference call the morning before its public release.

Consuming news at all is associated with misinformation

Reading the news increased the likelihood that the respondents would have an answer to the questions. Though this did result in more correct answers, it also led to even more incorrect answers on average, leading to more of what the researchers called “net-incorrect” results. The effect was worse when respondents got their news from social media.

“It appears that simply consuming news, regardless of source, makes people susceptible to being misinformed about the issues,” the report says.

Part of that likely has to do with the influence of partisanship, which drives citizens to tightly latch onto their beliefs and identities, the report says. The survey found that the stronger the respondents’ partisan beliefs, the more likely they were to give wrong answers regardless of whether they read the news.

“A person who is consuming a lot of news because... they have high partisanship can find reasons to get the wrong answer,” Loewen said. “Those who care about politics and have a side in the debate are going to be motivated to seek out information which confirms their sides.”

The echo chambers might not be that bad, actually

For years, analysts have warned that news readers are turning to sources that support their political leanings. Examples include the far-right website the Rebel, or the left-wing Rabble. More recently, that group of partisan news sources has grown to include ascendant website the Post-Millennial, which a CBC investigation found has direct ties to Conservative politicians.

But the Digital Democracy Project survey found Canadians of all political stripes reported reading essentially the same sources. The CBC, CTV and HuffPo were all among the top five for Conservatives, Liberals and New Democrats.

However, the partisan media sites were far more prominent when the researchers looked at which stories are shared by the public on Twitter using the Canadian politics hashtags. Four of those sites were in the top 20 most frequently shared, despite not cracking the top 20 overall news sources.

This discrepancy could be caused by the survey reaching people who aren’t on social media, Ruths said. It could also mean that survey respondents misremembered where they were getting their news from.

“One of our goals is certainly, in the next report or two, to actually look more into this,” Ruths added.

The survey also found that Canadians trust mainstream news outlets only slightly less than political information they hear from friends. On a scale of one to 10, where 10 is the highest level of trust, Canadians ranked news outlets as a 5.8 and friends as six.

Mainstream news outlets also beat political parties and social media in terms of trust. Political parties scored a 4.8 out of 10, with 18 per cent believing parties are more trustworthy than news, while social media scored 3.3. Canadians seemed very pessimistic about the “capacity of social media to deliver objective, reliable information during the campaign,” Loewen said.

The survey respondents had similarly “lukewarm” confidence that the next election will be free from foreign interference, ranking that at 5.3 out of 10. The idea that the federal government will identify and address such interference was similarly low at 5.5, though Liberal supporters had more confidence than New Democrats or Conservatives.

The environment is the dominant issue for Canadians ahead of the federal election, the survey found.

“This marks a sea change from times when the economy and health care were overwhelmingly cited as the key issues for Canadians across the political spectrum,” the report says.

Still, both issues remained high on the list. Health care and the economy were the top priority for 18 per cent, respectively, while the environment ranked first for 19 per cent of respondents.

Overall, the survey asked Canadians about eight potential election issues: the environment, health care, the economy, taxes, immigration and refugees, ethics (including issues such as the SNC-Lavalin scandal), infrastructure and foreign affairs.

Levels of environmental concern varied across partisan lines. Six per cent of Conservatives ranked environment as their most important issue, as opposed to 20 per cent of Liberals and 26 per cent of New Democrats.

On Twitter, journalists and political candidates reflected the public’s environmental priorities, with both groups posting most often about that issue over the past two months. But beyond that, the three groups were disconnected on which areas they felt were most important.

Journalists stressed ethics and foreign affairs, while candidates focused on infrastructure, foreign affairs and ethics — the three lowest-priority issues for the public, the survey found.

“For example, less than one in 20 Canadians identify government ethics as their most important issue in the upcoming election, and yet that consumes something like nearly 30 per cent of media news coverage,” Loewen said.

“This combination of social media data and monitoring and our surveying individuals will allow us to, over the course of the campaign, understand just how well movement is between what citizens are saying is important to them and what's actually being discussed during the campaign.”

Here's the link to the report

To consume the news means

To consume the news means your are misinformed says it all for Mainstream Media.
Its really boring, and dull wiitted too.
Is that the goal? Or do they really care at all.
Truth is stranger than ficition as they say , and Mainstream Media is missing the beat.