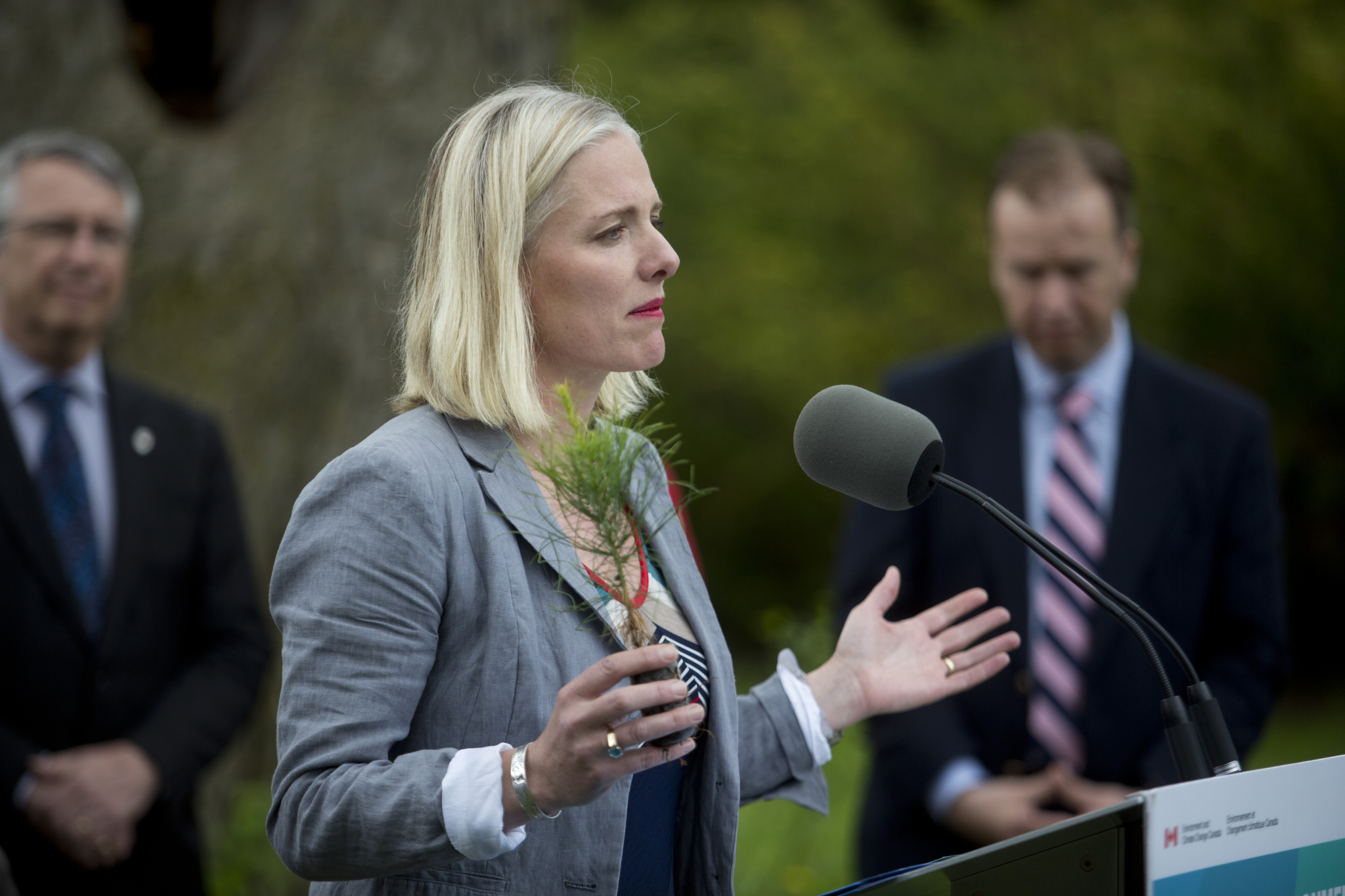 Environment and Climate Change Minister Catherine McKenna makes an announcement at the Dominion Arboretum in Ottawa on June 5, 2019. Photo by Andrew Meade
Previous story
Next story

Environmental groups have given Prime Minister Justin Trudeau's government a passing grade on its efforts to restore protections to Canada's natural habitats, which the Liberals say are in jeopardy if the Conservatives return to power following this fall's federal election.

"The overall takeaway (is) that the government has done a pretty good job — better in some areas, worse in some," said Stephen Hazell, director of policy and general counsel at Nature Canada.

The report card is the first of its kind, according to Hazell. It examines six major changes to four major environmental laws passed in 2019 — averaging roughly a B grade across the board.

Hazell said the grading in Nature Canada's report card was assessed based on what the environmental community thought was needed to deal with each of the issues at hand, and the extent to which the government fulfilled its 2017 promises.

"We did it partly because there had been such a flurry of environmental laws enacted by Parliament in 2019," Hazell said in an interview. "The last time there was anything similar was 2012 with the Conservatives... when they basically trashed all environmental regulations.

"This sort of thing doesn’t happen very often," he added. "It's very rare that you get a government that’s as interested in dealing with environmental law issues as the Trudeau government was in 2019."

The Trudeau government proposed sweeping amendments to Canada’s environmental laws in 2017 to reverse a series of "very controversial" changes implemented by the Harper administration in 2012, which immediately cancelled about 3,000 environmental assessments.

During the 2015 election campaign, Trudeau committed to restoring credibility to the environmental assessment process and launched a series of advisory panels and consultations to help create new legislation.

One of his underlying goals was to manage environmental reviews under a transparent process that makes it easier for the public to participate, and urges federal officials to consider all economic, social and health effects of a project, including effects on Indigenous Peoples.

"Under Stephen Harper the protections for fish and fish habitat were lost when the Fisheries Act was revised in 2012," Fisheries and Oceans Minister Jonathan Wilkinson told National Observer in an email. "That was part of a broader agenda with respect to fisheries and the environment where we saw significant layoffs of scientists, significant layoffs of protection officers, the closures of Coast Guard facilities including the Kitsilano Coast Guard base and $100 million in operating budget reductions."

The Harper cuts to environmental protects also "gutted the scientific capacity of the department such that ideologies started to play far more of a role than science and evidence," he said.

Wilkinson thanked "the thousands of Canadians from coast to coast to coast who participated in the consultations that were incredibly important in informing the changes" made to the Fisheries Act and other environmental legislation, calling them "a promise made and a promise kept."

"The Conservatives made it harder, not easier, for major projects to be developed in Canada," Caroline Thériault, spokeswoman for McKenna, said in a statement to National Observer. "That’s why Canada urgently needed better rules, and why we’ve worked hard since Day 1 to restore public trust in how decisions about resource development and other major projects are made."

In an emailed statement to National Observer, Scheer’s spokesman disagreed with this characterization.

“Justin Trudeau’s report card on the environment gets a failing grade from everyday Canadians struggling to make ends meet and get ahead," wrote Daniel Schow.

"The Trudeau Liberal carbon tax increases the price of everything from home heating, gas and groceries while doing nothing to reduce emissions and meet our Paris targets.”

Hazell said the process to create the report card did find some flaws in the political process as it pertains to environmental legislation.

For instance, many of the changes to these bills were proposed by the Senate, the majority of which were "anti-environment," he argued.

"The Senate has become the problem. That’s the place where good environmental law would die if we didn’t have a government committed to this file," he said.

Hazell also said that, despite the passing grade report card, more work needs to be done.

In an Aug. 2 letter to Trudeau, a coalition of environmentalists including Hazell urged the prime minister to expand the project list subject to environmental assessments.

"We are keenly aware of the upcoming federal election, and (the) closing of a window of opportunity for dramatic action on the project list," the letter reads.

Here are the grades for the major environmental laws that were passed:

This act established a single federal agency to ensure public participation in the approval process of any energy project, pending cabinet approval. The new agency would look at the social and health aspects of a project, as well as the effects on the economy, environment and Indigenous Peoples.

It also included a "climate test" (how the project affects Canada's ability to meet its climate targets) — the first time such a thing has been included in federal legislation.

Hazell said they were disappointed the Senate brought an amendment that allowed the agency to select the members of the review panels, and only designated projects were subject to this agency. For example, it excluded pipeline assessments to those 75 kilometres or more.

The Liberal government reinstated this act after the Harper Conservatives axed it, thus restoring important protections for fish habitat. The act also created new requirements to rebuild depleted or threatened fish populations, and a more transparent process to approve any projects/activities that would harm fish or fish habitat.

The act also bans the import and export of shark fins, and includes a mandatory review every five years for any changes.

Hazell said environmentalists were disappointed in a provision removed by the Senate that ensured water flows would also be a protected habitat.

This act extended protections for any project happening near navigable water, requiring all such projects to receive federal approval.

This act created the role of Canadian energy regulators and also established a group of independent commissioners responsible for timely and transparent project reviews and decision-making.

This was a straightforward bill, Hazell said, and accomplished what it was designed to: temporarily protecting Canada's oceans for up to five years as a step to permanent Marine Protected Area protection.

This act protected the northern British Columbia coast from major oil spills by banning tankers carrying more than 12,500 tonnes of crude oil from being in the area. A Senate committee voted against the bill, but it narrowly passed the full Senate in June.