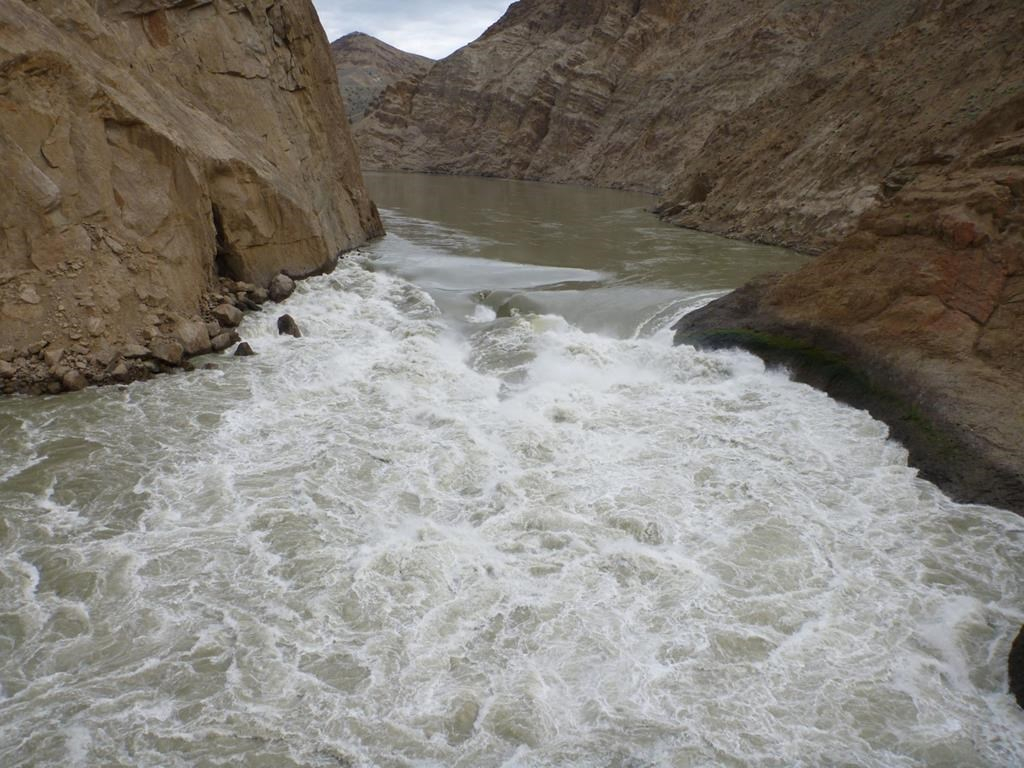 A slide in the Fraser River in B.C. that could block the salmon run is shown in a handout photo. Handout photo by The Department of Fisheries and Oceans
Previous story
Next story

Time is critical to find a solution to a massive obstruction in British Columbia's Fraser River as 90,000 salmon wait downstream and an estimated two million more sockeye are about to arrive, federal Fisheries Minister Jonathan Wilkinson said Tuesday.

The minister said dozens of people are working against the clock looking for ways to clear a path that allows salmon to get through the area where a massive rockslide came down in the river northwest of Kamloops.

The slide was discovered in June and has created a five-metre waterfall nearly impassable for the salmon.

"We don't have a lot of time," Wilkinson said during a news conference. "A number of the chinook runs are already circling and waiting to get up. The sockeye run, which is perhaps two million, will start to arrive within a couple weeks. So, we expect somewhere between 3,000 and 6,000 fish per day arriving below the rock slide."

He said rock scalers, engineers and blasters are trying to find a solution to the natural disaster.

"It is imperative we do whatever we can to enable as many fish as possible to pass through the slide to secure sustainability of these runs, and obviously the communities who rely on these stocks," Wilkinson said. "This is obviously a very challenging situation, one that could have long-term consequences for the communities on the river and far beyond."

He said the salmon, including dwindling chinook stocks and valuable sockeye, use the river to get to spawning areas in tributaries throughout central and northern B.C.

The salmon are vital to B.C.'s Indigenous people as food and ceremonial sources and provide thousands of jobs in the province's commercial and sport fishing industries.

The longer the salmon are delayed by the slide, the less energy they'll have to reach their spawning areas because they don't eat once they enter the river from the ocean, Wilkinson said.

"They certainly can't sit below the rock slide forever."

Wilkinson said the crews at the site are working to move boulders to create a safe route for the fish.

Helicopters are netting salmon in buckets, with about 5,000 moved so far. A fish ladder has also been constructed to help salmon past the slide site but treacherous river conditions are preventing its installation.

Grand Chief Ed John of the First Nations Summit, one of the largest Indigenous organizations in B.C., said he visited the slide site and is concerned about the devastation it could cause.

"It is a complete natural disaster we have in front of us," he said. "To call it a rock slide is an underestimation. It's actually a big landslide that's now created a blockage in the river."

John, who is a member of a north-central First Nation that depends on Fraser River sockeye, said the slide is an emergency that impacts indigenous and non-indigenous people and the salmon as a species.

"Time is a critical factor now," he said.

The Tsilhqot'in Nation near Williams Lake declared a local state of emergency Tuesday due to the threat of the slide to the salmon fishery, a primary food source for the First Nation.

The Tsilhqot'in called on the Department of Fisheries and Oceans to stop all marine and recreational fisheries for salmon that are destined to spawn past the slide site.

Doug Donaldson, B.C.'s forests, lands and natural resource operations minister, said almost 200 sockeye from the Early Stuart run were removed from the slide area and taken to a provincial hatchery to preserve the gene pool.

By The Canadian Press | News, Politics | August 1st 2019
State Of The Animal

And this is the unstable

And this is the unstable terrain through which human engineers propose to pass toxic bitumen in a pipeline entirely vulnerable to the destructive, unpreventable earth movement inevitable in tectonically active zones.

A definition that describes the Rocky mountains in spades. Avalanches, landslides, earthquakes are endemic to this part of Canada. Yes, blocking the Fraser river IS a natural disaster but water will inevitably breach this obstruction - but not perhaps in time to preserve the Salmon runs and that will be an ecological disaster.

But what caused the "natural

But what caused the "natural disaster"? And why don't governments (those with knowledge) disclose this information? Not a natural disaster, but a human error caused this impasse. I'm sure the lawsuits have already been drafted. So sad that something as beautiful and life-giving as salmon becomes extinct because of " human" behaviour.