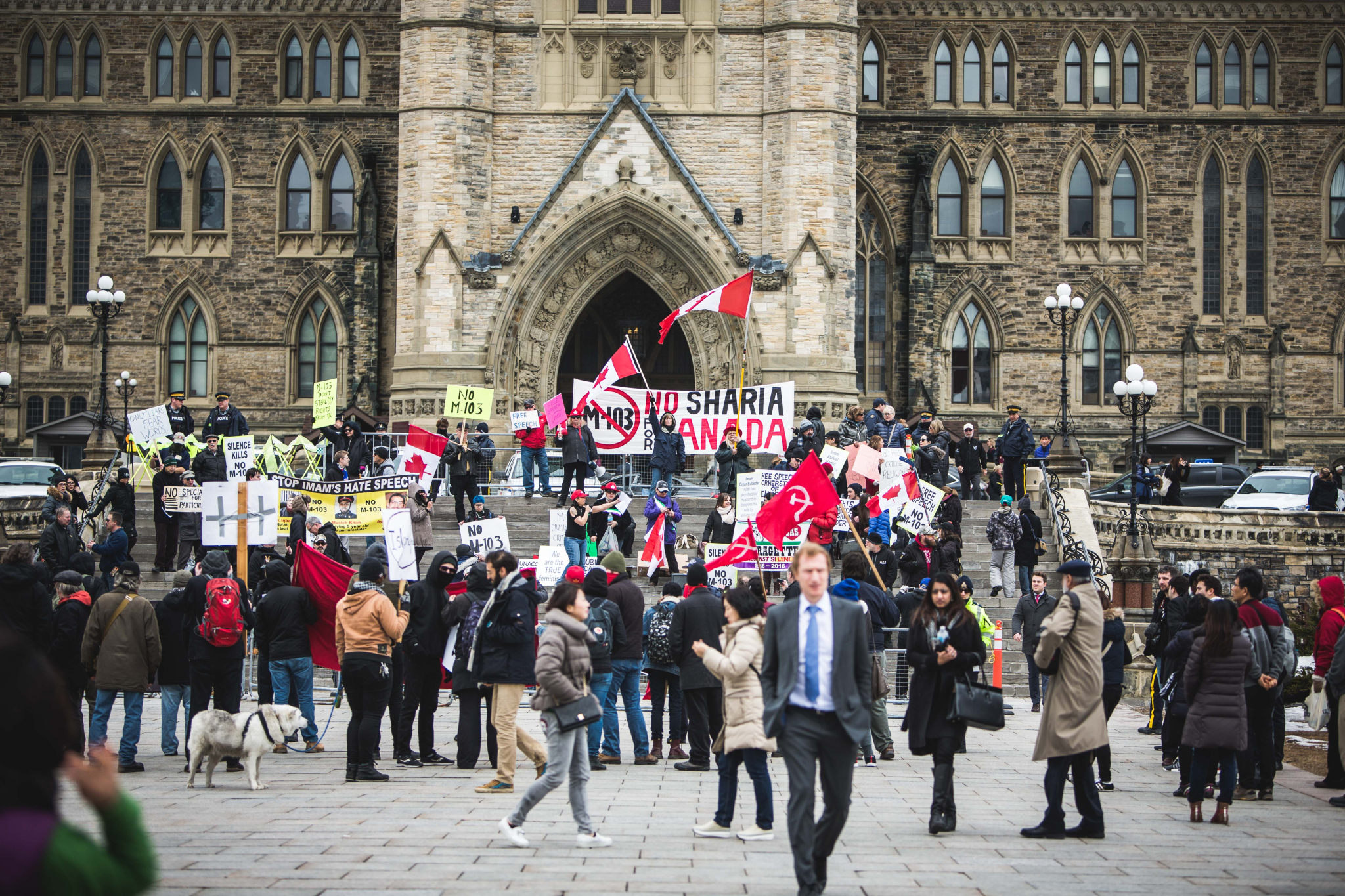 An M-103 protest is held at Parliament Hill in Ottawa in March 2017. Photo by Alex Tétreault
Previous story
Next story

On the evening of Jan. 29, 2017, Aymen Derbali, father of three, told his wife he would spend his evening worshipping at Quebec City’s Islamic Cultural Centre. This seemingly mundane decision would change his life forever.

That night, Derbali was shot by Alexandre Bissonnette seven times in an act of Islamophobic terrorism that shocked the country. After two months in an induced coma, Derbali woke up to find out he was paralyzed from the waist down and would never walk again.

Islamophobia is on the rise. But violence represents only the apex of Islamophobia, fuelled by an increasingly sophisticated discourse aimed at whipping up hatred and incitement against Muslims.

But there is one place where anti-Muslim discourse should be least expected, least tolerated and yet, is surprisingly protected: Parliament. Statements made during parliamentary proceedings are protected under the guise of parliamentary privilege.

Yet, as the alt-right makes inroads into national legislatures and mainstream political parties pander to them, parliamentary privilege is protecting individuals disseminating misinformation and hate against Muslim communities.

Parliamentary privilege provides legislators with immunity for statements made in the course of their legislative duties which may otherwise warrant criminal or civil liability. This protection is essential for the proper functioning of Parliament. It is to the legislative branch what judicial independence is to the judiciary.

Islamophobia, however, is not essential to the proper functioning of Parliament.

In May 2019, at the House of Commons standing committee on justice and human rights hearing for exploring online hate speech, St. Albert—Edmonton Conservative MP Michael Cooper told witness Faisal Khan Suri, president of the Alberta Muslim Public Affairs Council, he should be "ashamed" of linking "conservative commentators" to the online history of the Quebec City mosque shooter.

Instead of acknowledging the obvious link between Bissonnette’s online history and his anti-Muslim act of terror, Cooper tried to further discredit Suri by quoting the manifesto of New Zealand’s Christchurch killer, an act which would now earn a criminal conviction in New Zealand.

Members of Parliament were so appalled by Cooper’s reading of the manifesto into the parliamentary record that, in a rare move, the justice committee unanimously voted to expunge Cooper’s comments from the record.

This highlights the problematic nature of parliamentary privilege in the context of hate speech and defamation: where Parliament is not collectively in favour of exercising its self-regulatory power as it did with Cooper, normal citizens have no formal recourse for such malicious and irresponsible behaviour.

There are several other instances where unsubstantiated generalizations and accusations aimed at the Muslim community enjoy the publicity and immunity afforded by the parliamentary platform. Even when not as egregious as Cooper citing a mass murderer’s manifesto, these expressions still contribute to the wider climate of Islamophobia that eventually culminates in violence.

For instance, at the Senate standing committee meeting on national security and defence on Nov. 24, 2014, Tarek Fatah, once a Toronto Sun columnist, accused Hamilton lawyer Hussein Hamdani, then a member of the cross-cultural roundtable on security, of “pushing the Islamist agenda”. Islamophobic websites then relied upon Fatah’s racist allegation to launch a co-ordinated smear campaign against Hamdani, which eventually resulted in his suspension from his position on the roundtable.

Mainstream Muslim organizations have also been victims of Islamophobia protected by parliamentary privilege. At the same Senate standing committee meeting where Fatah slandered Hamdani, Syed Sohail Raza, an affiliate of the Gatestone Institute, insinuated that the Muslim Association of Canada (MAC) and the National Council of Canadian Muslims (NCCM) are linked to terrorism and play a role in the radicalization of Canadian Muslims.

Gatestone is funded to advance anti-Muslim and anti-Islam sentiment. Later, in February 2015, then-Conservative senator Daniel Lang invited Marc Lebuis, an anti-Islam blogger, where he accused MAC of being a source of radicalization. All of these Islamophobic allegations are now part of the parliamentary record, unchecked and unchallenged, courtesy of parliamentary privilege.

Additionally, at the February 2015 national security Senate hearing, Lebuis attacked a number of Muslim lawyers, including myself, with innuendo and mischaracterization of tenuous or even non-existent links and associations.

The above examples illustrate a troubling cycle: Canadian Muslims suffer the damage caused by Islamophobic rhetoric but have no recourse because parliamentary privilege protects those who espouse such toxic messages from accountability.

If one were to be charitable, it could be argued there was a time when Canadians could be excused for having a poor understanding of the aims and goals of the alt-right. We were oblivious to the weaponization of social media in the service of incitement. We did not see the vast networks of Islamophobes — often transnational — or the millions of dollars that support them.

And so, individuals connected with those networks and benefiting from the Islamophobia industry were invited to be “expert” witnesses in Parliament. After Quebec City and New Zealand, however, it has become painfully obvious we are now in a new era of Islamophobia.

While Islamophobia must be challenged online and in the courts, one place where it must be stamped out is in Parliament. Given the necessity of parliamentary privilege, this becomes a matter for Parliament itself to regulate.

As demonstrated by its willingness to strike Cooper’s comments from the record, Parliament has shown its awareness of the need to curtail Islamophobic rhetoric. However, in an era of political polarization and a global surge of white nationalist populism, we cannot simply rely upon parliamentary discretion.

One possible solution is a parliamentary ombudsperson where members of the public could lodge a complaint if they feel they are treated wrongly or defamed by an elected official, a witness in a hearing or an official employed by the civil service.

Individuals and entities showing a wanton disregard for the facts, the constitution, multiculturalism and all the other things that make Canada great should not be given a platform to sow their discontent with so much deference and so little challenge.

Cooper’s removal from the justice committee by his own party and the expungement of his heinous comments are encouraging steps, but more is needed to ensure there is no room for Islamophobia in the one place where all Canadians must be represented.

Faisal Kutty is the principal lawyer at Kutty & Associates and serves as an adjunct professor of law at Osgoode Hall Law School of York University.

I believe that parliamentary

I believe that parliamentary privilege does not extend to wilfully "Misleading" (parliamentary euphemism for lying) statements made in the Chamber. Since most of the hate speech that passes for rhetoric is derived from the white supremicist propaganda machinery and is manifestly false, any such statements can, after the fact be expunged from Hansard and/or censured by parliamentarians. These instances should be called out, on the record - without repeating their substance, by noting where they originated, and correcting the the substance by reading the truth into Hansard.

I agree but for willful

I agree but for willful misinformation I think severe penalties are needed . As in suspended from parlaiment without pay for 1 month. The "Hard I Am Always Right Group" doesn't seek any dialogue in parliament as its modus operandi is to avoid parliamentary debate.
Really they seek to create a Rogue State, and are using the goodness of parliament to further their aims.
Penalty Box!