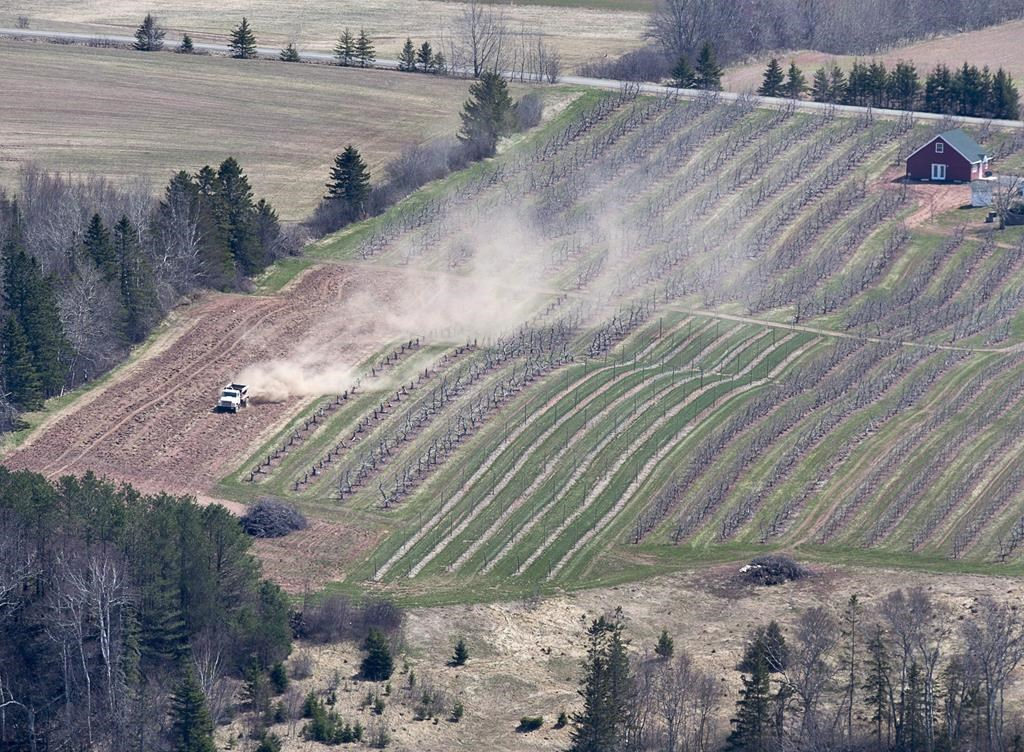 A worker fertilizes a field in Pereaux, N.S., on April 22, 2016. File photo by The Canadian Press/Andrew Vaughan
Previous story
Next story

Canada will not be spared the impact of food shortages and price shocks if global warming is not kept below 2 degrees Celsius, a new report on land use and climate change suggests.

The report, released Thursday by the United Nations Intergovernmental Panel on Climate Change, delivers stark warnings about the need for drastic changes to agricultural practices, human consumption habits and forestry management to prevent an escalation in the climate-change-related floods and forest fires that could lead to a global famine.

The Paris climate change agreement is straining to keep global warming below 2 C and as close to 1.5 C as possible, and Thursday's report is the third in 10 months to lay bare the consequences if it fails. It also comes a week after the planet experienced its hottest month ever in July, following the warmest April, May and June on record.

At warming above 1.5 C, the report predicts periodic food shocks, significant and widespread melting of permafrost and an increase in the length of wildfire seasons.

Above 2 C, there will be sustained disruptions in food supplies all around the world, widespread increases in wildfire damage and detectable losses of soil and vegetation that can be attributed to climate change.

It is projected that for every degree of global warming, the world's yield of wheat will fall six per cent, corn by 7.4 per cent, and rice and soybeans both by a little more than three per cent each. Together those four crops account for two-thirds of the calories consumed by people, and with the population growing by 80 million people each year on average, the world needs to produce more food, not less.

Werner Kurz, a senior research scientist at Natural Resources Canada and one of two Canadians among 108 scientists who co-authored the report, said he doesn't think most people understand the magnitude and pace of climate change, but he also said he believes reports like Thursday's must be used to deliver potential solutions, not just nightmares.

"As scientists we need to be careful in sort of communicating doomsday scenarios because if we create a fearful world, then inaction will be the consequence," he said. "People will be paralyzed and fearful.

"What instead this report is trying to do — and I hope is successful in achieving — is to, yes, lay out the consequences of inaction, but also then highlight the many opportunities we have for action and the co-benefits this has for livelihoods, for water."

Kurz said to slow global warming, people need to burn fewer fossil fuels and improve how land is used, so that it not only contributes fewer greenhouse emissions, but also absorbs more of them.

The report suggests agriculture, forestry and other land use activities contributed almost one-quarter of the greenhouse gas emissions produced by human activity between 2007 and 2016.

It also means diversifying the kinds of trees being planted in forests rather than focusing entirely on coniferous trees, which burn differently than deciduous trees. Using more wood to build things like houses and buildings and replanting with more diverse species can help regenerate forests, which become bigger risks for fires when they are old, he said.

But Kurz, whose job for Natural Resources Canada is to track the contributions forests make to Canada's emissions, said there is a vicious cycle in play where climate change has made more forests vulnerable to burning, but that burning is then contributing to more climate change.

Catherine Abreu, executive director of the Climate Action Network Canada, said the idea of diversifying forests is critical to improving their management.

"Canadians and Canadian governments tend to think of our forests as carbon sinks rather than sources of emissions, but we know that has been false now for a couple of years," she said.

Kurz acknowledged that the changes needed likely won't come easily for many people, but he said understanding the implications of not doing it should help.

"What we need to realize is that how we choose to live will have an impact on future climate."

The BC government just

The BC government just started a Task Force on Food Security. However, it is a total misnomer as the goal is to increase food exports and biotech, "hoping" that British Columbians will eventually benefit from increased agricultural production--the mythical trickle down effect-- . Once again, our governments fail us and ignore the effects of the climate disaster. British Columbians should demand the cancellation of the task force and replace it immediately with a real process to address the food shortages predicted. which we, in the north, have already experienced when the food trucks could not reach us due to floods and fire. We should all attempt to bring the BC government to its senses and voice our concerns in the fake consultation process at https://engage.gov.bc.ca/foodsecuritytaskforce.
It is clear that the real issue is that BC agriculture is not aimed at feeding British Columbians and this process is designed to make it worse.

Thank you for this message

Thank you for this message from the north!! Having withdrawn my financial support for the BCNDP, I am still pissed about the Site C decision! Talk about an extremely important breadbasket for B. C. that the Peace region is, most lower mainlanders ignore what is happening outside this "epicentre".
Besides getting involved in politics provincially and federally, the best I can do, among other ways, is to continue to support local food production, re-use so-called single use plastic items, etc., etc...

The productive capacity of

The productive capacity of this planet to grow food is going to take a hit. This is something North Americans of the last three generations have never experienced. No wonder we are seeing such a collective blindness to this outcome. Perhaps it is also because North Americans realize in the dark corners of their minds that when food shortages hit, it will be other people in Asia or Africa that will suffer death by famines because we North Americans will be able to outbid them to buy the reduced supplies of food. So we in North America are the biggest contributors to the problem by pumping out the most GHG's but will be the last to suffer the most serious consequences. Doesn't sound very fair to me.

Fairness and taking care of

Fairness and taking care of one's own always seem to be trampled by opportunities for "profit" and for safeguarding the interests of the already privileged. These are the conditions that spawn revolutions. Unfortunately revolutions , as their name suggests, only succeed in revolving the door that admits a new set of privileged "winners".

I am not as pessimistic about

I am not as pessimistic about "revolutionary" change. Take India for example. Under British Rule India suffered terrible famines where millions died. The last Great Famine was 1942-3. The Brits claimed that famines in India were inevitable because of overpopulation. My father was part of the "revolutionary" movement to throw the Brits out which happened in 1947. Since then there have been some droughts but not famines to the scale of when under British Rule and the population is now over three times the size. The winners of that revolution are the people of India who are now able to feed themselves (still poor but they are not starving to death by the millions) but climate change is going to take that away and we are responsible for that. https://www.theguardian.com/world/2019/jun/12/indian-villages-lie-empty-...

That includes changing human diets to be more plant-based and less meat-based, because plant-based proteins require less farmland.These are two sides to the same ugly coin: industrial agriculture is a part of the problem, whether meat-based, or plant-based.

Keep in mind there are two parts to our coming dilemma: climate change and resource depletion.

The lovely comment below about the Indian food system, under British rule, and afterward, is something we need to keep in mind. The Brits introduced large-scale agriculture to a population that had a long tradition of feeding itself, primarily through many people doing small farming.

This is coming soon to a civilization near you! We are all about to get much more intimate with our own food supply. Which is why meat, or the lack thereof, is of little consequence.

It is true that modern, industrial agriculture is more efficient at producing plant-based food than it is producing meat-based food, because it is based on "farmland" and industrial, energy-intense methods. But our four-legged friends can go into areas (like forests) that are not "farmland" and gather current sunlight and bring it back to us, in forms that we can even use without killing the animal. Our goat milk is actually an ecologically better way of obtaining protein than 1,000 acres of soy beans, which get shipped across the country to be turned into soy "milk," then shipped across the country again to be packaged in non-renewable materials, then shipped to distribution centres, then shipped to your local grocer, to which you smugly drive in your Prius or EV to pick it up.

In the future, there will be two sorts of people: 1) those who take direct control of their food supply, by growing as much of it as possible and bartering for the rest, and 2) the hungry.

Let the British experience in India be a lesson.

People could also eat less. Most of us eat way too much: our girth and the weigh scales say so.
The rub being, of course, that "real food" is more expensive up front than the harmful empty calories. Maybe poor people need a "real food subsidy" ... an ID card that would net them a reasonable discount at the checkout. Make it bigger if the food is domestically or locally grown.