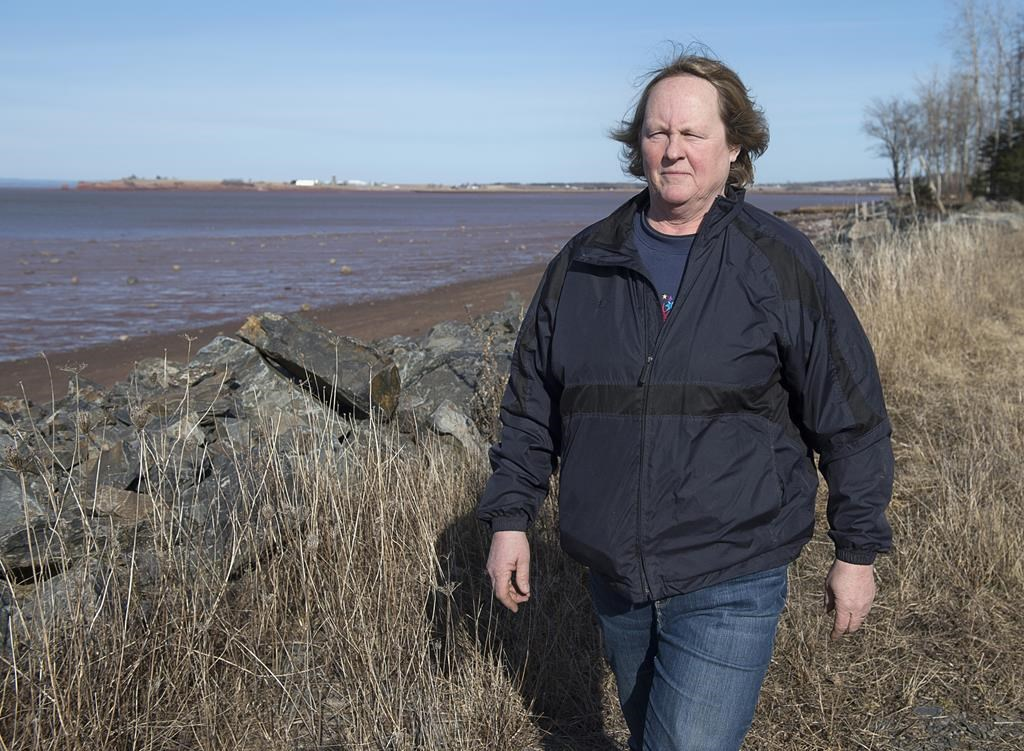 Anne Crowe, an area farmer and land owner, walks along a dike by the waters of the Bay of Fundy near Noel, N.S. on Thursday, March 28, 2019. Photo by The Canadian Press/Andrew Vaughan
Previous story
Next story

They were first created by the Acadian settlers of the 1700s, one shovel full of clay-rich soil at a time.

Over the centuries the dikes protecting the Maritime lowlands have been extended, expanded and, in the 1950s and 60s, built higher and stronger through a massive federal rehabilitation program.

But geomorphologists who study the changing shape of the coast say climate change is threatening anew the 241 kilometres of dikes that line the coasts and tidal rivers of Nova Scotia and another 100 kilometres in New Brunswick.

A recently completed draft study by a team of geographers at Saint Mary's University in Halifax indicates 70 per cent of the dikes in Nova Scotia are now vulnerable to even a one-in-50-year storm.

In that scenario, a sustained tidal surge that comes up the Bay of Fundy with low atmospheric pressure, with gusts up to 80 kilometres per hour during a high spring tide, could push water over the tops of the structures.

At risk: many homes, fertile land and roadways.

Danika van Proosdij, a geographer who leads the Saint Mary's team, says the fixes needed now are far more complex and ambitious than the renovations led by Ottawa in the last century, which rebuilt poorly maintained dikes.

"It's a different battle," she said in an interview.

"It's not just rebuilding dikes in place and shoring them up. It's actually changing how we design our dikelands and we protect our dikelands to a changing climate and forces that are greater than we've seen in the past."

A 1987 book, "Maritime Dykelands: The 350 Year Struggle," describes the outpouring of federal support by the Maritime Marsh Rehabilitation Agency in the 1950s as the "decade of salvation."

Engineers raised the structures to levels that put communities and farmers at ease, and installed much tougher aboiteaux — the culverts beneath the dikes with sluice gates that let fresh water out and close to prevent seas from entering during high tides.

During a recent walk along the Noel shore, local resident Eleanor Anthony recalled how in 1959 — when she was just 10 years old — she watched the hydraulic machinery build the current barrier against the Minas Basin.

Behind the current dike, the faint outline of the much lower Acadian dikes remains visible.

A bit further along, neighbour Anne Crowe's recently restored lowland fields flourish and grow enough hay to feed a quarter of her 100 head of cattle.

But the tides are inching higher as the Bay of Fundy rises — almost 40 centimetres in just 70 years, with international climate change scenarios projecting an acceleration in the decade to come.

Boulder-sized ice blocks that glisten on the chocolate brown beach appear benign at low tide, but Anthony and Crowe have watched them play their role in erosion when Fundy's tides rush in.

The shining ice rides up to the crest of the dike's armour rock, fuses into the stone, and drags it piece by piece into the sea.

The two women also anxiously point to a massive, five-metre bite being chewed out of a steep, sandy shoreline the dike ties into, with each storm bringing the waters a step closer to their lands.

"The field at the end (of the dike) is washing away, so we need some kind of solution for this end of the structure," said Anthony, standing a few hundred metres from a home she fears would be flooded if the dike's rearguard gives way.

However, van Proosdij says the problem isn't simply that seas are closer to the top of the dike, but the foreshore — the beach in front of the women — is being eroded by the sea.

That means that simply raising a dike like Noel's isn't the only answer, as it's the foreshore that ultimately protects the dike from being battered by the mighty current.

"Noel is a high vulnerability (dike), the rate of erosion for that area is quite high," she says.

A team of experts will need to identify portions of the Noel dike that could be moved back or altered, she said, to buy the community more time and "provide a greater ability to save their lands for the future."

However, for Crowe, the possibility of losing land is a worrying option after spending thousands of dollars working the lowlands to create feed for her dairy cattle.

"We're talking about fossil fuels and let's not burn too much — if I have to bring feed in from Quebec or Ontario, that's going to take a lot more fuel than me just bringing it in from Ontario," she said.

In the 1970s, Ottawa left the dikes to provincial departments to maintain the structures and fund upgrades.

But it also notes the vulnerabilities.

"Area stable, however erosion at graveyard is at risk of washing around the dike," an inspector says about a dike further down the shore from the Burncoat dike.

The notation for the Kennetcook dike says its elevation is low and "on some high tides water over flow the dike."

Kevin Bekkers, the director of land protection in the provincial Agriculture Department, says his department has a growing budget for capital improvements as climate change concerns grow.

The capital plan introduced in March projects a $50-million, nine-year plan for dikeland improvements will reduce flood risk, with an expectation about half the money will come from Ottawa, the department says in an email.

These improvements would "strengthen the resilience of dikes" in the Annapolis River, the Southern Bight, the Cumberland Basin and along Cobequid Bay, the email says.

Whether this kind of provincial response, with federal help, will be enough to produce a freshly reworked dike system capable of dealing with climate change remains to be seen.

Van Proosdij says a variety of approaches may be necessary: A retreat of some dikes, the use of less permeable materials, careful tie-ins with higher lands.

Whether Crowe and Anthony will ultimately be safe from flooding remains unclear.

"It's a real worry," says Crowe, gesturing to her family marshland.

"We have to reinforce these things and keep them going. If it works in Holland, it should work here."

By Mia Rabson | News, Politics | November 9th 2017
Reports from the Race to a Safer World