Race to save sockeye salmon in northern B.C. after landslide threatens First Nations and commercial harvest 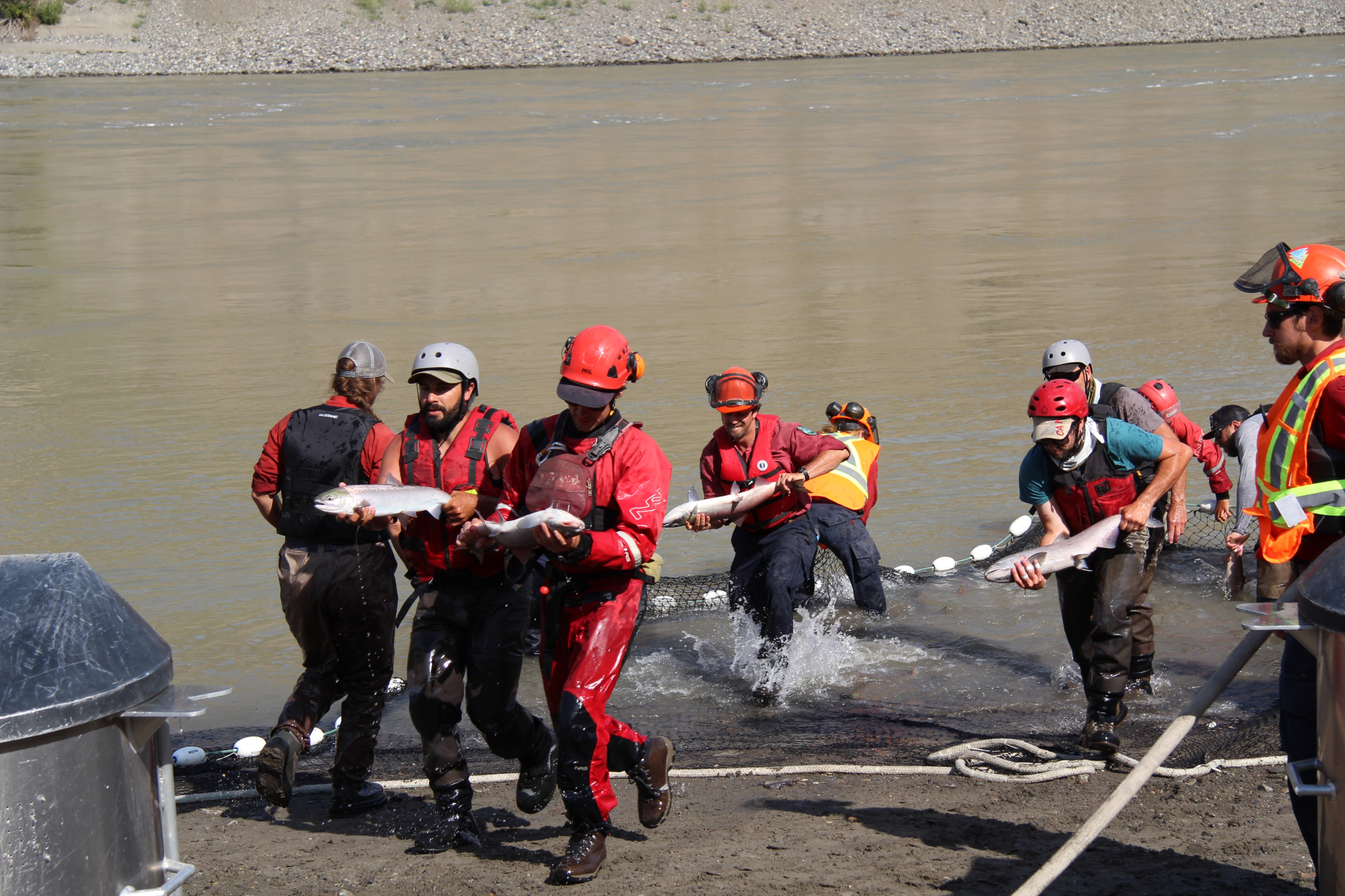 Federal and provincial officials are working non-stop with local First Nations near Big Bar, north of Lillooet, B.C. to save sockeye salmon after a major landslide in the Fraser Canyon.

The landslide is in a remote area and happened sometime last fall, but it wasn’t discovered until mid-June via satellite imagery.

A high-speed waterfall caused by the rockslide is making it difficult for Chinook and sockeye salmon to reach spawning grounds.

According to the Unified Command Incident Management (UCIM) team formed by federal, provincial and First Nations officials, in-water acoustic monitoring has shown that just a small portion of the fish are currently able to get past this barrier.

Approximately 90,000 salmon have been recorded in the river below the barrier and up to another two million are expected to reach the slide site over the next few weeks. This could severely impact current and future fish populations in the area.

Federal Minister of Fisheries and Oceans and the Canadian Coast Guard Jonathan Wilkinson visited the site in early July.

“There is a clear urgency with the response, and we are certainly operating under a very strict timeline,” he said in a press conference held in Lillooet on Tuesday.

On Wednesday afternoon the BC Assembly of First Nations asked Canada to issue a closure to all marine and recreational Fraser River salmon fishing.

“Salmon are sacred to all First Nations in B.C.,” said Regional Chief Terry Teegee. “It is one of the most important resources for First Nations. First Nations are demanding that all recreational and commercial salmon fishing be immediately closed until the landslide can be cleared to give the salmon a chance to return to their spawning grounds.”

He said he believes the ministry is mismanaging the crisis and urged Wilkinson and Prime Minister Justin Trudeau to recognize the “emergency situation we are all in.”

“It is imperative that we do whatever we can to enable as many fish as possible to pass through the slide to secure the sustainability of these runs and obviously the communities who rely on the success of these stocks,” said Wilkinson.

Fraser River Chinook and sockeye runs are already of conservation concern to governments. The runs are critical for First Nations communities who rely on them for sustenance.

Tl’azt’en Nation Grand Chief Ed John calls it an environmental disaster. The salmon spawn in about 56 streams in his home territory in northern B.C. He said the sockeye salmon have been declining for several years as it is.

“My communities, where I come from, the north, have decided absolutely no one will be allowed to do any fisheries whatsoever,” he said.

“And I understand it’s the same position that First Nations have taken up and down the river. And so I think it’s important, whether you’re fishing for Chinook or whether fishing for other species of salmon, to ensure that every single effort that’s possible is undertaken by commercial fishermen, sports fishermen and for First Nations food, social and ceremonial purposes (to preserve).”

He went on to point out that conservation must be a top priority and if there are fish that are able to be caught that First Nations be given the first opportunity.

Gordon Sterritt, a member of the Gitxsan Nation and acting executive director for the Upper Fraser Fisheries Conservation Alliance, said First Nations have taken responsibility to protect the fish.

“I’ve been involved in the incident since the onset and it has been an emotional event for those directly involved operationally, as well as for those impacted by the slide,” he said at the press conference.

“First Nations up and down the Fraser and marine areas, including U.S. tribes, are very concerned about what this means for this year’s returns and what it means for future returns.”

The UCIM team is unprecedented in the scope of the project, he said, in that First Nations have been involved with the incident from on the ground support, up to the management level.

“We have opened the door to First Nations leadership to come in onsite and see what is happening with this government-to-government model and at the site itself. We’re trying to be as transparent as possible with this process so that everyone impacted can be comfortable with how we’re approaching this incident,” he said.

Over a dozen engineers are working to create a natural passageway via rock manipulation, and a team of 40 is working to move salmon caught by a fish wheel into secure buckets and then to transport them, by helicopter, up the Fraser over the blockage. Approximately 5,000 fish have been moved so far. Fishing restrictions have also been implemented in the area.

The UCIM team is also looking into installing a fish ladder to make it physically easier for the fish to get over the barrier by lessening the incline. The ladder is ready to be put into place, if required, following the rock-manipulation work.

“All I can say in summary is Mother Nature is a very powerful force,” said Doug Donaldson, B.C.'s minister for Forests, Lands, Natural Resource Operations and Rural Development.

“We’re continuing to pursue all viable options and solutions to ensure safe passage for the salmon. A fish wheel has been assembled onsite to help capture fish for transport past the slide. It’ll take time to be fully operational as personnel must follow the specific safety plan for the equipment so that it works as intended. And I can’t stress enough how safety is so important. This is a very dynamic site and a very remote location.”

The salmon that travel to the Stuart River near the community have already been under stress for decades, he said. The Stuart River is also where the Coastal Gas Link LNG pipeline was planning to construct the pipeline. But McKinnon said the nation asked CGL to look for alternative routes given the delicate situation with the salmon.

“They’re (CGL) looking at other options,” he said. “Our members need their salmon. As stewards of the land, we are responsible to help preserve and protect it as well.”

To help offset the loss of this year's salmon harvest the Nak’azdli council has put in a request with the province of B.C. to reduce the number of hunting permits in the area so that members can have more options available to hunt.

The landslide is also affecting recreational and commercial fisheries and could have major implications for larger marine mammals, such as killer whales.

“This is obviously a very challenging situation, one that could have long-term consequences for the communities on the river and far beyond,” said Wilkinson.

Water levels are expected to rise next week due to expected rain in northern B.C. and extreme heat onsite will make efforts to assist the salmon more challenging, cited the UCIM team.

However, they will continue with the fish capture and transfer program and other mitigation efforts.

For regular updates on the slide head to the Big Bar Landslide Incident page under Public Safety and Emergency Services on gov.bc.ca.

By The Canadian Press | News, Politics | August 1st 2019
State Of The Animal

Wonder what the details of

Wonder what the details of rock manipulation means? Curious for the facts, and how a fish ladder will be installed.
Interesting this slide wasn't noticed for at least 6 months.
Best of luck to everyone there.

Wonder what the details of

Wonder what the details of rock manipulation means? Curious for the facts, and how a fish ladder will be installed.
Interesting this slide wasn't noticed for at least 6 months.
Best of luck to everyone there.

What was the cause of the

What was the cause of the landslide. Over-forestization is usually the primary cause of landslides or rockslides. Logging is recognized worldwide as a cause of landslides. Except for earthquakes or perhaps explosions from dynamite. And I haven't heard anything about earthquakes. So human caused landside 100%. Could be earthquake induced fracking! Headline: non-indigenous humans kill sockeye salmon. Genocide!

Thanks for this coverage N. O

Thanks for this coverage N. O. But please note: Lilloet is not "northern BC".