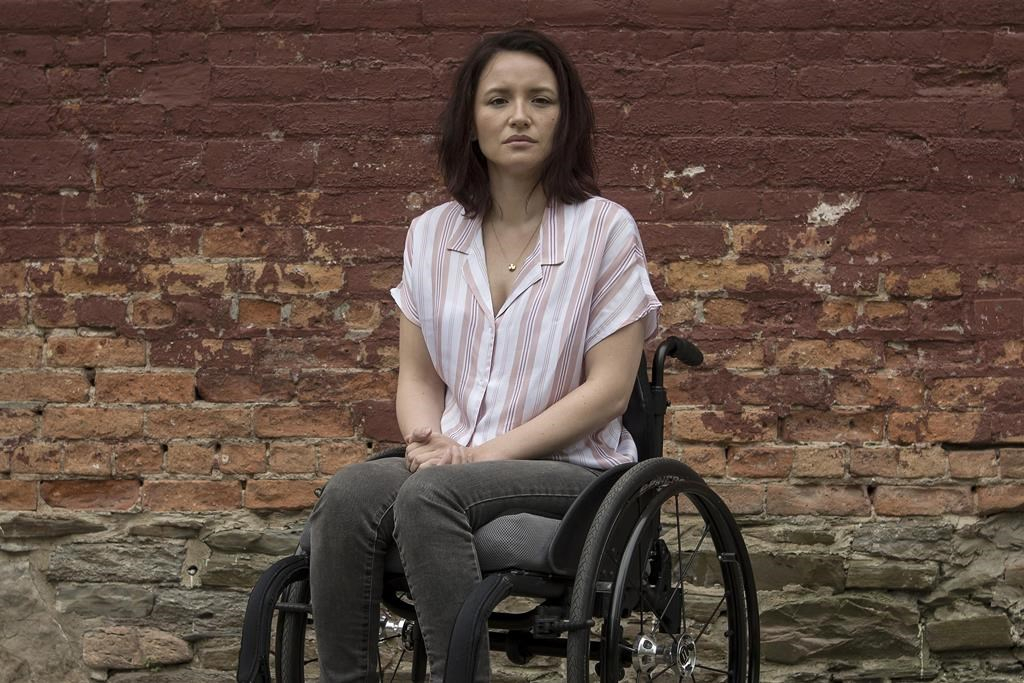 Danielle Kane, a shooting survivor from the Danforth attack, poses for a photograph at Liberty Village Park in Toronto on Friday, July 12, 2019. File photo by The Canadian Press/Tijana Martin
Previous story
Next story

As the RCMP remains tight-lipped about why two young men may have killed three people in northern British Columbia, one of the survivors in Toronto's Danforth shooting says she's been following the story closely.

Danielle Kane said the Toronto police department's decision to release a detailed report on its investigation provided her with clarity about what happened the night she was paralyzed from the waist down and insight into the man who shot her.

"It helped me process the whole thing and it also allowed the public to kind of figure out, well, what are the things that kind of lead up to this sort of thing happening? What are the factors?" she said in an interview.

"I think that's important for the public to know, instead of just wild speculation, because that's what's happening now."

Kane was one of 13 people injured when Faisal Hussain opened fire in Toronto's Greektown neighbourhood then killed himself. Julianna Kozis, 10, and Reese Fallon, 18, were killed in the shooting on July 22, 2018.

Toronto police Chief Mark Saunders said in June that police took the "unprecedented step" of releasing their findings in the year-long probe out of compassion for the families and in recognition of the widespread impact the attack had on the community.

The 23-page report did not identify a specific motive, but it said Hussain had a fascination with death and violence. He also had a long history of mental health issues and repeatedly harmed himself, the report said.

On Wednesday, the RCMP announced they are confident that two bodies found in the dense brush outside of Gillam, Man., are those of Bryer Schmegelsky and Kam McLeod, suspected of killing a young tourist couple and a botanist in northern British Columbia last month.

The finding marks the end of a manhunt for the Vancouver Island men, but questions remain unanswered about what exactly happened, including their motivation.

RCMP Assistant Commissioner Kevin Hackett told a news conference Wednesday that determining a motive will be "extremely difficult" if the identities are confirmed through autopsies because investigators can't interview Schmegelsky or McLeod.

He did not commit to provide details of the ongoing investigation, saying: "There may be an opportunity for that in the future but I'm not in a position to speak about that today."

Legal experts argue that the Mounties should share more about what they know, while balancing the privacy rights of those who died and their families.

"They may need to be cautious and careful about how they put things, but I would hope to hear more from police about motivation because ultimately we want to prevent future incidents of this kind," said Neil Boyd, a criminologist at Simon Fraser University in Burnaby, B.C.

Boyd also defended the Mounties handling of the case, arguing that releasing too many details while the fugitives were still at large could have compromised the investigation.

Some details may also be shared with the affected families alone, if they are needlessly gruesome or involve personal information, he said.

Toby Mendel, executive director at the Centre for Law and Democracy based in Halifax, said questions about why the RCMP didn't name McLeod and Schmegelsky as suspects earlier adds weight to the argument that they should release information about how the investigation was conducted.

The Mounties announced McLeod and Schmegelsky as missing persons on July 19 and as suspects on July 23. In the meantime, the pair interacted with a man in Cold Lake, Alta., on July 21, and band constables with the Tataskweyak Cree Nation in northern Manitoba on July 22. They were unaware of who the men were.

"Whenever there's an allegation about wrongdoing or inappropriate behaviour on the part of any official, the public interest in accessing information increases significantly," Mendel said. "That means they correspondingly need a weightier argument not to release the information."

Investigators need to have the freedom to make decisions in the heat of the moment, including what information to release. But that doesn't give them automatic protection from a review of the decision later, he said.

The story's notoriety means it affected many people across the country, some of whom have become fearful or felt their safety was threatened.

"A British judge once famously said the public interest is not what the public is interested in. So the mere curiosity or sensational curiosity wouldn't drive that. But I think in a case like this you have to look at what's behind the curiosity," he said.

Hackett defended how the RCMP released information on McLeod and Schmegelsky as their status changed from missing persons to suspects.

"This was a dynamic and constantly evolving investigation," he said. "And with the help of the media we were able to get information very quickly into the hands of the public to enhance public safety. I don't know if we could have gone much quicker than we did."

In deciding which details to release publicly, lawyer Lorne Randa said the RCMP will consider the fact that an individual's privacy rights don't disappear at death, and their family members also have a right to privacy.

The Privacy Act does include a provision for police to disclose personal information where it would be in the public interest to do so. However, the definition of what's in the public interest is discretionary, said Randa, who is based in Edmonton and chairs the Canadian Bar Association's committee on privacy and access.

"There's nothing that would obligate the RCMP to disclose information of that nature," Randa said.

Peter German, a former assistant commissioner who retired from the RCMP in 2012, said he believes the Mounties will provide as much information as possible without violating privacy rights.

"The option is to hold an inquest and I don't think that's necessarily in the cards in this case," he said. "There will be a thorough investigation and the RCMP should be able to inform the families of all the details and hopefully the public to a certain degree, so it does bring closure."

— With files from Liam Casey in Toronto.

'I'm choosing not to be a victim,' Danforth shooting survivor says