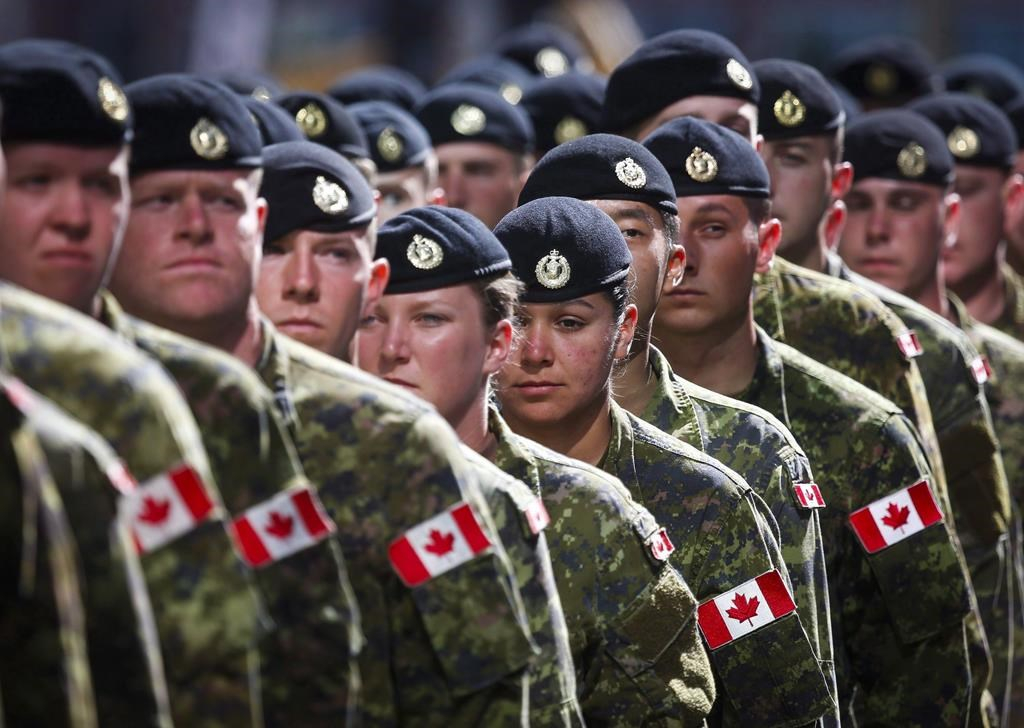 Members of the Canadian Armed Forces march during the Calgary Stampede parade in Calgary, on Friday, July 8, 2016. File photo by the Canadian Press/Jeff McIntosh
Previous story

Canadian military members are being warned against getting certain tattoos, including those that could be deemed discriminatory or sexually explicit, as the armed forces tries to crack down on misconduct and intolerance in the ranks.

The warning is contained in a new order issued Monday by Gen. Jonathan Vance, Canada's chief of the defence staff, that provides the most specific guidance yet around what tattoos are considered acceptable — and which ones could result in disciplinary measures.

The directive happens to follow a recent incident in Halifax in which a sailor was criticized for sporting a tattoo featuring the word "infidel'" in the shape of a rifle. Work on the new rules predated that controversy, said Canadian Armed Forces spokeswoman 2nd Lt. Stephany Duval.

Following an investigation, the Royal Canadian Navy said there was no ill intent on the sailor's part but that he had nonetheless agreed to change his tattoo.

The military's guidelines previously banned tattoos that were "visible either in military uniform or in civilian clothing that could be deemed to be offensive (e.g., pornographic, blasphemous, racist or containing vulgar language or design) or otherwise reflect discredit on the CAF.''

The new rules, which apply whether a tattoo is visible or not, lay out in much more detail what images are forbidden. In his directive, Vance said the aim was to maintain the military's positive reputation, "which prioritizes the promotion of diversity, respect and inclusion."

Tattoos connected to criminal activities such as criminal gangs are now unacceptable as are those that promote or express discrimination as defined by the Canadian Human Rights Act, including hatred, violence, discrimination or harassment.

Military personnel are also forbidden from sporting ink that they know — "or ought to know" — is racist, sexist, misogynistic, xenophobic, homophobic, discriminatory against the disabled or sexually explicit.

While Duval said the new guidelines were intended to provide more clarity for service members, some have nonetheless expressed confusion and concern on social media over whether they will be forced to change their tattoos.

Much of the discussion centred around whether all tattoos of women such as pictures of pin-up girls, which were often painted on military vehicles during the Second World War and remain popular with many soldiers today, are now completely banned.

Service members who are unsure whether their tattoos pass muster can check with a commanding officer, Duval said. If a design is deemed over the line, they will be required to remove or alter the images — at their own cost — or risk being punished.

The new guidelines comes as senior commanders fight sexual misconduct in the ranks, an effort that has generated mixed results over the past four years — many soldiers, sailors and air force members have continued to report such incidents.

They also follow concerns about some military personnel associating with motorcycle gangs and white-supremacist groups, with military intelligence officials saying in a report last year that 30 were part of a hate group or had made statements that were discriminatory or racist.

The report, obtained by The Canadian Press through the Access to Information Act, also said current and former military members "find that their skills are valued, giving structure to these groups and allowing them to gain positions of leadership."

"I'd say that's what it's really about: a ready way to keep extremists and serious gang members out of the (Canadian Armed Forces)," said Royal Military College professor Christian Leuprecht of the new rules on tattoos.

Defence analyst David Perry of the Canadian Global Affairs Institute said the new rules could nonetheless be difficult to police, given the personal nature of tattoos and their meanings, which aren't always immediately obvious.