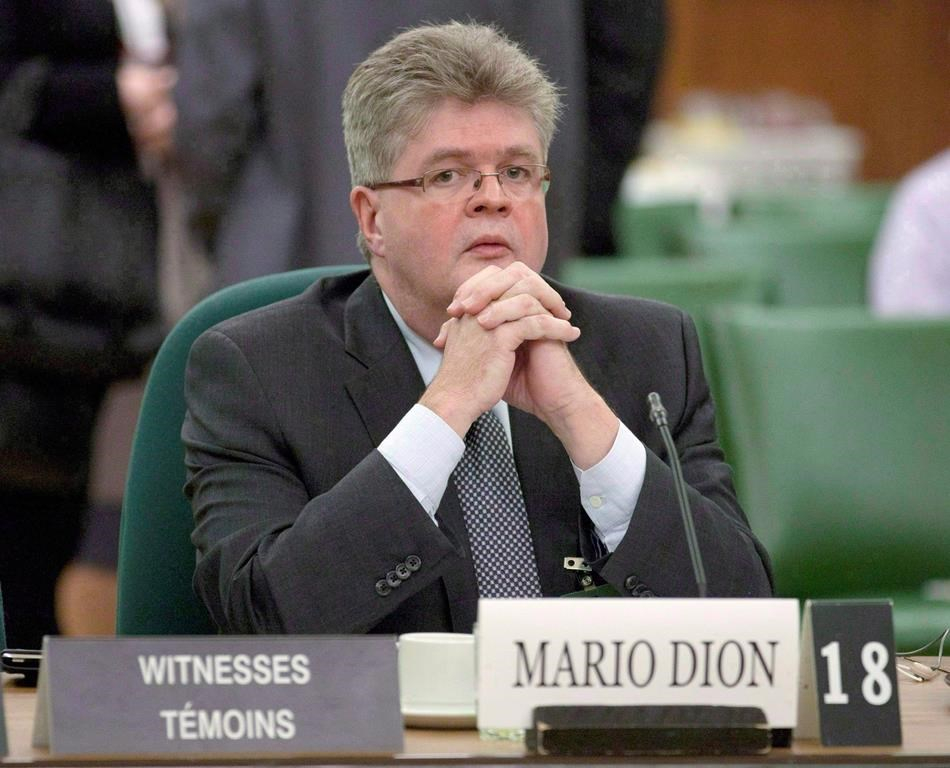 Mario Dion waits to appear before the Commons estimates committee on Parliament Hill in Ottawa, on Tuesday December 13, 2011. File photo by The Canadian Press/Adrian Wyld
Previous story
Next story

Conservative Leader Andrew Scheer says there's now more than enough evidence of misconduct by Prime Minister Justin Trudeau in the SNC-Lavalin affair to warrant an investigation by the RCMP.

Scheer was responding to a new report by ethics commissioner Mario Dion, who says Trudeau violated the Conflict of Interest Act by improperly pressuring former attorney general Jody Wilson-Raybould to halt the criminal prosecution of the Montreal engineering giant.

The Conservative leader calls Trudeau's conduct "unforgivable" and says Canadians can no longer believe anything the prime minister says, and that they will hold him responsible when they go to the polls Oct. 21.

Dion concluded Trudeau's attempts to influence Wilson-Raybould contravened section 9 of the act, which prohibits public office holders from using their position to try to influence a decision that would improperly further the private interests of a third party.

He says SNC-Lavalin's financial interests would have been furthered had the decision by the director of public prosecutions — who refused to offer the Montreal engineering giant a remediation agreement in order to avoid a criminal prosecution on fraud charges related to contracts in Libya — been reversed.

The report also says Trudeau improperly pushed Wilson-Raybould to consider partisan political interests in the matter, contrary to constitutional principles on prosecutorial independence and the rule of law.

"He may never face a court of law, but he will have to face the Canadian people over the next few weeks," Scheer told a news conference in Regina. "We just can't believe anything this guy says anymore."

Trudeau subsequently kicked both women out of the Liberal caucus; they are running for re-election as independent candidates. Both said Wednesday they were still reading the report and would not comment until they've read it in its entirety.

Trudeau's political rivals, all of whom are jockeying for position with the start of an election campaign now just weeks away, wasted little time in seizing on what appeared to be a golden opportunity.

"Justin Trudeau said he would be accountable and ethical. Instead he used the power of his office to reward his supporters and punish his critics," Scheer wrote in a tweet that hit his Twitter feed within an hour of the report's release.

"He is now the only PM in history to be found guilty of breaking federal ethics law not once, but twice."

"The prime minister's fundamental job to Canadians is to assure them that the rule of law will be respected," Angus said. "I can't think of a precedent of this happening before. The prime minister has been found guilty of a very, very serious interference in the legal processes of Canada."

Dion also made a point of noting that due to the confidentiality obligations that govern cabinet documents and discussions — obligations that were partially waived by the Prime Minister's Office at the height of the scandal, to allow Wilson-Raybould to testify — he wasn't able to access all the necessary materials.

"The decision made by the Privy Council Office to deny our office access to a full range of cabinet confidences meant nine witnesses were constrained in providing our office with the full body of evidence potentially relevant to the examination," he wrote.

"I believe that decisions relating to my access to such information should be made transparently and democratically by Parliament, not by the very same public office holders who are subject to the regime I administer."

The governing party has a

The governing party has a corrupt cabinet, in point of fact the entire Liberal caucus can be justifiably accused to the same failure. The entire caucus winks at crystal clear evidence of multiple attempts by numerous individuals including the PM to interfere in the prosecutorial process, all to appease a corporate donor and stand fast behind a leader who has interfered with the crucial autonomy of the office of attorney general.

Canadians owe a huge thanks

Canadians owe a huge thanks to the ethics commissioner for doing his job, respecting his investigation into the SNC Lavalin affair, so courageously and vigorously. He has done a vital service in protecting the rigour and integrity of Canadian democratic institutions/practices.