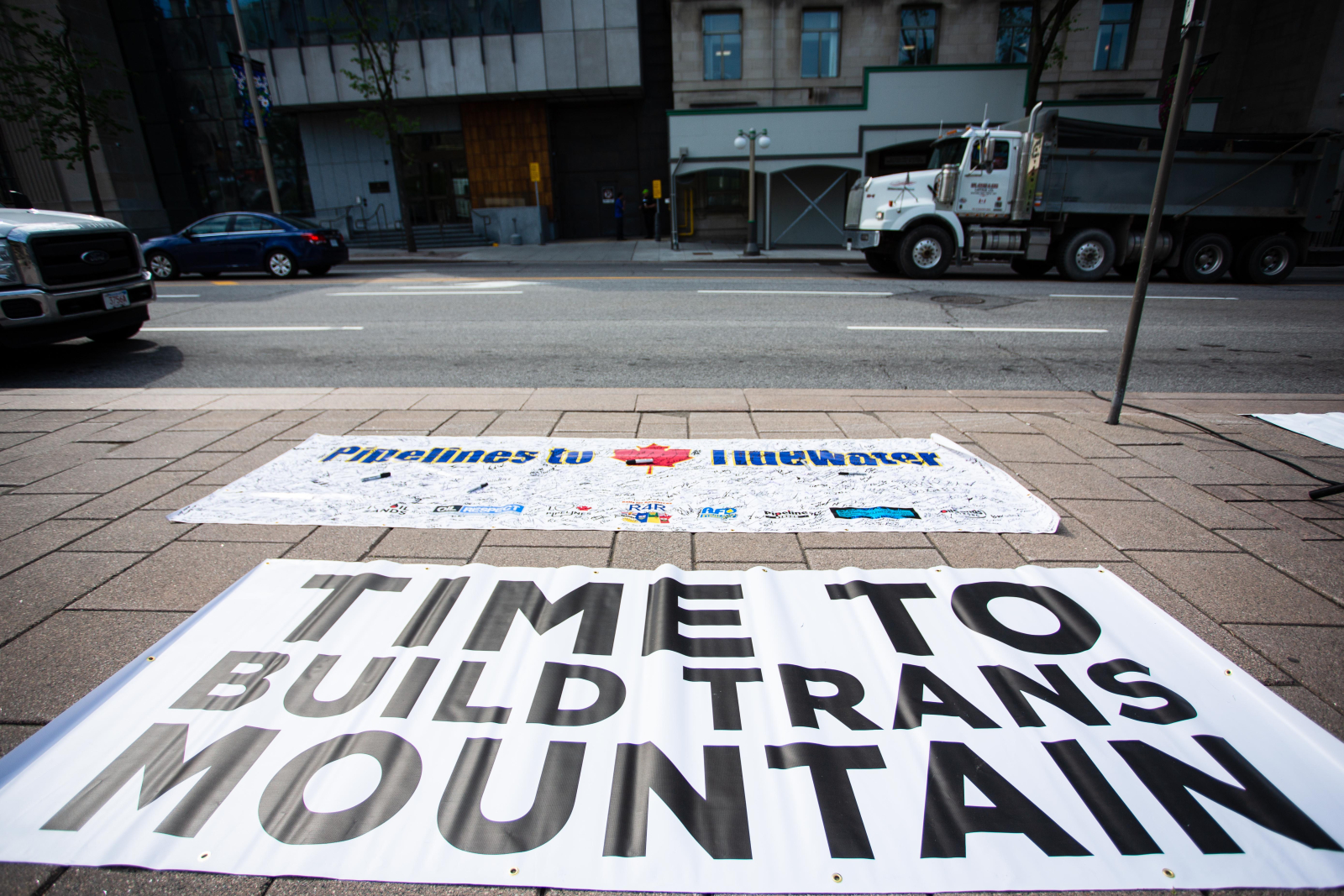 Rally 4 Resources and Canada Action in Ottawa, as well as Canada's Energy Citizens, organized a rally on May 23, 2018, to support the Trans Mountain expansion. Photo by Alex Tétreault
Previous story

Construction on the controversial Trans Mountain pipeline expansion project will resume within the next month.

In a statement Wednesday, Trans Mountain Corp. said it had asked its contractors to begin hiring staff, gathering building materials and developing detailed construction plans for the project, which the federal government approved for the second time in June. If completed, the project would twin an existing pipeline stretching from the Alberta oilpatch to a marine terminal in Burnaby, B.C., tripling its capacity.

“With the first wave of regulatory approvals complete, we are confident that we have a path forward by which the expansion project construction can commence,” said Ian Anderson, president and CEO of Trans Mountain.

The statement also said it expects 4,200 workers to be hired in communities along the project’s route in the coming months. Though the project hasn’t yet received all the approvals necessary to go forward ⁠— and must abide by more than 150 conditions from the federal government as it proceeds ⁠— Trans Mountain said it expected to receive all necessary green lights in short order, and have the expansion up and running by mid-2022.

Supporters of the pipeline project have said it would boost Alberta’s struggling oilpatch. But environmentalists and some First Nations have opposed the expansion, citing potential harm to wildlife and to Canada’s international climate commitments.

Khelsilem, spokesperson and councillor for Squamish Nation, has called the government's approval of the pipeline an "attack" on the rights of Indigenous Peoples who say they were not adequately consulted.

Dyna Tuytel, a staff lawyer at the environmental law non-profit Ecojustice, said it’s “nonsensical and illogical to say we can both expand fossil fuel infrastructure and protect the climate and protect the southern resident killer whales,” one of the species that could be affected by the pipeline.

“I would call (the beginning of construction) inappropriate or premature, given that several First Nations, environmental groups and the municipality of Vancouver are all making arguments the approval is unlawful,” Tuytel said.

In June, the Tsleil-Waututh and Squamish nations, whose land the pipeline expansion would pass through, both said they planned to appeal the federal government’s approval of the project. (Not all First Nations oppose the pipeline expansion — an Indigenous coalition called Project Reconciliation has submitted a proposal to buy it.)

Ecojustice is also representing the Raincoast Conservation Foundation and the Living Oceans Society in contesting the approval.

Contractors have 30 days to mobilize, Trans Mountain said. Construction will begin “soon” around Edmonton, and between Edmonton and Edson, Alta., about 100 kilometres to the west. There will also be an “immediate return to work” at the company’s tank farm and marine terminal in Burnaby, Trans Mountain said.

Start dates at other sites along the pipeline route will depend on the remaining regulatory approvals, the company added.

“There is still not reason to celebrate”

Canada first approved the project in 2016. But construction was paused in 2018 after a judge overturned that decision, finding that the federal government hadn’t adequately consulted First Nations.

In June, after the project was approved for a second time, Prime Minister Justin Trudeau pledged to reinvest “every dollar” from it into Canada’s clean-energy transition. Last year, Trudeau’s government purchased the project for $4.5 billion.

In a statement Wednesday, Alberta Premier Jason Kenney called the beginning of construction on the expansion a “step forward,” but said “there is still not reason to celebrate.”

“The series of delays and the existing uncertainty around this vital project continue to present serious challenges,” the statement said.

“As Trans Mountain begins to prepare for its construction restart, the federal and local authorities must ensure the rule of law is enforced and that construction is not illegally blocked.”

Many Canadian oil and gas producers have struggled since global oil prices plummeted in late 2014. Industry has long pushed for new pipelines, saying it would allow companies to export oil for a cheaper price and avoid riskier methods, like sending oil by rail.

Earlier this year, Alberta forced companies to cut production, hoping to support Canadian oil prices and avoid a crash as pipeline capacity remains hampered by legal challenges. On Tuesday, the Alberta government extended the output cuts, which were supposed to end in December, until late 2020.

On Tuesday, the Conference Board of Canada released its Summer Outlook report finding that Alberta's economy will shrink by 0.8 per cent this year, in large part due to uncertainty regarding pipelines.

The province "will face a mild recession in 2019, but some areas are showing signs of improvement after a rough start to the year," the report said.

The struggling energy industry has driven up unemployment rates in Alberta. But the five largest Canadian oil companies ⁠— Suncor Energy, Canadian Natural Resources Limited, Cenovus, Imperial Oil and Husky ⁠— continue to generate healthy profits, according to a 2018 report by the Parkland Institute, a think tank at the University of Alberta, in partnership with the Corporate Mapping Project at the University of Victoria and the Canadian Centre for Policy Alternatives.

Meanwhile, costs have already escalated for the Trans Mountain expansion, which was originally budgeted at $4.1 billion in 2016. Documents in August 2018 showed the cost as high as $9.3 billion.

In a press conference outside Edmonton on Wednesday, federal Natural Resources Minister Amarjeet Sohi said the project is “in the national interest.”

“We're very happy that people will be actually in the field, digging the ground and installing the pipe,” he said.

Tuytel, from Ecojustice, said the organization expects to know in the fall whether the Federal Court of Appeals will hear their case.

Editor's Note: This story has been updated as of 11:01 a.m. on Aug. 22, 2019 to include comments from Khelsilem, spokesperson for Squamish Nation.

“ There will also be an

“ There will also be an “immediate return to work” at the company’s tank farm and marine terminal in Burnaby, Trans Mountain said.“. This is nonsense. Work on both these terminals has been ongoing and never stopped.

If you go to the Marine Terminal you will see workers transported to and from it by bus. The last time I was there, three buses came.

At a press conference this summer at the Burnaby Mountain storage tanks there were some large noisy machines working where the portal to the tunnel is planned.

Let's be clear that it was

Let's be clear that it was never "legal" to begin building the pipeline, until all the NEB conditions had been met. They never were. The pipeline was purchased with all the conditions outstanding. Last I heard, there were still over 150 outstanding, that had been reaffirmed by the NEB, and it seems to me they might have added a few number more.
A document from government, which apparently preceded its most recent order-in-council, seemed to give short shrift to the matter of aboriginal title, claiming that they could rely upon "substitute" lands available, and that if they didn't see that, say, hunting rights were *severely* impacted, then they could go ahead. I don't think that's what title means. I wonder how the Canadian government would take it if the First Nations people decided that the Parliament Buildings had to go, because the First Nations were taking over the property for their own purposes.
I fail to understand how the government, as owner of the line, can override the ruling of the NEB, which has been acting within its mandate. Can it be that Mr. Trudeau just doesn't understand what the term "Conflict of Interest" actually *means*?
At one time, it was fairly easy at the NEB website to find a list of all the conditions made, the steps taken, and their current status. I've been looking again ... and currently have more tabs open in my browser than is reasonable, but have yet to find the right page.