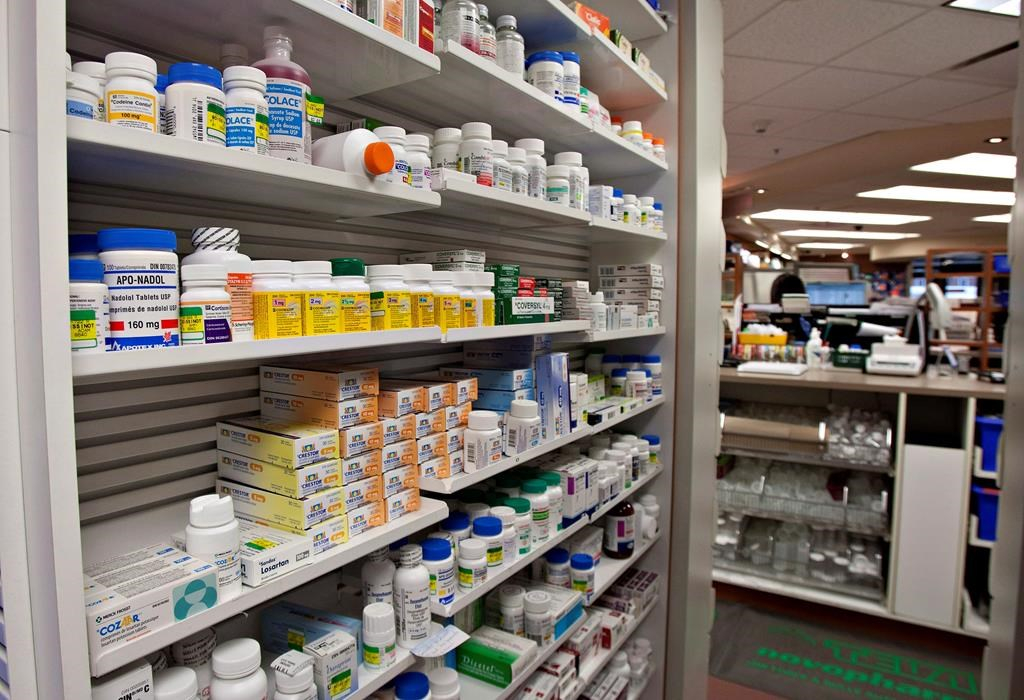 Shelves of medication are seen at a pharmacy in Quebec City, on Thursday, March 8, 2012. File photo by The Canadian Press/Jacques Boissinot
Previous story
Next story

Some Canadian patients and groups that advocate on their behalf are sounding the alarm about the federal government's recent changes to the way it regulates the cost of patented medicines.

Toronto lawyer and longtime Liberal supporter Chris MacLeod, who lives with cystic fibrosis, said Thursday that it pains him to speak out against the government but he fears lives could be on the line as a result of what he calls a "wholly irresponsible" approach.

Health Canada recently finalized its long-awaited changes to the process of establishing drug prices, which include providing the Patented Medicines Prices Review Board with the market price of medicines rather than an inflated list price.

The department says the board — first created 30 years ago to ensure companies don't use monopolies to charge excessive costs — can now consider whether the drug price actually reflects the value it has for patients.

Earlier this month, board chair Dr. Mitchell Levine also said the body now has the tools and information it needs to meaningfully protect Canadian consumers from excessive prices.

Health Minister Ginette Petitpas Taylor issued a similar statement Thursday, noting the objective of the changes, which have taken three years to implement, was to ultimately lower prices while making sure Canadians get access to the medicines they need.

The government has billed the changes as an effort to establish the groundwork for a national pharmacare program.

MacLeod, however, fears the changes will ultimately drive the list prices down to the point where drug companies will not seek to bring new, game-changing medicines to Canada.

The Canadian Organization for Rare Disorders said it shares MacLeod's concern, adding that while everyone wants to have access to medications at affordable prices, it risks making new therapies less available.

In a letter to Prime Minister Justin Trudeau sent in April prior to the finalization of the regulations, the organization co-signed a letter urging the government to change its course.

"We all want to have access to medicines at affordable prices," the letter said. "However, these proposed changes by the PMPRB will mean that many new therapies will not be available in Canada."

President and CEO Dr. Durhane Wong-Rieger said the organization is worried about the signal the decision sends in terms of Canada's willingness to provide competitive pricing for drugs.

"If we end up being a country that is priced so very low that companies are afraid it is going to impact their ability to actually market elsewhere, they won't come to us first," Wong-Rieger said.

Drug company "innovation" is a bit of a snare and delusion. Companies routinely invest in drugs they know, or hope, will be wildly successful even though they may have dubious therapeutic benefits. Drug approvals are largely granted on the basis of "do no harm" rather than the question of "do they work"? Drug company profits are generated by jackpot drugs like the erectile disfunction cures, And we still have the much derided magical animal parts virility drugs that Asians devour in similar abandon.

Other companies have made their fortunes by peddling highly addictive oxy-codone type drugs with totally, criminally false, claims of "harmlessness". This type of "innovation" is, to say the least, counterproductive.

In fact, the majority of truly effective, if not commercially remunerative, drug advances have come out of the largely publicly funded academic research labs. or from research funded by medical charities. The bottom line for big pharma is purely profit. Human, Animal welfare comes a poor second.