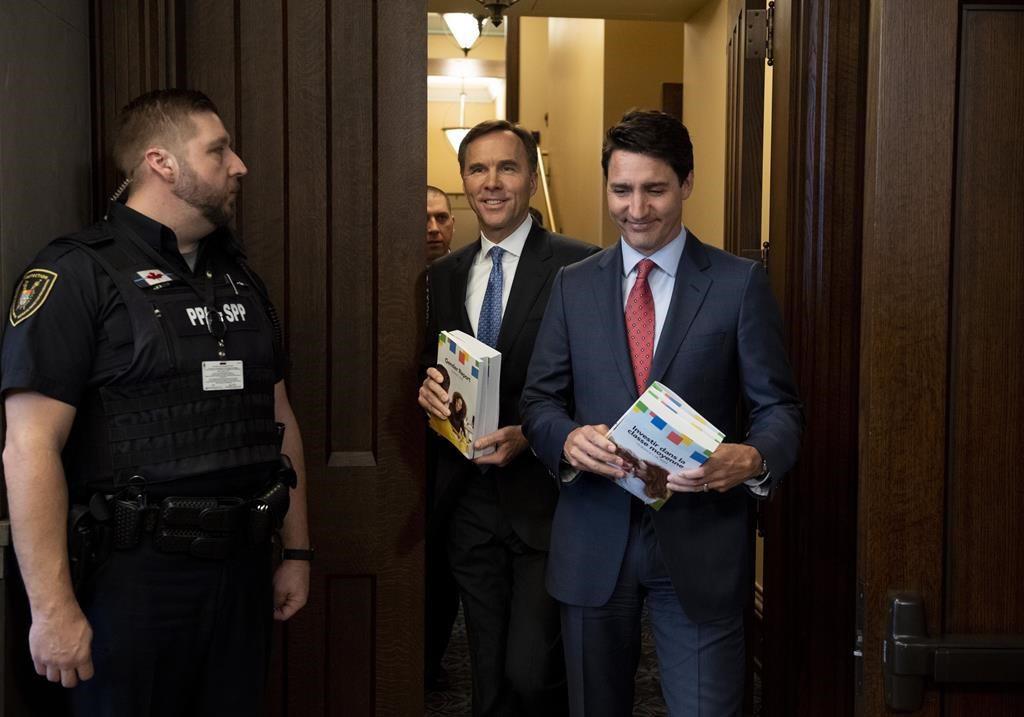 Prime Minister Justin Trudeau and Minister of Finance Bill Morneau arrive in the Foyer of the House of Commons to table the Budget, on Parliament Hill in Ottawa on Tuesday, March 19, 2019. Photo by The Canadian Press/Justin Tang
Previous story
Next story

The federal Liberal government is promising a new agency to negotiate prescription drug prices for Canadians and try to drive down costs — a move billed as an "important step" on the path to an eventual national pharmacare plan.

In a sign of just how expensive pharmacare could be, the federal budget tabled Tuesday is also promising to spend $500 million a year, starting in 2022, to subsidize drugs that treat rare diseases.

The Liberal government said it intends to work with provinces, territories and other partners to develop the mandate for the national drug agency, with Health Canada to receive $35 million over four years starting in 2019-2020 to create an office to support the plan.

The budget, the government's last before this fall's federal election, also includes plans to create a national formulary — a list of drugs that have been evaluated for both efficacy and cost-effectiveness.

The measures in the budget alone will not close the gap for Canadians who require prescription drugs they can't afford, Morneau warned in his House of Commons speech.

"A publicly funded, universal health care system is a source of pride for Canadians and a source of strength for our country. It is a legacy that we are building on with this budget."

A central question remains: how the government plans to pay for it.

A universal pharmacare plan does not appear affordable for Canada right now, said Rebekah Young, the director of fiscal and provincial economics for Scotiabank. Adding such a plan to the government's books without major tax hikes would require stronger economic growth than Canada sees even in the best of times, she warned.

Provinces do not have a lot of capacity to take on substantial new costs, Young said, noting the parliamentary budget office has estimated the cost of a pharmacare plan at about $20 billion a year.

"The big question then becomes who is going to pay and how much?" she said. "That will definitely be a key feature of the summer debate when we head into the election."

The federal New Democrats have promised that if elected, they would follow through on a universal pharmacare plan to respond to dramatic increases in prescription drug costs. Indeed, Tuesday's budget lacks a sense of urgency on the matter, said NDP Leader Jagmeet Singh.

"Canadians were counting on this Liberal government to meet their basic needs, and sadly, they were let down," he said in a statement. "We will have the courage to make different choices."

Canadians spent $33.7 billion on medication in 2018, a staggering increase over 1985, when they spent just $2.6 billion on prescription drugs. People take more drugs to manage more conditions than they used to — living longer, and better, but at considerable expense.

Canada's current patchwork of drug coverage, which comprises more than 100 public programs and 100,000 private insurance plans, is not well equipped to handle the increasingly expensive drugs now coming to market, the government said in its budget document.

"Absorbing these rising costs is difficult for individual Canadians and their families — and poses challenges to the long-term sustainability of government- and employer-sponsored drug plans."

Drug spending in Canada is expected to surpass $50 billion by 2028, the report found.

Dr. Gigi Osler, president of the Canadian Medical Association, said Tuesday she was glad to see some details on the government's pharmacare vision.

"I think it is the first step towards making it (pharmacare) a reality," she said. "Our position is that all Canadians should have access to medically necessary drugs regardless of their ability to pay.

Hoskins' advisory council is set to issue a final report on the issue of access to drug coverage this spring, with the findings to be tabled in the House of Commons.

Hoskins said in an interview Tuesday he was very pleased to see the government adopt the main recommendations from the initial report, adding there is a clear commitment to national pharmacare.

Canadians understand the current system isn't working for them while provinces, territories and the private sector agree the approach is unsustainable going forward due to rising costs, he said.

"It's kind of like all those things have come together — maybe this is finally the time."

—with files from Lee Berthiaume