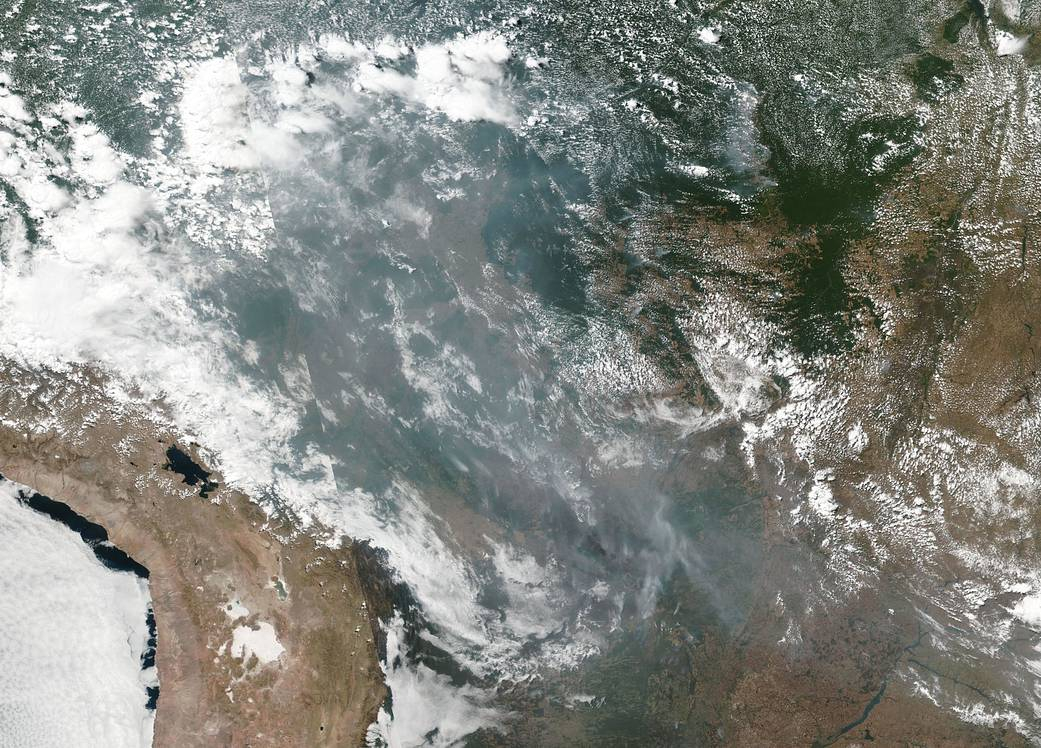 This natural-color image of smoke and fires in several states within Brazil including Amazonas, Mato Grosso, and Rondônia was collected by NOAA/NASA's Suomi NPP using the VIIRS (Visible Infrared Imaging Radiometer Suite) instrument on Aug. 20, 2019.
Previous story
Next story

The fires in the Amazon are “extraordinarily concerning” for the planet’s natural life support systems, the head of the UN’s top biodiversity body has said in a call for countries, companies and consumers to build a new relationship with nature.

Cristiana Paşca Palmer, the executive secretary of the UN Convention on Biological Diversity, said the destruction of the world’s biggest rainforest was a grim reminder that a fresh approach was needed to stabilise the climate and prevent ecosystems from declining to a point of no return, with dire consequences for humanity.

“The Amazon fires make the point that we face a very serious crisis,” she told the Guardian. “But it is not just the Amazon. We’re also concerned with what’s happening in other forests and ecosystems, and with the broader and rapid degradation of nature. The risk is we are moving towards the tipping points that scientists talk about that could produce cascading collapses of natural systems.”

The world’s environmental crises are an increasing concern in international politics. Deforestation of the Amazon was high on the agenda of this week’s G7 meeting in Biarritz, France. In September, world leaders will gather in New York for a climate action summit. Next year, they are scheduled to get together again for a nature summit before a UN biodiversity conference in Kunming, China, in October.

Amazon fires: the tribes fighting to save their dying rainforest – video

Paşca Palmer said: “I am grateful that [French president Emmanuel] Macron gave biodiversity a level of attention that we haven’t seen before. I hope this is not an isolated event at a G7, but that it continues as we move forward and that it will inspire a race to the top for political leaders.”

Nature needed to be at the heart of any proposed solution, she said, adding: “We cannot treat this in isolation. We cannot solve climate change without biodiversity.”

For most of the past three decades, the natural world was treated almost as an afterthought by world leaders. If discussed at all, it was with platitudes about the need to save polar bears and tigers. But the collapse of pollinator populations and growing awareness of human dependence on forests and other ecosystems has started to make an impact.

This year, the world’s leading scientists warned that human civilisation was in jeopardy because forest clearance, land-use shifts, pollution and climate change had put a million species at risk of extinction.

Many environmentalists were dismissive of the $20m the G7 offered to support firefighting operations in the Amazon, but there is more optimism about the longer-term reforestation plan that France and Chile have promised to announce at next month’s climate action summit.

The UN official said the G7 fund was valuable but money was not enough. “We need to address the root causes,” she said. “Even if the amount involved in extinguishing fires in rainforests was a billion or 500 million dollars, we won’t see an improvement unless more profound structural changes are taking place. We need a transformation in the way we consume and produce.

“This is not just about biodiversity conservation, it’s about finance and trade and changing the model of development. We need to put biodiversity and natural capital at the centre of the economic paradigm.”

At the climate action summit in September, world leaders will be asked to raise their emissions-cutting ambitions and to explore new approaches to drawing carbon dioxide out of the atmosphere. They will discuss nature-based solutions, which covers how restoration of forests can help to stabilise the climate.

Among those who will address the summit is the Swedish climate activist Greta Thunberg, who arrived in New York this week after sailing across the Atlantic on a zero-carbon racing yacht.

“Even on a boat I heard about the fires in the Amazon, the rainforest. It’s devastating,” she told a press conference on the quayside. “It’s so horrible. It’s hard to imagine. The war against nature must end.”

Earlier in the year, the teenage campaigner urged action against deforestation. “We are literally sawing off the branch we live on,” she wrote.

Several countries have recently organised massive tree-planting campaigns. Last month, Ethiopia claimed a record of 350m seedlings in a day. There have also been significant efforts in China, which has pledged to plant an area the size of Ireland every year, while the Indian state of Punjab has introduced a scheme to link gun licences to tree planting. Scientists say tree planting has an important role to play in climate stabilisation, but protection and restoration of existing forests was essential, particularly in the tropics.

Paşca Palmer stressed the need for an integrated approach, such as the biodiversity programmes drawn up by Costa Rica and Colombia, which she hopes will lead at next year’s global meeting in Kunming to a new global framework for biodiversity. “I hope this will have a snowball effect,” she said. “It’s a growing movement. I feel that now the heads of state are embracing this, we have a good signal.”

We are in a "war" of our own species waging against itself. The realization of this on a global scale has yet to happen. If there is to be any hope for survival of our species beyond the next few generations, a global agreement to allow that to happen will be needed and now. The cost in human lives will be exponential the longer we put off "living within Nature's means". The alternative is extinction along with that million or so other species that are also already destined for extinction at our hand. Why do so many favor extinction??