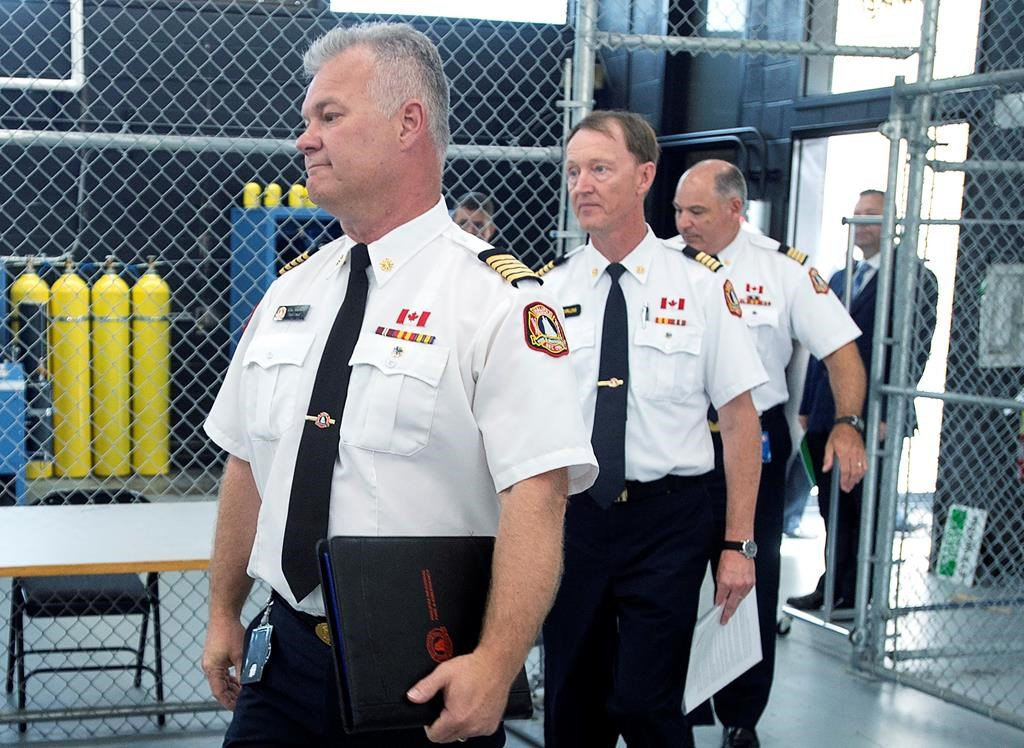 Halifax Fire and Emergency Chief Ken Stuebing, Deputy Chief Dave Meldrum and Deputy Chief Peter Andrews, head to an update on the investigation into the fire that killed seven children in February, in Halifax on Sept. 4, 2019. Photo by The Canadian Press
Previous story
Next story

Nearly seven months after a devastating house fire claimed the lives of seven children, investigators in Halifax say they have been unable to determine the cause of the blaze.

"Our firefighters responded to a call they will never forget," Chief Ken Stuebing of Halifax Regional Fire & Emergency said Wednesday during the first significant update on the department's investigation since the Feb. 19 fire.

"In this case we investigated every piece of evidence available and tested every possible theory. Despite our best efforts we are unable to say what caused this tragic event."

Syrian refugees Ebraheim Barho and his wife Kawthar survived the fire that destroyed their new rental home in the Halifax suburb of Spryfield, although Ebraheim Barho sustained severe burns and is still hospitalized.

The couple's seven children, who ranged in age from three months to mid-teens, perished inside the home.

Stuebing said investigators were able to determine only that the fire started in the back of the house in the main-floor living room near a couch.

He said nothing leads investigators to believe the fire was suspicious, and they have ruled out smoking materials, kitchen activities and electrical faults as possible causes.

Halifax Fire lent two investigators to the probe which was carried out in consultation with the provincial Fire Marshal's Office, the property owner's insurance company and various experts.

"All of us came up with the same conclusions," Stuebing said.

In a curious twist, Stuebing said investigators had determined that the circuit breakers to the electric baseboard heaters were in the off position before the fire meaning there was no power directed to heating sources in the house.

However, there was no explanation as to what the family may have been using for a heat source on what had been a very cold winter night.

"We don't have any evidence of another heat source in the building," said division chief Matt Covey. "There was no space heater found in the house. Keeping in mind that this was a very hot fire and so most of the objects on the main floor were completely burned away."

Covey cited department policy in refusing to say whether any witnesses, including Kawthar Barho, were able to shed any light on how the home was being heated.

According to the department, dispatch received the first of multiple calls about the fire at 33 Quartz Drive at 12:41 a.m. The first truck was at the scene within six minutes and five seconds.

Eight trucks responded with a total of 51 firefighters.

"We don't know how quickly the fire spread," said deputy chief Dave Meldrum. "What we do know is when our firefighters arrived, they encountered a building with heavy fire involvement on two levels. The fire was well advanced when they got there."

Meldrum said a complicating factor in determining possible causes of the fire was the inability of investigators to talk to Ebraheim Barho because of his medical condition. He was placed in a medically induced coma shortly after his arrival at hospital.

In an interview with The Canadian Press in July, his brother Ali Barho said Ebraheim was still heavily sedated and had no idea about the extent of the tragedy that befell his family.

"Mr. Barho has been unavailable to us," Meldrum said. "This certainly is one of the reasons that we've taken time to gather all of the evidence that we could."

The Barho family, originally from the war-torn Syrian city of Raqqa, arrived in Canada as refugees in September 2017.

They first settled in rural Elmsdale, N.S., about 35 minutes north of Halifax, but they eventually moved to Spryfield to take advantage of immigrant services, including English-language training.

The fire rocked the Halifax community and touched people across the country.

"This call was certainly a tragedy, and our hearts and thoughts remain with the Barho family and our community," said Stuebing. "I know our crews did everything they could on that cold night."

Outpouring of support after children's deaths: 'Everyone is pulling together'