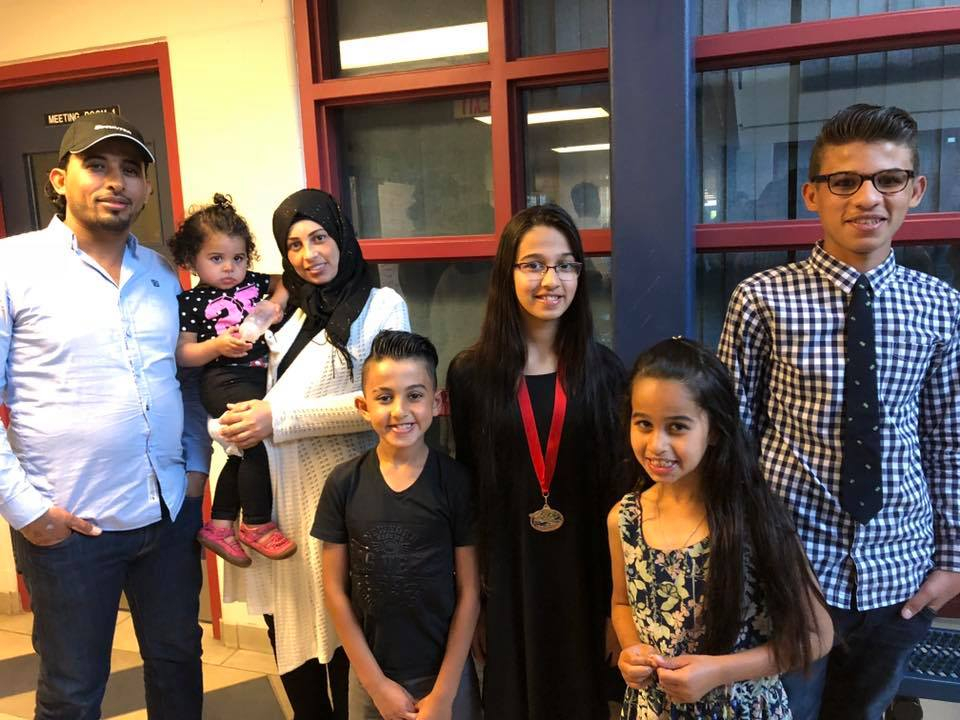 An image of the Barho family. Facebook photo from Ummah Masjid And Community Center
Previous story
Next story

Relatives of the seven children who died in a fatal house fire in Halifax Tuesday are grieving and desperately seeking a way to come to Canada to support the surviving parents.

The seven kids were sleeping upstairs in their rented home when the fire broke out. They have been identified as Abdullah, three months old, Rana, 2, Ghala, 3, Ola, 8, Mohammed, 9, Rola, 12 and Ahmed, 14.

Their father, Ebraheim Barho, is in the hospital with critical injuries after trying to rescue his children.

The news traveled to relatives across the Middle East, starting with Nihad Alhimd who received a message on Facebook yesterday from one of the family's neighbours and the imam of the local mosque. Alhimd is Ebraheim Barho's nephew, he told National Observer in a WhatsApp conversation.

"I spoke with (them) and even cried and I did not understand anything," Alhimd wrote to National Observer. English is not his first language, so Alhimd used Google translate to speak with National Observer in English.

Alhimd said after receiving that Facebook message, he did an internet search for "Canada Halifax" and saw "the painful news."

There is a pile of flowers and stuffed animals in front of the house today. Now a campaign has started to get people to leave a teddy bear or stuffed animal in front of their own front door today to show support for the family and honour the lives of the 7 children. #Spryfield pic.twitter.com/oMm7ItaKPD

Alhimd, 20, lives in Istanbul, Turkey and has been fielding requests from relatives in Lebanon and Syria who are seeking more information about how the parents' siblings can help their faraway relatives.

Kawthar Barho, the mother of the seven children, has a brother in Italy and Lebanon, he said, both of whom are also refugees. Her father is in Syria "under bombardment and war."

"How can I get to my sister and stand with her in this distress and tragedy?" her brother in Lebanon, Ali Rashid Al-Abbou, wrote in a message that was shared by Alhimd. "How can I come to Canada?"

The family is in shock, Alhimd said.

The Barho family left Syria around 2013, Ahimd said, "to obtain a secure life." They were approved by the United Nations in 2017 to move to Canada "to obtain security, stability and livelihood."

According to a CBC report, the Barho family arrived in September 2017, originally settling in Elmsdale, N.S., just outside Halifax. They were helped by the Hants East Assisting Refugee Team (HEART) Society.

The Enfield Weekly Press posted a video of the group welcoming the family upon their arrival at the Halifax airport.

"I talked to them every time (sic) and they were very happy," Alhimd said. "But God's destiny and actions (had) the painful news."

The kids were studying at school, Alhimd said. The eldest "was outstanding."

Kawthar spoke to him and her brother Wednesday morning in a video call, Alhimd said. She was in the hospital "and not in her consciousness."

"Her condition was not very good," he said. She was "shocked and psychologically unhealthy."

"Her brothers and her family want to go to her side," Alhimd said, adding that the Barho family didn't have passports.

"We want to bury (the children) in Syria," he added, expressing sadness that doing so wasn't possible.

Investigators had not yet determined the cause of the fire, but spent Wednesday examining the remnants of the house. "Fire department officials told media they had no evidence to suggest it was suspicious," The Canadian Press reported.

The family has received an outpouring of support from around the world. An online fundraiser has been set up to assist the family. As of Feb. 20, it had raised over $331,000 from the contributions of 6,842 people.

Prime Minister Justin Trudeau was scheduled to appear at the Halifax City Hall vigil for the Barho family Wednesday evening.

Set up for the Barho Family vigil underway at #Halifax Grand Parade. PM Trudeau to roll in around seven. #cdnpoli pic.twitter.com/eStoZWZrLa