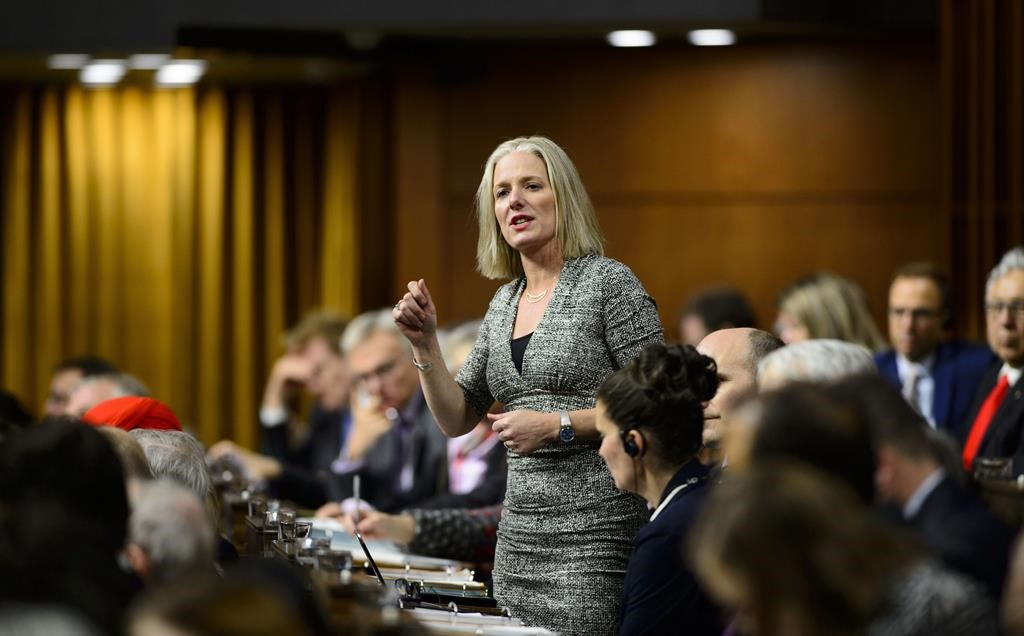 Minister of Environment and Climate Change Catherine McKenna stands during question period in the House of Commons in West Block on Parliament Hill in Ottawa on Tuesday, Feb. 5, 2019. File photo by The Canadian Press/Sean Kilpatrick
Previous story
Next story

Environment Minister Catherine McKenna says she was recently walking outside a movie theatre with her children when a car slowly pulled to a stop beside them.

The driver rolled down his window and then he let fly.

"F*** you, Climate Barbie," he shouted, as she tried to back away from his car and get her kids away from him.

Much has been written about the online abuse and threatening behaviour politicians — especially female politicians — and others in the public eye face every day. But McKenna says as the heat around climate change continues to grow, that abuse is going from anonymous online vitriol to terrifying in-person verbal assaults.

The incident at the movie theatre is just one of several times her kids have been with her when someone in public began to yell at her. She has been called the C-word, a traitor, an enemy and a "communist piece of garbage." Her family's safety has been threatened more than once. Some people have wished she and her children will get fatal diseases. She has received sexualized messages so hateful they could be enough to make even the hardest of hearts skip a beat.

"You're a stain on this country and I hope you rot in hell," said another.

The threats have become real enough that McKenna sometimes now requires a security detail, a level of protection even cabinet ministers don't usually get.

"There are places, yes, that I have to have security now and I don't think that's a great situation," she said. "I'm someone who is trying to do my job, live my life, and talk and engage with people, and it makes it harder. I'm not going to let this stop me but I wish it would stop."

McKenna would not elaborate on the security needs, so as not to reveal when she has less protection. She said the online abuse in particular has been going on since she was elected, but that in recent months it has gotten much worse in person.

"The challenges, the increases of this, is worrying for everyone," she said.

McKenna is not alone in fearing for her safety. Tzeporah Berman, international program co-ordinator for Stand.Earth, said earlier this summer that she has received death threats and was physically assaulted in the Edmonton airport by a man angry about her campaign to close down the oil sands.

Catherine Abreu, the executive director of Climate Action Network, Canada, said the issue is a constant source of frustration and fear for environmentalists.

"We talk about it every single day," said Abreu. "There are many people in my community who feel they are under threat."

Abreu and Berman both point to politicians as stoking the fires. Abreu said U.S. President Donald Trump's rhetorical attacks have emboldened people who now feel it is perfectly acceptable to insult, abuse and threaten people they disagree with.

Berman said the threats and attacks against her worsened after Alberta Premier Jason Kenney launched his "war room," a $30-million project to discredit people he says are using foreign funding to undermine Canada's energy sector. Berman and others are being named by the Alberta government and called enemies for opposing the oil industry.

"Since @jkenney announced his $30 million warroom to attack environmental advocates & this poster of me was held up at his press conference I have had death threats, misogynist & sexual attacks on social media," she tweeted in June. "This is what that kind of fear mongering & hate does."

An attached image shows a sheet of paper with a photo of her speaking into a bullhorn in front of a banner reading "NO TARSANDS PIPELINE." Below the photo are the words "Tzeporah Berman: Enemy of the oilsands." Kenney didn't hold it up but a supporter introducing him at a pro-oilsands news conference in June did.

A spokeswoman for Alberta Energy Minister Sonya Savage said "in no way does our government condone any form of abuse, verbal or otherwise, towards private citizens or elected officials."

Samantha Peck said the "Fight Back Strategy" is in development but the war room itself has not yet been established and hasn't issued any publications naming any specific individuals.

The United Conservative Party has named at least one individual in a fundraising pitch to supporters.

Emma Jackson, who works from Climate Justice Edmonton, shared the letter on Aug. 30, which named her as a "radical anti-oil and gas activist."

Berman's tweet was itself met with a torrent of abuse, many of which called her a liar or said she deserved everything she got. A handful of people said while they disagreed vehemently with Berman's activities, the threats and abuse were not acceptable. They, too, were then attacked.

McKenna said she doesn't call this sort of thing out often because she fears giving abusers attention. In 2017, she did stop to call foul when Conservative MP Gerry Ritz referred to her on Twitter as "Climate Barbie."

The insult was coined by the right-wing website, The Rebel, shortly after McKenna was named environment minister and has been used in hundreds, if not thousands, of insults hurled her direction.

Ritz, a former agriculture minister who has since resigned from Parliament, deleted his tweet and apologized for the slur when it was met with outrage.

McKenna said the fact that climate-change deniers have now verbally attacked Greta Thunberg, a 16-year-old Swedish climate activist, proves just how low some will go to discredit their opponents.

People's Party of Canada Leader Maxime Bernier was among them, accusing Thunberg in a tweet of being mentally unstable. He later said he wasn't trying to insult her, just show that she was a pawn being used by adults to put an unassailable face on their lies that climate change is a human-caused emergency.

And people working for "The

And people working for "The Rebel" *whining* about being called "climate deniers" .. as if that provides some kind of moral equivalency or helps to justify their hateful attacks. So pathetic on so many levels.

I'm sure that these people have always existed, the new problem is how much they are emboldened to act out by the amplifying bull-horn afforded to them by social media 'engagement' algorithms.

There is something woefully

There is something woefully familier about the abuse being directed, especially, at the women who persist in leading, supporting, pushing for all kinds of rights. There are notable examples throughout recent history - the persecution of suffragettes, the women who dared to challenge exploitative employers in the early 1900's vis-a-vis the Ladies Garment Workers unionization, etc., and more recently, those who have pursued justice against the crimes of sexual assault, and those who have challenged the glass ceiling.

Any woman who dares to challenge the perceived right to supremacy by the privileged male power construct, is usually met with the common reaction of fear and hate. This was the most effective political tactic deployed on every level imaginable against Hillary Cllinton.

I don't know if European women leaders have to endure the same level of spite, but that women in the "new world" ostensibly founded by people escaping from the hate and intolerance of the old world should be dealt such violence against their rights is just more proof of the hypocrisy of North American male society.

Part of Mr. Trump's playbook seems to be to attempt to weaponize these, to use a polite term, wack jobs, and then step back while still providing some political cover.

Social media companies on the other hand try to monetize them while externalizing any cost to society.

I'm not sure which is worse.

Betsy,
Very true. I would argue also that the mothers & fathers of these people failed in raising civil children. It is now our duty to re-train them to civil discourse.
Pam

Who are the parents of these

Who are the parents of these people that feel they say such UNCIVIL comments to ANYONE in society? These are major parenting fails. These are also community failures that these people feel that they can speak this way. If one KNOWS people like this, please take responsibility and tell them to clean up their act. Learn civility! One does not have to agree with everyone or anyone, but one should be civil and NOT threatening. It is time for those of us with decency and intelligence to re-train these people to a higher level of discourse. Our society deserves better.

Perhaps. But to paraphrase

Perhaps. But to paraphrase David Dunning and others - it's hard to fix stupid. And what if their parents are already dead, and they have no real friends, are you willing to step up? :) To wit, a great quote from David Rutter in the Chicago Tribune - Those who fall in the bottom 10 percent of knowledge about everything from grammar to politics to nuclear physics always believe they are in the 60th percentile. They even think they know what "percentile" means, but they don't.

I sort of wish my Dad gave me 413 million dollars to start a business. :)