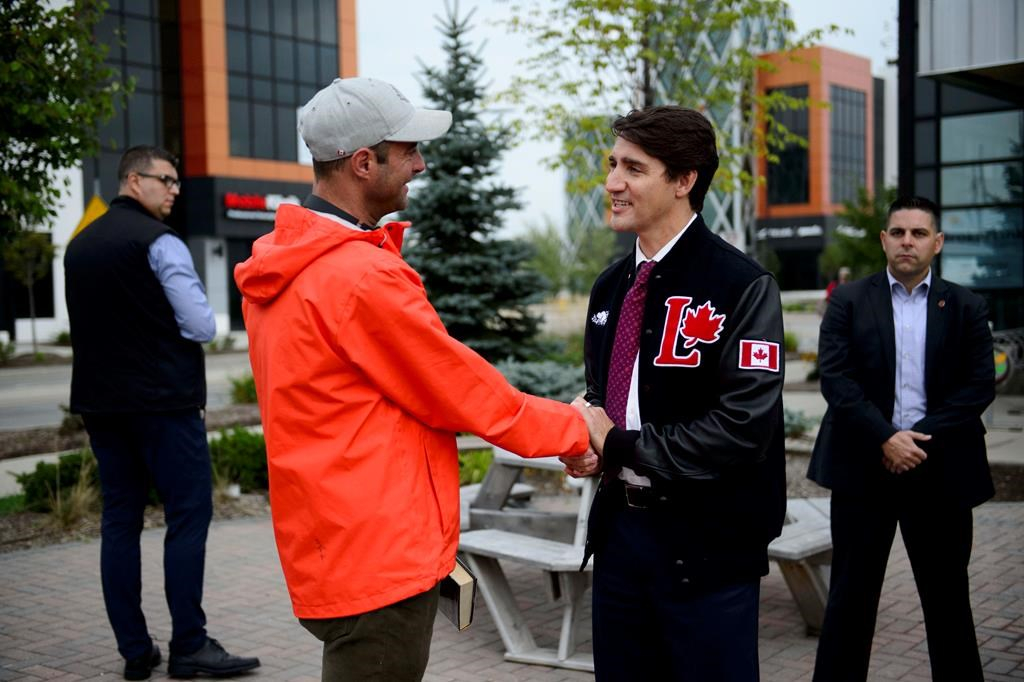 Trudeau's campaign announcement that a re-elected Liberal government would create up to 250,000 more spaces for before- and after-school child-care programs was a notable departure from a stance he took on the issue less than two weeks ago.

The 250,000 new spaces would be on top of previous commitments to expand child care for children who are not yet school-age under a deal signed with the provinces and territories in 2017, Trudeau promised on the campaign trail in southwestern Ontario.

The Liberals are promising to cut the fees parents pay for these elementary-school programs by 10 per cent. They would also ensure that 10 per cent of the new spaces go to help out parents who work outside normal hours.

The promise would cost at least $535 million per year, on top of what the federal government is already sending to provinces for child care.

The Liberals promised in 2015 to create a national child-care framework they said would make sure "affordable, high-quality, fully inclusive child care" is available to everyone who needs it. In government, the Liberals signed a multilateral deal with all provinces and territories (except Quebec, which has its own universal child-care system) and committed $7.5 billion over 11 years to child care in the 2017 federal budget.

The framework set out broad parameters for how the money is to be used, but the provinces and territories were mainly in charge of deciding how it would be spent.

Earlier this month, Trudeau told the Toronto Star the provinces should be the ones to decide whether they do more.

"Of course the federal government can be there as a partner, but we can't take on things that fundamentally it's been shown can be ably led and should be ably led by the provinces," he told the editorial board of the newspaper, praising Quebec for establishing its own universal program.

When challenged Monday about why he is now pledging federal action on the issue, Trudeau said he believes the federal government has a role to play.

"Provinces have a really important role to play and they need to continue to step up, but the federal government will be there as well," he said.

Morna Ballantyne, executive director of Child Care Now, said a lack of before- and after-school care, as well as the costs, are key issues in many parts of the country.

"It's an area where there's very high need," Ballantyne said.

She said child-care advocates hope Monday's announcement isn't the end of pledges from parties to help parents with children.

"So far the reaction is positive, but we're waiting because it's a not a complete response to the crisis of child care that parents are facing," she said.

"Just because your child goes into kindergarten, or Grade 1, doesn't mean your child-care needs end. In fact, it in many ways becomes a little bit more complicated," he said.

"It's not an easy solution for families, so to include them now is, I think, a really good step and I think to talk about affordability for those families is also a really progressive step."

The pledge partly responds to prodding from child-care groups that have met with the Liberals during their years in government, hoping to get them to expand on the 11-year, $7.5 billion spending pledge made two years ago.

The Liberals have been pressed to increase child-care funding to at least $1 billion annually, roughly double current spending under the framework but still well below what the Organization for Economic Co-operation and Development estimated the country could spend on subsidized spaces to help more parents, particularly women, enter the workforce.

And what groups are hoping is that if the spending comes to fruition, the money flows largely to regulated child care spaces.

Groups have also pressed for something like a new secretariat tucked into Monday's announcement that would act as a focal point for policy development, oversight and accountability.

Over the previous two days of campaigning in southern and southwestern Ontario, Trudeau has been repeatedly dropping Ontario Premier Doug Ford's name as part of his campaign against Conservative Leader Andrew Scheer. Ford said last month his Progressive Conservative government would move ahead with planned cuts to child care.

As of Jan. 1, municipalities in Ontario will have to pay 20 per cent of the cost of creating new child care spaces, which were previously fully funded by the province.

Trudeau ended the day with a boisterous rally in Windsor, the heart of Canada's auto industry, where he lauded his government for emerging from tortuous negotiations on a new North American Free Trade Agreement with "a win for Canada."

He also credited business leaders, unions, provincial governments, Indigenous groups and "former Conservative leaders" for coming together to play for "one Team Canada" throughout the negotiations — everyone except Conservative leader Andrew Scheer, who now accuses the Liberals of having sold out to U.S. President Donald Trump's demands.

"Unfortunately, you see, not everyone was playing for Team Canada. Andrew Scheer wanted us to cave on NAFTA. He wanted us to lift our tariffs and fold to (U.S. President) Donald Trump's demands," Trudeau said.

Foreign Affairs Minister Chrystia Freeland told the rally that Trump's threat to rip up NAFTA posed "an existential threat to our country" but she said Trudeau had "nerves of steel and he hung in there" to win a "great deal" for Canada, along with the lifting of crippling U.S. tariffs on Canadian steel and aluminum.

—With files from Jordan Press in Ottawa