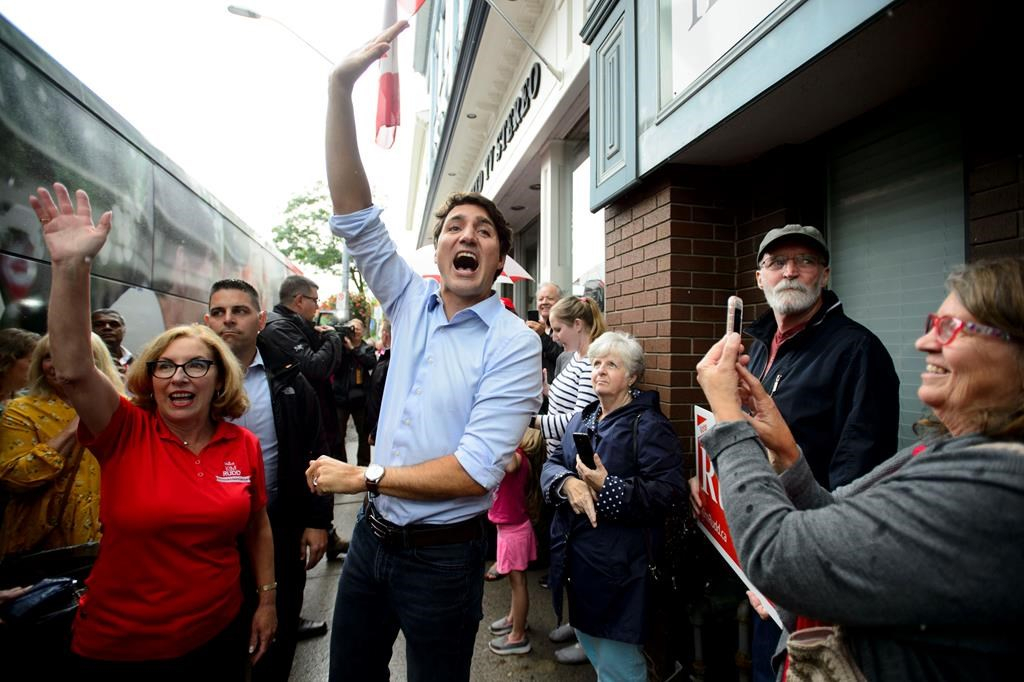 The Liberals and New Democrats are both making promises that would need some collaboration with the provinces to become reality, at a time when powerful premiers have made it clear they see a relationship with Ottawa that is headed in a very different direction.

Justin Trudeau announced that a re-elected Liberal government would work with the provinces and territories to increase the benefit paid to surviving spouses through the Canada Pension Plan and the Quebec Pension Plan by 25 per cent.

"Our government is giving those who have lost a loved one some much needed breathing room as they grieve and adjust to a new life," Trudeau said Wednesday in Fredericton.

The Liberals also promised to increase old age security benefits by an extra 10 per cent once seniors reach age 75.

The 2015 federal election also saw the Liberals run on a promise to upgrade the public pension system.

After coming to power, they were able to work out a deal with the provinces — excluding Quebec, which has its own pension plan — that would see contributions increase gradually beginning this year and, eventually, boost benefits for retirees on the other end.

Those negotiations had some bumps along the way, including when B.C. did not ratify the deal as quickly as expected, but they went smoothly enough that Ontario ended up abandoning an effort to create its own separate public pension plan.

The promise Trudeau is making in this campaign comes in a very different context, when Conservative premiers such as Doug Ford in Ontario and Jason Kenney in Alberta, among others, have been opposing the federal carbon tax and otherwise showing they are not willing to give the Liberals an easy ride.

Trudeau appeared to express some frustration with the state of things on Wednesday, when he answered a question about why voters have been electing Green party candidates in recent provincial elections at a time when the Liberals have put such an emphasis on climate change.

"Even though the vast majority of Canadians are really concerned about the environment and about fighting climate change, in provincial governments right across the country, there have been conservative premiers elected who don't believe in fighting climate change, who don't believe that protecting the environment needs to be a priority," Trudeau said.

"People are choosing premiers who are choosing to use millions of dollars of your money to fight a concrete plan, to fight climate change in the courts, instead of figuring out to how to work with us to build a better future in which we can have a stronger environment and make life more affordable for all Canadians," Trudeau said.

Meanwhile, NDP Leader Jagmeet Singh promised to extend full public dental coverage to those whose household incomes are less than $70,000 year — billed as a move toward eventually including dentistry in universal public health care.

Singh said the NDP "denticare" plan, which would also include partial coverage for households with incomes between $70,000 and $90,000, was designed to be fully paid for by the federal government.

"There is no provincial investments and it's going to (take) a lot of pressure off the provincial system," Singh said in Sudbury, Ont., on Wednesday.

It is clear, though, that the NDP views this initial program as a stopgap.

Singh hinted at those conversations to come when he said he hoped that by relieving the provinces of some of the burden, they would start looking at how they could expand their own existing programs that subsidize dental care.

"It's going to lift the cost off of provinces in such a massive way, that we want to negotiate to increase funding for the provincial programs that do exist," Singh said. "We don't have control over those provincial programs. They are good starts, but they don't go far enough."

On Tuesday, Quebec Premier Francois Legault issued a list of demands to the federal party leaders, asking for his province to have greater control over immigration, tax collection and language regulation.

Scheer did say he is willing to work on eliminating federal-provincial duplication of labour market opinions for temporary foreign workers (sometimes an impediment to allowing them into the country quickly) and committed to changes that would see Quebecers file only one income tax return (Quebec requires residents to file separate tax forms but is willing to combine them if the provincial government gets to handle both the federal and provincial systems).

Scheer said he would also be prepared to stand up for his promised national energy corridor, even if it means having to assert federal jurisdiction over any opposition to pipelines that would run through Quebec.

"This can be accomplished in a manner of collaboration with the province of Quebec."

Scheer also announced on Wednesday that a Conservative government would find $1.5 billion in savings each year by eliminating some of the federal funding received by businesses.

The promises came as the federal election campaign marks a milestone today: one week down, four-and-a-half to go.

Green party Leader Elizabeth May, who released her platform this week, is back in Vancouver.

People's Party of Canada Leader Maxime Bernier is in New Brunswick, for the latest in a series of relatively low-key meet-and-greets with local candidates.

Despite all the leaders' moving around the country, the polls aren't moving that much. New data released today by Leger shows the Liberals and Conservatives are still neck-and-neck for the lead, and the NDP and Greens fighting for third place.

Elizabeth May seeks to blow past political pack with platform rollout