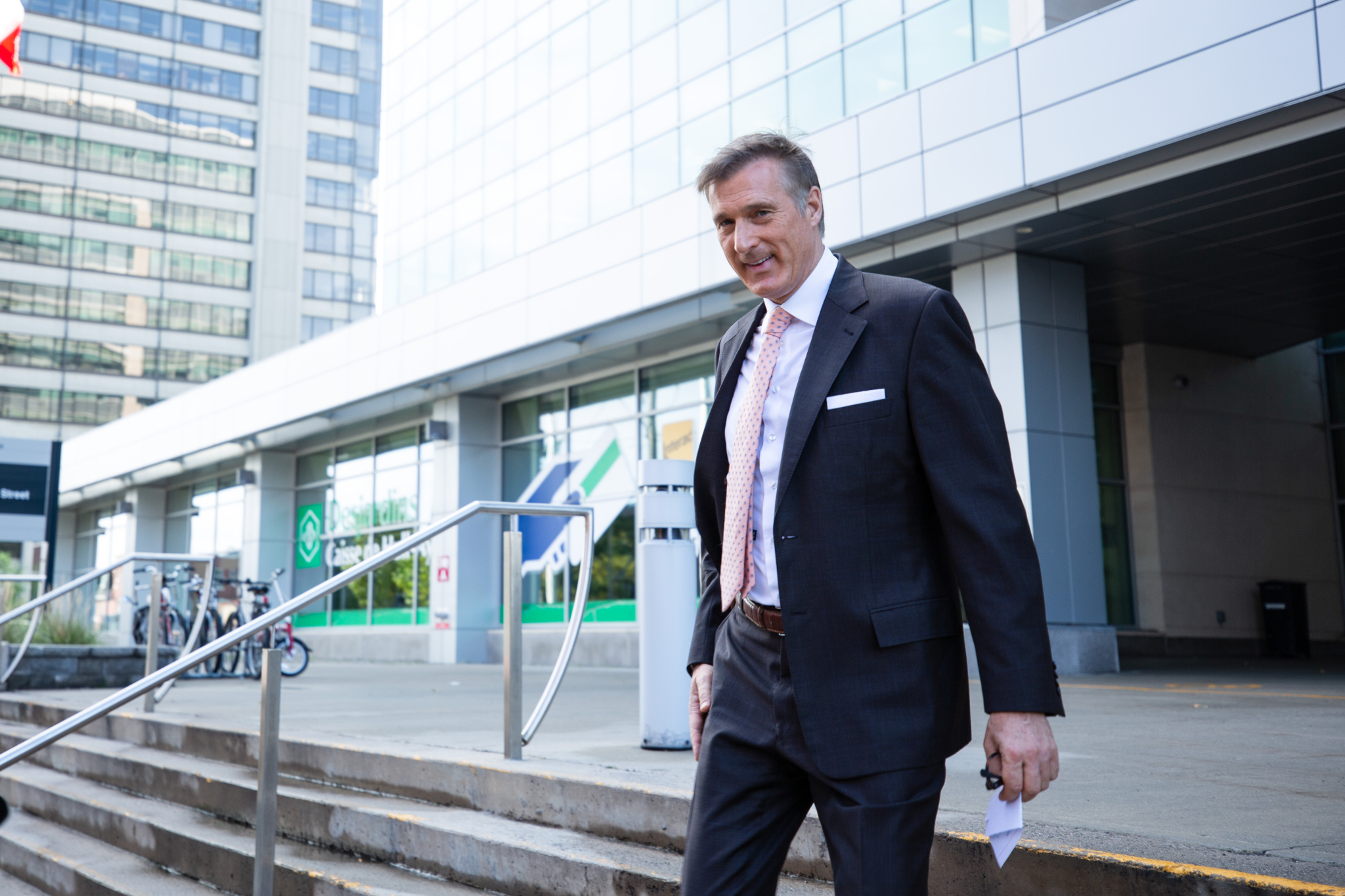 People's Party of Canada Leader Maxime Bernier leaves the Elections Canada office in Gatineau, Que., on Oct. 10, 2018. Bernier was there to drop off his official party application in preparation for the 2019 elections. Photo by Alex Tétreault
Previous story
Next story

Maxime Bernier has been invited to take part in Canada’s official election debates next month, a huge victory for the leader of the upstart, right-wing People’s Party of Canada (PPC).

“Based on our further evaluation, I’m satisfied that more than one candidate endorsed by the party has a reasonable chance to be elected,” former governor general David Johnston, head of the commission in charge of organizing the debates, said in a Sept. 16 statement.

The decision to include Bernier marks a successful conclusion to a long-running campaign by the PPC, including through pushing a petition, to get its leader into the debates.

A chance to debate Prime Minister Justin Trudeau and other party leaders onstage during national televised events will undoubtedly bestow upon Bernier and the PPC a new level of mainstream Canadian political exposure.

Bernier launched the party in September 2018, soon after denouncing “ever more diversity” in Canada. He says he wants “fewer immigrants” and has campaigned on drastically slashing the number of legal immigrants allowed in.

He has also said he doesn't "believe in mass immigration” and that helping refugees seeking asylum at the U.S. border doesn’t align with “Canadian values.”

In August, the party fired the head of its St. Catharines riding association after he was alleged to have been tied to an American neo-Nazi group, according to the St. Catharines Standard. Last week, a PPC candidate in B.C. was told he was no longer running for the party after asking Bernier to denounce racism and white supremacy, Global News reported.

Bernier has said “racists and bigots are not welcome in our party.”

Meanwhile, the former Conservative, who came close to defeating Andrew Scheer in that party's leadership race, has also suggested carbon dioxide "is not pollution" and has argued “there is no climate change urgency” in Canada.

Federal Canadian scientists concluded in a major report this year CO2 and other greenhouse gases released from the burning of fossil fuels must be reduced to “near zero” by 2050 in order to avoid extreme effects of climate change like urban and coastal flooding, increased wildfires and heat waves, declining freshwater and other factors.

Bernier was accused of being a “climate criminal” and a racist by one woman who showed up for a campaign event in London, Ont., last week, according to a reporter for 980 News who filmed the interaction. Bernier responded by saying, “We cannot be racist when we are Canadian."

Bernier was initially shut out of the Oct. 7 (English) and Oct.10 (French) debates when Johnston announced them on Aug. 12. Johnston said Bernier didn’t satisfy the criteria against which the commission was mandated to screen potential participants.

That criteria — formed after the Trudeau government established the commission following the 2015 election — holds that a party leader must satisfy at least two of three conditions: have a sitting MP who was elected as a member of their current party; intend to endorse candidates in 90 per cent of ridings; and either have candidates in the last election with four per cent of the votes or have a reasonable shot at getting elected this time.

On Aug. 12, Johnston noted Bernier failed the first test (he was elected as a Conservative before quitting in 2018 to form his new party) but passed the second test, as he was intending to endorse candidates countrywide.

Johnston said at the time he had “not yet seen sufficient evidence” to conclude one way or another on the third test. He sent a letter to the party the day of his decision, saying this was his preliminary assessment and asking for a list by Aug. 23 of three to five ridings most likely to elect a PPC candidate.

On that day, the party provided five candidates it thought were prominent figures and had an edge in their ridings: Renata Ford, the widow of former Toronto mayor Rob Ford; Mark King, a former Tory candidate and North Bay city councillor; Steven Fletcher, a former Harper-era minister of state; Corneliu Chisu, a former Conservative MP; and Bernier himself.

The letter stated in part that Bernier expected the PPC candidates to gain in stature due to a "high level of volatility and disaffection of the electorate, and the fact that populist parties similar to the PPC have experienced very rapid growth in other western countries."

After receiving the Aug. 23 letter, the debates commission gave the PPC until Sept. 9 to provide more evidence.

In a press release Monday, Johnston said he had received the requested additional evidence on Sept. 4 and Sept. 9. The commission said the evidence concerned “party membership, fundraising and organizational capacity” as well as “riding level polls” conducted by the commission, “publicly available riding polls and expert analysis” and finally, “prominent media presence on a range of national issues.”

“With the benefit of more recent information, I am of the view that the PPC has attracted a significant number of party members, has established a notable presence in the media and on the political landscape and, based on recent polling data, has achieved a reasonable chance of success in more than one riding,” Johnston said.

“All of these factors together enable the PPC to satisfy two of the criteria established in our Order in Council.”

How Bernier hijacked the #ClimateChange discussion

People's Party makes its case to enter debates, but will they prevail?

Is the PPC still opposed to

Is the PPC still opposed to including GPC leader Elizabeth May in the national debates? And if so on what grounds?

In my humble opinion GPC has a more legitimate claim to participation than Bernier and his cock-a-mamie repluslive anit-immigrant platform.

Bernier's participation in the debates will undoubtedly increase the number of votes the PPC will get. These votes will come from only two sources: Those who would otherwise not have voted or would have voted Conservative. So that's good news for the progressive vote.

The only unfortunate thing is that inevitably part of the precious debating time will be spent on arguing against his climate-denying and anti-immigrant views.