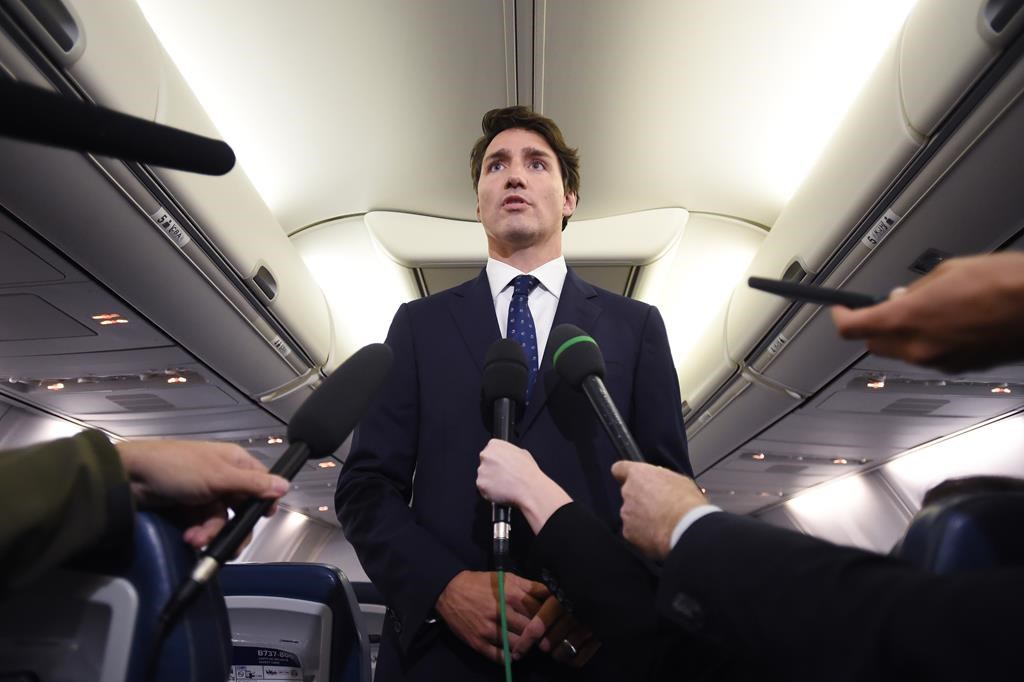 Liberal Leader Justin Trudeau makes a statement in regards to photo coming to light of himself from 2001 wearing "brownface" during a scrum on his campaign plane in Halifax, N.S., on Wed., September 18, 2019. Photo by The Canadian Press/Sean Kilpatrick
Previous story
Next story

It won't be campaigning as usual for Justin Trudeau today as a third instance of the Liberal leader wearing skin-darkening makeup has emerged.

A video of Trudeau in blackface, first reported by Global News, came to light just hours after the prime minister apologized profusely for having indulged in what he acknowledged was a racist act of wearing brownface.

First, an 18-year-old photo surfaced of Trudeau dressed elaborately as Aladdin, his face and hands darkened by makeup during an "Arabian Nights"-themed party at the Vancouver private school where he once taught.

Now, Global News has published a video of a young Trudeau in blackface, showing him sticking out his tongue for the camera and raising his arms over his head.

A Liberal spokesperson confirmed its authenticity and said it was filmed in the early 1990s.

Trudeau has conceded it will take some doing to restore his image as a champion of diversity and tolerance.

"I'm asking Canadians to forgive me for what I did," he said Wednesday night during an emergency news conference aboard the Liberal campaign plane before taking off from Halifax for Winnipeg, where he was scheduled to have events Thursday.

"I shouldn't have done that. It was a dumb thing to do. I'm disappointed in myself. I'm pissed off at myself for having done it. I apologize for it."

He added that he didn't consider it a racist action at the time, "but now we know better.

"This is something unacceptable and it is racist."

He said he'll spend this morning talking to his three kids about "taking responsibility for mistakes we make, about living every day to try to be a better person." And he said he'll be spending time talking to visible minority Liberal MPs and candidates, some of whom he spoke with Wednesday evening.

Trudeau's foes will no doubt also be grappling with the fallout while they go about their more routine campaigning. They all responded Wednesday night, but now have to weigh whether to pile on Trudeau or adhere to the political maxim of never interfering when an opponent is the process of destroying themselves.

NDP Leader Jagmeet Singh, the first federal party leader from a visible minority, was scheduled to be in Hamilton. On Wednesday night, he responded more personally than politically, choking up as he talked about how people who have faced discrimination because of their skin colour will be hurt by the revelation about Trudeau's past activities.

Conservative Leader Andrew Scheer spoke only briefly after landing in Quebec, where he has events today in Saint-Hyacinthe, Granby and Sherbrooke, but signalled that he intends to give no quarter.

"Wearing brownface is an act of open mockery and racism," Scheer said. "It was just as racist in 2001 as it is in 2019. And what Canadians saw this evening is someone with a complete lack of judgment and integrity and someone who is not fit to govern this country."

Throughout the first week of the campaign, the Liberal war room has made hay with past comments and social media posts from Scheer and Conservative candidates, exposing what Liberals deem examples of intolerance toward minorities. Trudeau himself has called out Scheer for his refusal to march in gay Pride parades.

"He's the master of identity politics and the Libs just spent months accusing everyone of being white supremacists," he tweeted. "He definitely is the biggest hypocrite in the country."

Green Leader Elizabeth May, who is to speak to the British Columbia Assembly of First Nations today in Vancouver, said Trudeau "must apologize for the harm done and commit to learning and appreciating the requirement to model social justice leadership at all levels of government. In this matter he has failed."