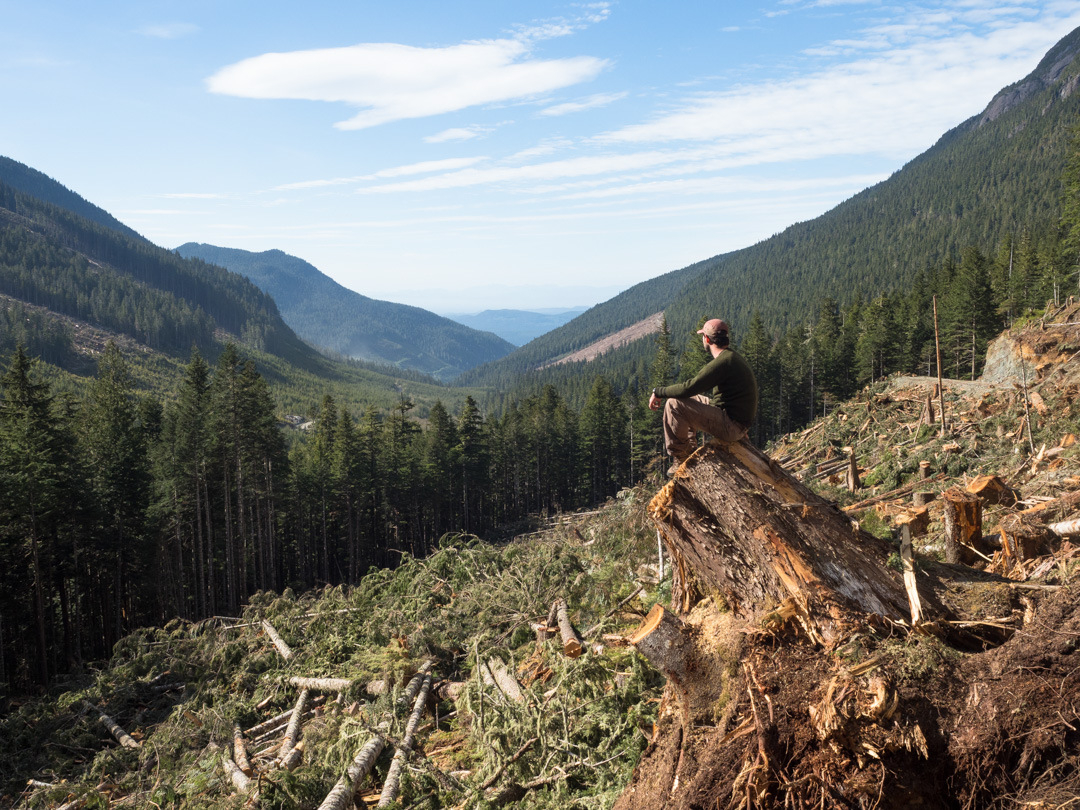 Don’t worry, we’ve got this.

That’s the gist of B.C. government MLAs’ responses when pressed on what the province of British Columbia is doing about the ongoing destruction of its last, globally rare old-growth temperate rainforest.

In the midst of the climate and species extinction emergencies, a growing number of concerned British Columbians are speaking out. In recent months, over 20,000 B.C. residents have sent messages to the provincial government demanding action to save ancient forests and improve forest management.

In June, hundreds visited MLA offices across the province, delivering this same message.

In response, many have received letters, emails and public responses from members of the legislative assembly claiming the government is taking conservation of old-growth forests on Vancouver Island and other parts of the province seriously.

So, do their claims hold up?

For decades, in the battle to save at least some of B.C.’s endangered old-growth forests, there’s been a severe gap between the pace of protection and the pace of destruction.

When the government talks a good game and acts slowly while allowing forests to be clear cut rapidly, we call it “Talk and Log.”

To see if we have another “Talk and Log” situation on our hands, Sierra Club BC took a close look at one government MLA’s response letter (with talking points likely supplied by the Ministry of Forests). We found a number of glaring problems and contradictions.

Read as we debunk some of these claims, then take what you learned and request a meeting with your MLA to insist your government do better.

Claim: Vancouver Island old-growth forests and their biodiversity are protected as the result of a “measured, thoughtful approach,” and between 13 per cent and 28 per cent of old growth of different types is set aside across the Island.

A range of percentages is meaningless without the context of maps and hectare numbers showing what forests are truly protected, and where.

In contrast, Sierra Club BC’s detailed maps and data show that today, only about 20 per cent of Vancouver Island’s original productive old-growth forests (big trees accessible and valuable to the logging industry) remain — and the majority of them are unprotected. The best science used in the Great Bear Rainforest shows we need to set aside 70 per cent of the natural old growth of all forest ecosystems to retain their integrity. Setting aside 30 per cent or less creates high risk for the web of life that depends on old growth.

Claim: 55 per cent of coastal old-growth forests and 520,000 hectares on Vancouver Island are already protected.

This spin would make Donald Trump proud. Say I have 10 apples and you take away eight of them. Of the two apples I have remaining, I eat one. In this case, I still have 50 per cent of my remaining apples, but only 10 per cent of the original number of apples.

Despite repeated requests from NGOs and media, the province has never been able to share a map showing where these 520,000 hectares of protected old growth on Vancouver Island are located. Sierra Club BC simply can’t find that many protected hectares when we map the state of the forest.

Claim: 307 big trees have been set aside by Western Forest Products and BCTS as "iconic" or legacy trees.

This sounds good. But on Vancouver Island alone, industry cuts down hundreds of thousands of big old-growth trees (about 10,000 hectares’ worth) every year, including record-sized ones like the ninth largest Douglas fir cut by BC Timber Sales (BCTS) near Port Alberni in 2018. A coherent policy protecting legacy trees would have to ensure all legacy trees of a certain size or age are protected with a proper buffer area, and not leave it to industry to select a few individual trees while ignoring how trees need to be surrounded by functioning forest in order to thrive.

Claim: A “significant reduction in the log harvest” would essentially put “all 24,000 jobs” in B.C.’s forestry sector “at risk.”

Where’s the evidence? We could create more forestry jobs with less destruction as other provinces are already doing. Ontario created 4.5 times as many jobs per cubic metre as B.C., where millions of cubic metres of raw timber are exported. The Canadian Centre for Policy Alternatives estimates B.C. could create thousands of jobs by phasing out raw log exports. We can create even more jobs through investment in value-added products. The government is also ignoring how clear cutting ancient rainforests threatens long-term tourism jobs and other sectors that depend on intact landscapes.

Claim: BC Timber Sales has plans to log 900 hectares of old growth this year, and the 8,800 hectares released by Sierra Club BC is “not accurate.”

This is extremely misleading. Sierra Club BC never said BCTS would log 8,800 hectares in one year. Our findings summarized its Multi-Year Development Plan, not just its plans for this year. And — more importantly — why should BCTS be allowed to log any old growth? Past experience from before BCTS was formed in 2003 shows that the forestry sector can exist without a publicly funded agency that destroys old growth. Instead, BCTS staff should be trained to restore provincial capacity for monitoring and enforcement of amended forestry regulation. Lastly, BCTS logging combined with private industrial logging amounts to more than 10,000 hectares of old growth destroyed every year (that’s even more than 8,800... just sayin’).

Claim: Ending old-growth logging would shut down the forest industry.

Why? Dozens of countries, including many in Europe, have destroyed all or almost all of their ancient forests and replaced them with younger forests, but they still have thriving forestry sectors. This MLA’s letter acknowledges that a transition to second-growth forestry will happen, but it “can’t happen overnight.” OK, but old growth is a non-renewable resource and old-growth logging will come to an end, one way or another. If we don’t act fast to set aside the last ancient forests, remaining intact areas will be too small and isolated to sustain species diversity, a diverse economy and environmental services like prevention of droughts and flooding — and it won’t prevent the inevitable loss of jobs that will happen when the old growth runs out. The province needs a transition plan to phase out old-growth logging with a just transition for forestry workers and their families. The fact that no plan exists should be a huge concern for everyone with a job in the woods. Defending the status quo is a recipe for disaster, ecologically and economically.

Claim: Offering incentives to companies to transition to second-growth logging would jeopardize Canada’s chances of winning the softwood lumber dispute.

The B.C. government’s understanding of forests ignores the value of the many different environmental services we lose when forests are clear cut. Other than a too-small stumpage fee, companies are not paying a dime to compensate for the loss of the incredible services trees freely provide us: wildlife habitat; pure air; clean water; carbon storage; prevention of droughts, flooding and erosion; a stable climate; ecosystem resilience; cultural values; human health; tourism opportunities and more. This sweet deal has been described by observers as a subsidy that industry is already getting. The province could take a first step in the right direction by making it more expensive to log old growth, instead of making it cheaper to log second growth. Far more important will be improved forestry regulation that truly protects the environmental services of forests.

Claim: Old growth is important to the province; the province is working on a “new old-growth strategy” and will have further discussions with stakeholders.

Unfortunately, despite several meetings with this government, Sierra Club BC has yet to find out what the province means by a “new old-growth strategy.” So far, it hasn’t developed new steps beyond miniscule initiatives started by the previous government that were designed to maintain business as usual.

In sum, right now we are faced with more “Talk and Log.”

There are potentially good things in the works, however. Sierra Club BC remains hopeful that this government is serious about bringing real improvements in 2020 to B.C.’s poor forestry law, the Forest and Range Practices Act (FRPA), including increased conservation for endangered old-growth forests. To this end, we and other organizations provided input the province requested this summer into changes that should be made, along with many concerned B.C. residents.

Unexpectedly, the province announced another process to gather feedback about old growth in coming months on July 17, just two days after the deadline for input on BC’s forestry regulation. This new process could help inform additional action beyond 2020, but it could also be used as a stalling tactic to prolong "Talk and Log." Both the improvements in the forestry law and the recommendations resulting from the new process are expected in the spring of 2020. But the old-growth crisis is too serious to postpone bold steps for endangered forests as part of the 2020 changes to FRPA.

It’s critical that British Columbians participate in these processes, as long as they are credible. We need to have our voices heard in order to counter the enormous pressure this government is getting from industry to maintain business as usual, but we have to take many additional steps.

Whether you’ve received a letter like the one discussed, or you’re reading about this problem for the first time, please request a meeting with your MLA. Tell them we’re in a global climate and biodiversity emergency, and “Talk and Log” is putting all of us, and our kids, at risk.

Two years into taking power, the government has now heard from tens of thousands of British Columbians who want action for endangered old-growth forest (action the NDP promised to take using lessons learned in the Great Bear Rainforest during the 2017 election campaign).

But this government has so far failed to take meaningful steps. Instead, it has misled people about the severity of the old-growth crisis and its negative impacts for plants, animals, cultural values, communities, watersheds, a stable climate, a diverse economy and long-term jobs.

The time to deliver meaningfully on a past promise and make transformational amendments to B.C.’s forestry law is quickly approaching in the spring of 2020. Let’s hold our elected officials accountable to their promise.

Why we need environmental rights

By Peter Wood | Opinion, Energy, Politics | September 20th 2019
Reports from the Race to a Safer World

By Rufo Quintavalle | Opinion, Politics, Culture | September 17th 2019
Reports from the Race to a Safer World

In Alberta, a shocking abuse of political power to protect the oil industry

I was looking for a lake on a

I was looking for a lake on a map App. I couldn’t find it so switched to satellite view. I live in Port Alberni and was horrified to see the huge scalped areas. Areas close to town weren’t too awful but once you left the area easily accessed it was as if some huge plague had hit the trees. Enormous areas of land appeared nude. These companies don’t want to increase employment. They want the biggest profit as fast as possible and the consequences be damned. A disgusting show of greed. Promises made by any government are ridiculous.