Honour for the late Leonard Cohen 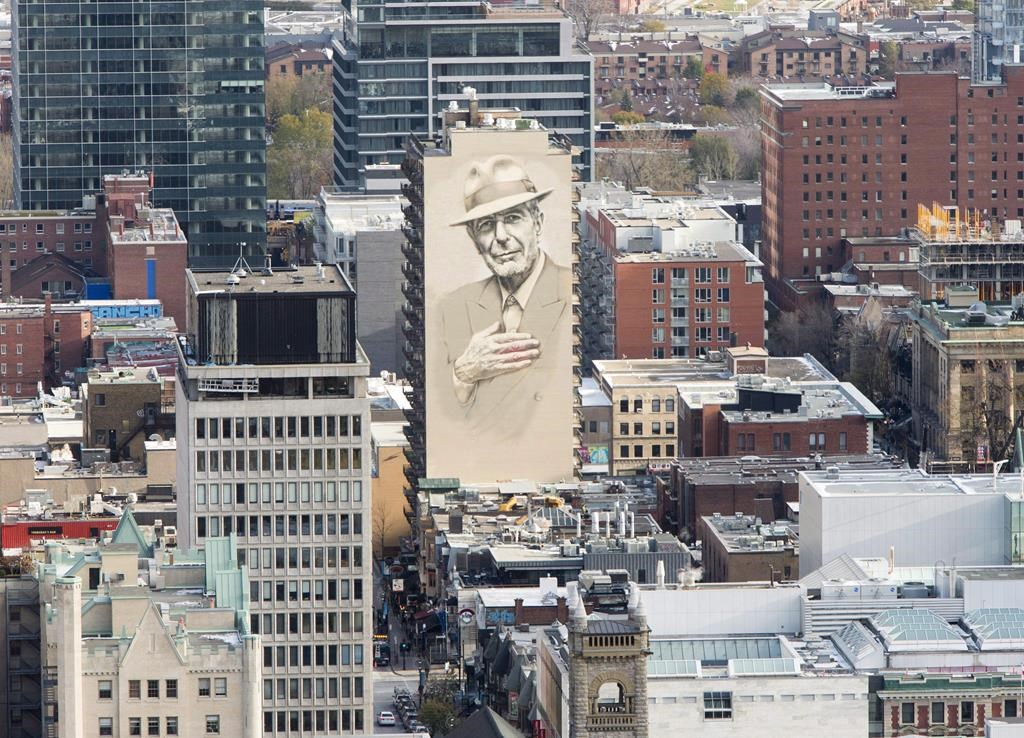 A mural in honour of the late poet/songwriter Leonard Cohen is seen downtown in Montreal on Nov. 10, 2017. File photo by The Canadian Press/Ryan Remiorz
Previous story
Next story

Canada Post has honoured the late, legendary singer Leonard Cohen with a set of commemorative stamps that will be released to the public on Saturday, which would have been the icon's 85th birthday.

The set of three stamps, unveiled Friday evening at an event at the Montreal Museum of Fine Arts, are distinct designs to show three periods of Cohen's illustrious music career.

The stamps depict the singer at three different points — first crouched, then standing and finally sitting — with the name "Cohen" in large letters on each, which Montreal-based design firm Paprika said symbolizes "the scope of his work but also the man himself, who was larger than life." Given the posthumous nature of the series, designers opted for black and white images.

"We wanted to create a sequence that was coherent as well as timeless, representing the whole career of Leonard Cohen, so we decided to take three separate moments of his career," said Raymond Lanctot, an art director and designer at Paprika.

The stamp designs were a closely guarded secret ahead of Friday's event, which took place in the shadow a massive Cohen mural on Crescent Street that has become a highlight of the Montreal skyline.

Lanctot said designers kept just one thing in mind as they went about the process of designing the stamps.

"It was really just a matter of remembering who he was," he said.

Canada Post said it will produce four million stamps, a number it believes will be sufficient for fans and collectors worldwide. They will be available for two years or as long supplies last.

"I think we're going to see a lot of this on mail which is great, I think Leonard would have been happy with that," said Jim Phillips, director of stamp services with Canada Post. "But we're going to see them in fans' collections — they're not going to want to touch them — and stamp collectors too."

Canada Post, which has been producing stamps since 1851, has honoured several iconic figures and institutions. Late pianist Oscar Peterson was honoured with a stamp to mark his 80th birthday, while others who have been honoured include race car driver Gilles Villeneuve and longtime Montreal Canadiens star Jean Beliveau.

But the Cohen stamps might be the most important ever produced, given Cohen's larger-than-life status and international following.

"This particular one of Leonard Cohen is one of the most significant stamps we've ever issued," Phillips said. "We're so honoured and thrilled at having the responsibility to do this ... in a proper, classy, professional way that would have made Leonard and his family extremely happy and proud."

Phillips said while the stamp got the green light from Canada Post's stamp advisory committee nearly two years ago, the Crown corporation worked closely with the singer's family and estate to ensure the stamps will be a fitting tribute.

Cohen's longtime agent and manager of his estate has been working with Canada Post for over two years to ensure they got it right.

"Leonard was always deeply appreciative of his Canadian heritage, and would have been moved by this honour from Canada Post," said Robert Kory, Cohen's manager, estate trustee and friend.

Canada Post is hosting a special event at a downtown Montreal post office on Saturday to give fans and philatelists a first crack at the stamps and associated items, and celebrate the singer's birthday.

This report by The Canadian Press was first published Sept. 20, 2019.