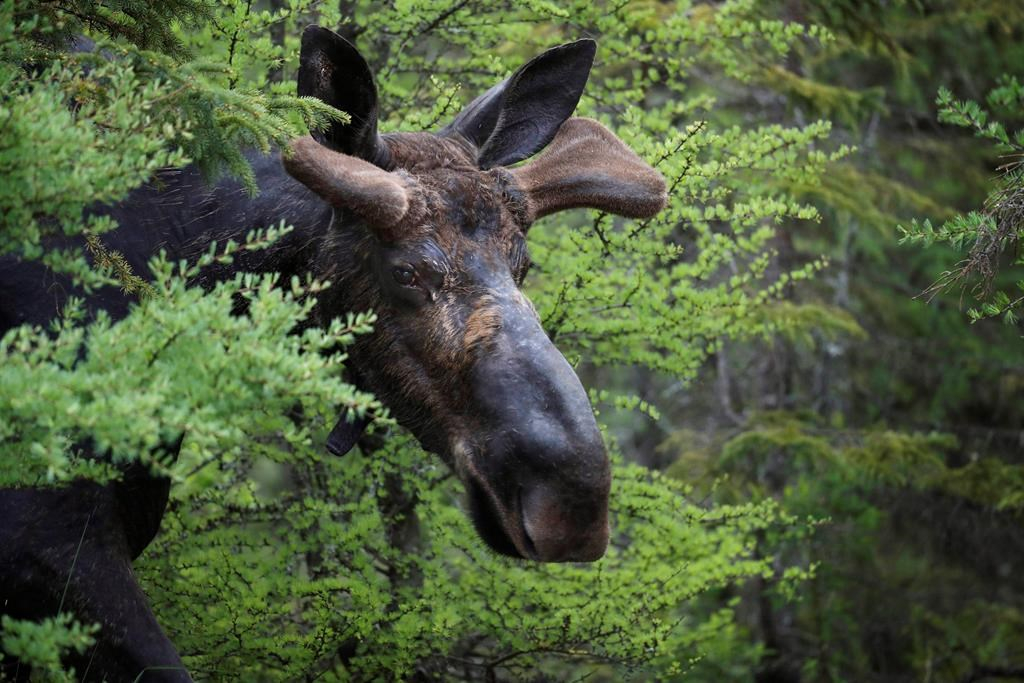 In this May 31, 2018 file photo, a bull moose walks through the Umbagog National Wildlife Refuge in Wentworth's Location, N.H. File photo by The Associated Press/Robert F. Bukaty
Previous story
Next story

In what is being described as a first in Nova Scotia, conservation groups are asking the courts to order the province to respect the provisions of its Endangered Species Act.

The Federation of Nova Scotia Naturalists, Blomidon Naturalists Society, the Halifax Field Naturalists and wildlife biologist Bob Bancroft were in Nova Scotia Supreme Court Monday, where they argued that Lands and Forestry Minister Iain Rankin has failed to meet requirements under the act.

Their lawyer, James Simpson, said the lack of action represents a "systemic failure" within the department to meet statutory duties, including requirements to devise and implement recovery plans for species at risk, create recovery teams and identify core habitats.

Simpson noted that 71 species were listed by regulation under the act as of 2017, with 33 listed as endangered.

"On the whole, species at risk appear to be near the bottom of the priority list for the Department of Lands and Forestry," he told Justice Christa Brothers.

"These failures are not isolated incidences, but rather they demonstrate a systemic failure within Lands and Forestry to meet statutory duties regarding species at risk, and these failures have occurred over a number of years."

In the case of the mainland moose, Simpson said the department released a recovery plan in 2007 that was based on data contained in a 2003 study. That showed the number of animals in Nova Scotia at between 1,000 and 1,200.

He said the act requires the minister to review a recovery plan every five years.

"How many mainland moose remain surviving today? We don't know ... because the minister has failed to conduct a review of the 2007 recovery plan."

Simpson said that's still the case, even though the minister formed a new recovery team for moose in August.

"This is extremely concerning given the dire straits facing moose back in 2003," he said.

He also told the court that the call to action by the applicants follows a 2012 letter to the minister by the East Coast Environmental Law Association and Dalhousie University law students, a 2015 report by the association, a 2016 audit by the province's auditor general and a 2018 study on forestry practices by Bill Lahey, the president of the University of King's College.

Simpson said the applicants believe the language in the act, with its use of the word "shall", creates an imperative and they want the court to force the department to enforce the existing law.

They are also asking the court to set deadlines for specific provincial actions to protect species at risk and to ensure the deadlines are respected.

Jeremy Smith, the lawyer for the province, immediately questioned the standing of the groups, submitting to Brothers that they are not "public interest litigants" and therefore don't have the legal right to seek a court order.

The judge quickly questioned his assertion.

Smith, who didn't finish his submission Monday, also told the court the province believes the language in the act amounts to a directive and is not mandatory.

He said the case raises issues of discretion and policy that "involves intertwined legal and factual issues."

"For these reasons I conclude that the appropriate standard of review is reasonableness," Smith said.

As an example, he said it would be unreasonable for the minister to set out core habitat for the black ash without the appropriate scientific data available to help him make a decision.

Outside court, Bancroft, who was on the department's recovery team for the mainland moose between 2004 and 2012, said the court's decision is crucial because of what's happening in the province's forests.

"The government, in my opinion, are actually listening to the industries who are out there for profit," he said. "I think we've got to turn this around."

The court review is scheduled to resume Oct. 1.