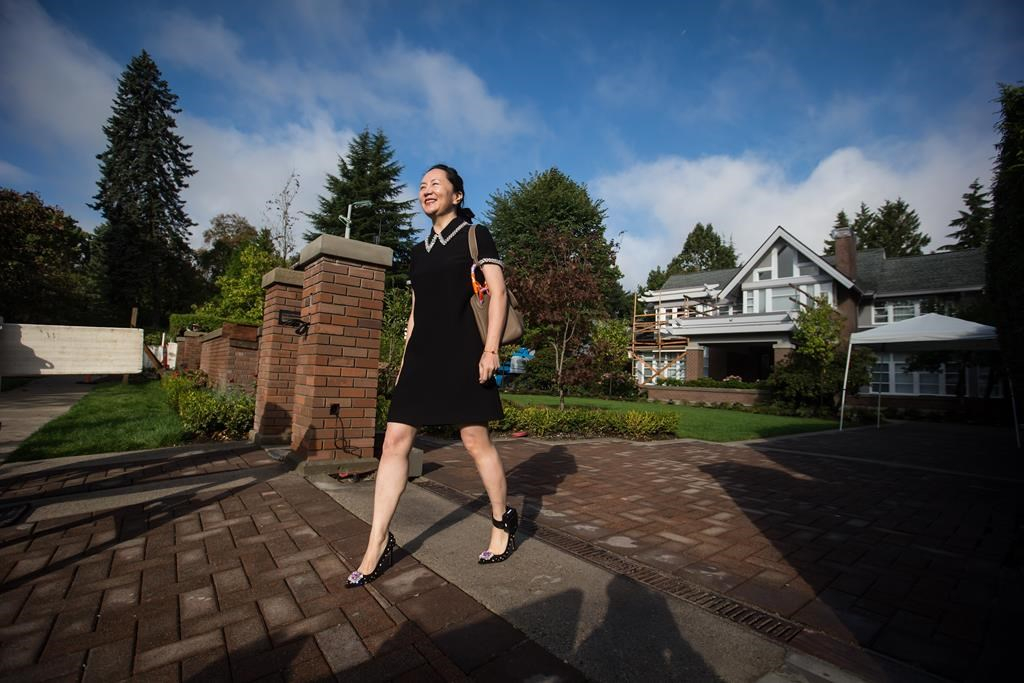 A lawyer for Huawei executive Meng Wanzhou denies her defence team is on a "fishing expedition" for documents to support its case.

Scott Fenton told B.C. Supreme Court on Tuesday that the team is not relying on conjecture, guess work or wishful thinking when it asks the court to compel the Attorney General of Canada to release further documents related to Meng's arrest at Vancouver's airport last December.

"We are not on a proverbial fishing expedition in any way," Fenton said, adding that the defence will offer a more narrow and specific request for access Wednesday.

Meng's legal team is arguing for further disclosure in an ongoing hearing ahead of Meng's extradition trial, which begins in January.

Fenton said the defence must convince Justice Heather Holmes that there is an "air of reality" to their allegations, including that Meng was the subject of an abuse of process, in order to compel further disclosure from the Crown.

Canada's attorney general has not yet presented its response in court but documents show it will argue that officials followed the law when they detained the top Chinese tech executive and the defence has no proof to substantiate its "conspiracy theory" that she was illegally arrested.

Meng was arrested Dec. 1, 2018, at the request of the United States, which is seeking her extradition on fraud charges related to violation of sanctions against Iran. Both Meng and Chinese tech giant Huawei have denied any wrongdoing and none of the allegations have been tested in court.

The arrest of Meng, who is the chief financial officer of Huawei and the daughter of the company's founder, sparked a diplomatic crisis between Canada and China. She is free on bail and living in Vancouver.

Another defence lawyer, Richard Peck, told the court Tuesday that there was nothing "routine" about the way Meng was questioned by border officials before she was read her rights and informed of her arrest at the airport.

He pointed to a solemn declaration sworn by a border official that says Meng repeatedly asked why she was taken for secondary screening and that he questioned Meng about her business activity in Iran.

Peck also presented video showing that neither he nor another border official standing by took notes of the conversation, even though the second official had "meticulously" taken notes during other portions of Meng's detention in the screening area.

Part of the defence team's argument alleges that officials intentionally failed to properly document their process.

The deputy minister of justice and Prime Minister Justin Trudeau were also briefed on the arrest, which is unusual, Peck noted.

The defence also said that officials originally planned to board Meng's plane and arrest her before she disembarked, but the plan changed.

Instead, it said two RCMP officers watched as border officials met Meng on the jetway, collected her phones in a specialized bag that blocks remote wiping, then escorted her to a secondary screening area where she was held for about three hours before her arrest.

Handwritten notes by RCMP officers outline the first plan was communicated after a meeting Nov. 30 at the airport with RCMP and CBSA officials. But there's a gap in documentation of why the plan changed, Fenton said.

It's an example that raises "an inference that there were further communications in relation to the arrest plan that are relevant to why they changed the next morning," he said.

This report from The Canadian Press was first published on Sept. 24, 2019.

Freeland lands meeting with Chinese counterpart to talk about detainees