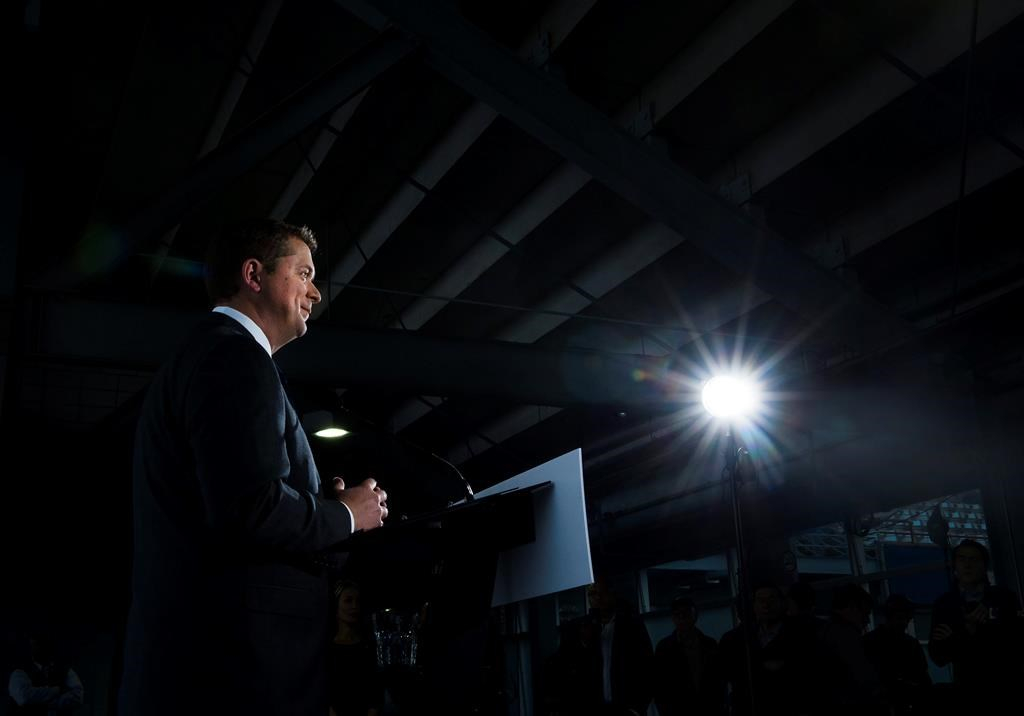 Scheer promoted the Conservatives' pledge to build a national energy corridor during a stop in Edmonton, where he took the stage with an old friend: Alberta Premier Jason Kenney.

Scheer, who also planned to visit Saskatoon on Saturday, urged cheering supporters to help his party recapture ridings in Alberta that the party lost in the 2015 election. Four years ago, the Liberals won four seats from the Tories in Calgary and Edmonton. The New Democrats have also had a beachhead in one Edmonton riding.

"I need your help, I need you to go door to door," Scheer said after being introduced by Kenney, a former minister in Stephen Harper's Conservative government.

Kenney, who drove Scheer to the event in a blue pickup, told the crowd that his pal will be a prime minister "we will never have to be embarrassed about."

The Conservatives have been trying to sell voters on their pledge to construct a cross-Canada energy corridor to transport oil, gas, hydroelectricity and telecommunications. Scheer insisted it would improve certainty for investors, address environmental and social concerns up front, and deliver economic benefits for all Canadians.

He didn't provide a cost or a timeline for the project, which would likely face tough negotiations with Indigenous Peoples and the provinces — especially Quebec.

Singh, meanwhile, campaigned for a fifth consecutive day in British Columbia, where the NDP won 14 seats in 2015. He's running for re-election in the Vancouver-area riding of Burnaby South.

Singh made an announcement aboard a ferry en route from Victoria on Vancouver Island, a critical battleground where the NDP is trying to hold off the Greens.

An NDP government, Singh said, would provide an additional $30 million of federal funding towards British Columbia's ferry system to help provide more services and to lower costs for commuters. Singh has been making promises tailored to B.C., in areas such as housing affordability and coastline protection.

"We know that B.C. is also a province that also feels neglected — being on the West Coast a lot of times people feel like they're ignored and I want to make sure people in B.C. know that I've got their back," he said when asked about all the attention he's been paying to the province.

"We're running a national campaign and I'm looking forward to being in every part of Canada. I have the honour of being a national leader and it's my job to represent all of Canada."

Singh, however, later said he would "try" to visit every part of Canada during the campaign. He was asked by a reporter to clarify whether that meant he might not make stops in Alberta, Prince Edward Island and in every province.

"We will try," Singh repeated in French following an event in Burnaby with poet and author Rupi Kaur.

"It's an election, it's difficult to anticipate everything that will happen. But my commitment is to be, as much as possible, everywhere in Canada."

Since the start of the campaign, the NDP leader has paid considerable attention to B.C. and Ontario. Singh has yet to campaign in Alberta, Saskatchewan, Newfoundland and Labrador or P.E.I.

He visited New Brunswick last Monday for the first time since winning the party's leadership two years ago. He apologized for not getting there sooner.

The NDP is trying to keep its spending under control following years of weak fundraising and deep debt from the 2015 election. Second-quarter fundraising results released by Elections Canada showed the NDP raised just $1.43 million during those three months — slightly less than the Greens and much less than the Conservatives and Liberals.

Liberal Leader Justin Trudeau was off the campaign trail Saturday, pausing in Ottawa for the day before an expected platform-revealing event in Mississauga, Ont., on Sunday. Green Leader Elizabeth May campaigned on Vancouver Island and People's Party Leader Maxime Bernier was scheduled to attend a fundraiser in his Quebec riding of Beauce.

In Edmonton, Scheer was asked about his biography on the Conservative website, which says he worked in the private sector as an insurance broker before entering public life.

A report published Saturday by the Globe and Mail said it found no record of Scheer ever receiving the licence required by law to work as an insurance agent or a broker in his home province of Saskatchewan.

"I did receive my accreditation under the Canadian accredited insurance broker program and ... I left the insurance office before the licensing process was finalized," he said.

Scheer also defended his decision to appear at a rally with Kenney. The Alberta premier has been a vocal cheerleader for the province's oil sector, which is deeply unpopular in Quebec due to Quebecers' environmental concerns.

The Conservatives are hoping to pick up more seats in Quebec.

"I believe that Quebecers know that it's better to have Canadian oil instead of oil that comes from the United States," Scheer said in French, repeating an explanation he's given frequently.

"I don't want to continue a situation where the money of Quebec consumers goes to the economy of Donald Trump. It makes no sense. I made my choice, I prefer our own oil."

Later in the day, Scheer said that nothing drives him "more crazy" than when people protest Canadian energy being taken out of the ground with what he called the highest environmental standards. He argued profits from the sector pay for roads, bridges and hospitals.

"I see people chaining themselves to trees or laying down in front of bulldozers, but I don't see them lining up and down the St. Lawrence (River) to protest tanker after tanker of foreign oil coming into Canadian markets."

This report by The Canadian Press was first published Sept. 28, 2019.