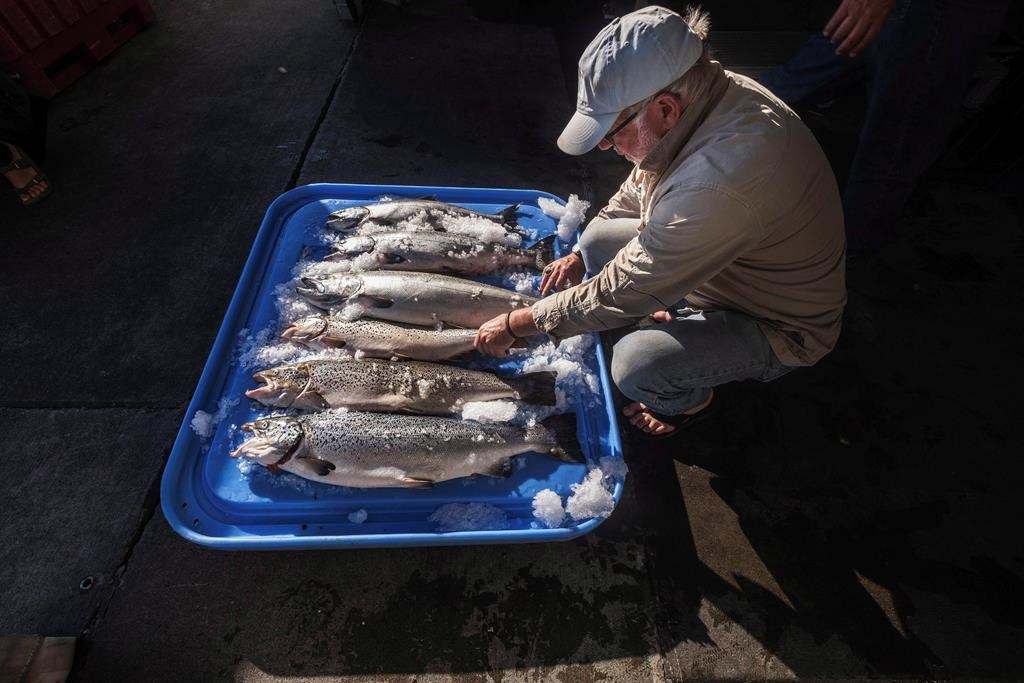 Northern Harvest Sea Farms, owned by the Norwegian company Mowi, attributed the deaths to an extended period of high water temperatures, between 17 and 21 degrees Celsius.

Spokesman Jason Card said an undetermined number of salmon suffocated from lack of oxygen as they clustered together in an attempt to reach cooler waters at the operation on Newfoundland's south coast.

An exact number of dead salmon will be reported in the company's annual report, but Card could not say when the count would be complete, given the time-consuming work of gathering the dead fish from the sizable pens.

Escalating public concern over the news last week stemmed from conflicting reports about the number of dead fish and their cause of death. There were also questions about why the deaths were detected Sept. 2, according to the company, but not shared publicly until Sept. 23., after the FFAW-Unifor union issued a statement to its members.

Card said the company intends to disclose such incidents more quickly in the future and added that the company is preparing to upgrade its facilities to cope with the reality of warming waters.

The incident was reported shortly after news that about 1,000 farmed salmon escaped from a Cooke Aquaculture site in New Brunswick. Neville Crabbe, spokesman for the Atlantic Salmon Federation, said the incidents highlight the environmental and transparency risks that come with aquaculture, particularly around open net pen salmon farming.

Many environmentalists consider open net farming to be a riskier method of aquaculture because there is free exchange between the outer environment and the farm, increasing risk of contamination from waste, disease and potential escapes.

Crabbe said changes to aquaculture policy announced in Newfoundland and Labrador last week and a review of New Brunswick's Aquaculture Act are good steps towards a more sustainable industry.

But with the ongoing development of a federal Aquaculture Act, announced by federal Fisheries Minister Jonathan Wilkinson last December, Crabbe said a "jurisdictional tug of war" over regulations has created more confusion around what Atlantic Canada's growing aquaculture sector will look like.

"I think right now it's fair to say governance of the entire industry is somewhat in flux," he said.

"While there's a push to rapidly expand, I think there's also some pullback now from within government to say 'Whoa guys, let's slow down here.'"

In the middle of the debate over the Northern Harvest incident, St. John's last week hosted a conference for the aquaculture industry. The province released updated policies and procedures, including tighter public reporting requirements and an obligation for fish operators to pay a security bond.

But Premier Dwight Ball also announced funding for an initiative to drive recruitment in the industry, which represents about 16 per cent of the province's seafood industry, touting the industry's employment potential as part of his government's growth strategy.

Tension between federal and provincial wishes for aquaculture in Canada has popped up as an election issue, and one item in the federal Liberal election platform released Sunday has sparked concern within the industry. The party says it will develop a plan to move British Columbia from open net salmon farming to closed containment by 2025.

A joint statement by the Canadian Aquaculture Industry Alliance and regional counterparts in B.C., Ontario, Nova Scotia, P.E.I. and Newfoundland and Labrador called the proposal "highly irresponsible" with potential "far-reaching negative consequences for Canadian jobs and the environment."

Timothy Kennedy, president of the organization, said in a statement that the policy was "not grounded in science" and would "threaten good middle-class jobs across Canada."

Aquaculture represents 20 per cent of Canada's seafood production, with salmon and other fin fish making up almost 80 per cent of output. About half of farmed fish come from British Columbia and most of the rest from the Atlantic provinces, according to federal government statistics.

The number of Atlantic Canadian fish farms is growing, with a flurry of funding announcements for new project sites and research coming from federal and provincial governments over the last year.

During this period of growth, one federal watchdog warned in a report last year that Fisheries and Oceans Canada had not balanced the industry's risks with its mandate to protect wild fish.

In a 2018 report, Julie Gelfand, federal environment commissioner at the time, called for more detailed monitoring and study of the industry, pointing to the under-studied effect of pesticide use and the risk of salmon escapes. These escapes can result in genetic defects that threaten wild fish populations.

A study of a notorious 2013 escape of approximately 20,000 salmon from a Newfoundland pen confirmed fears about the risks these escapees pose to wild populations. Federal fisheries scientists reported "widespread evidence of hybridization" after the 2013 escape, finding offspring of wild and farmed fish in 17 out of 18 surveyed rivers, according to a report published in September 2018 in the journal Communication Biology.

This report by the Canadian Press was first published Oct. 1, 2019