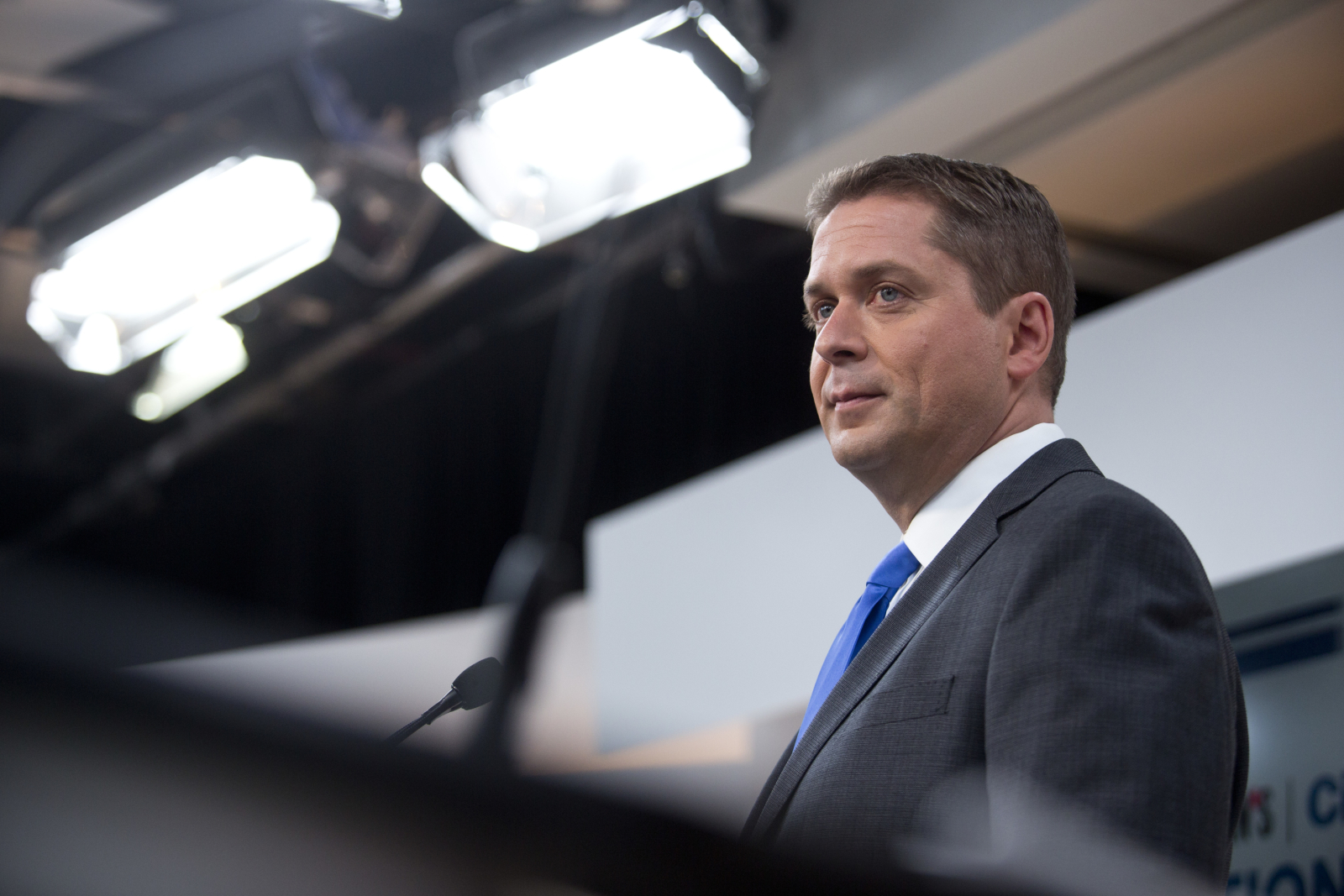 It was the first time Liberal Leader Justin Trudeau faced his rivals directly in this federal election campaign, but Conservative Leader Andrew Scheer spent a great deal of time in the hot seat during the first French-language debate.

That gave Yves-Francois Blanchet, leader of the Bloc Quebecois, the chance to press the Conservative leader to elaborate on his personal views.

Scheer said it is normal for Canadians to have different perspectives, but that he would oppose any measure to reopen the debate.

"It's the Liberals who want to import these divisions from other countries," Scheer said Wednesday night onstage in Montreal, where the leaders all appealed to voters in a province that could hold the key to their electoral fortunes in the Oct. 21 vote. "I have always been clear. As a government, we will not reopen this debate."

But his political rivals pushed him to go further

"Setting politics aside," Trudeau said, "Do you believe as a leader ... as a father, as a husband, that women have the right to choose?"

"It is not acceptable to have a man talk about the rights of women," said Singh.

Scheer was pressured to clarify his stance on abortion last summer after it emerged that his Quebec lieutenant, MP Alain Rayes, had told candidates in the province that backbench MPs would not be allowed to bring forward any bills or motions on the issue.

That goes against party policy and created confusion until Scheer, a practising Catholic who has voted in favour of restricting abortion rights in the past, said he would oppose any attempt to reopen the debate should he become prime minister.

The conversation about the separation of church and state continued as the leaders discussed the controversial Quebec secularism law, known as Bill 21, that bans some public-sector employees from wearing religious symbols in the workplace.

Singh, who wears a turban as an expression of his Sikh faith, sought to counter any suggestion that his personal religion would get in the way of his strong support for secularism, in less restrictive form, as a public value.

"I am for the separation between church and state," said Singh, adding that he supports the rights to abortion, same-sex marriage and medical assistance in dying. "I will defend these rights with all my strength."

Blanchet was alone in defending the Quebec law, although Trudeau is the only federal leader who has left the door open, however slightly, to challenging it.

This debate, which centred around issues important in Quebec, was the first involving the Bloc Quebecois leader.

He made sure to go after all three of the leaders of Canada-wide parties, including needling Scheer and Singh about their errors in French, as neither was debating in his first language.

In exchange, all of the other leaders noted at various times that the Bloc can never implement its policies because it could never form government.

Still, Blanchet took the conversation in some unexpected directions.

When the SNC-Lavalin affair came up, for example, it was Scheer who found himself defending his position.

The federal ethics watchdog released an explosive report this summer that concluded Trudeau had contravened the Conflict of Interest Act when he tried to pressure former attorney general Jody Wilson-Raybould into intervening to head off criminal proceedings against the Montreal engineering giant.

Trudeau has said his only motivation pushing for a remediation agreement for SNC-Lavalin was a desire to protect jobs — including many in Quebec.

Blanchet accused Scheer of wanting to "scrap" SNC-Lavalin, which had the Conservative leader on the defensive as he argued the Liberals were wrong in thinking the criminal proceedings threatened Canadian jobs.

The debate also became heated during a discussion about the fight against climate change, where Pierre Bruneau, the news anchor moderating the debate, noted Trudeau had portrayed himself as a champion of the environment but then bought a pipeline.

Last year, the Liberal government bought the Trans Mountain pipeline project from Kinder Morgan for $4.5 billion, after political opposition to expanding the existing pipeline between Alberta and the B.C. coast gave the company and its investors cold feet.

Scheer, who is in favour of building pipelines and has vowed to repeal the federal carbon tax the Liberals brought in for provinces that don't have equivalent measures of their own, tried to undercut the Trudeau record on the environment in a different way.

Noting the Liberal leader has two campaign planes, Scheer charged: "You are a fake environmentalist."

Trudeau tried to interrupt to say that his campaign had purchased carbon offsets for his travel and the Conservatives had not.

Singh, meanwhile, took Scheer to task over his promise to create a national energy corridor to transport oil, gas, hydroelectricity and telecommunications from one coast to the other, which could be a tough sell in Quebec.

Singh accused Scheer of wanting to impose a pipeline on Quebec. Blanchet also went after Scheer by demanding to know how many more years he thinks Canada will need to extract and export fossil fuels.

Trudeau has been trying to convince Canadians that voting for Scheer would be returning to the days of former prime minister Stephen Harper, whose Conservative government was unpopular in Quebec.

At one point, that allowed Scheer to make another joke at Trudeau's expense, saying he believes Quebecers missed Harper during Trudeau's trip to India.

None of the federal parties have seen much movement — either gains or losses — in opinion polls despite weeks of campaigning, which some experts attribute variously to a degree of comfort with the status quo as well as a rise in public disillusionment and strategic voting.

The Liberals and Conservatives remain locked in a fight for first place, hovering around 33 per cent support nationally, but with the Liberals apparently having a small edge because so much Conservative support is concentrated in the Prairie provinces.

A strong Liberal showing in Quebec, where polls show them with a small but consequential lead, could sustain the Liberals in power; a strong Conservative showing could sink them.

Trudeau was able to ride a wave of unhappiness with a decade of Conservative rule under Stephen Harper to power in 2015 in an election campaign that saw the NDP start in the lead before giving way to the Tories, until voters rallied behind the Liberals to give them the win.

Four years later, Trudeau's record in office — including his broken promise on electoral reform and decision to purchase the Trans Mountain pipeline — has turned off many of those same voters, especially progressives, who cast their ballots for the Liberals.

Despite that disappointment with Trudeau, Christian Bourque, executive vice-president of polling firm Leger, said there does not seem to be the same overwhelming drive for change that existed in 2015, when a majority of Canadians were ready for a new direction.

"So there's this sort of comfort with the current government, even though some may be disappointed with the leader," Bourque said. "So there's no urge for that amount of change. And at the same time, there's nobody convincing them of the need for change on the other side."

Of course, even though it is past the halfway mark, the election campaign is far from over and Wednesday's French-language debate was seen as an key opportunity for the four participating leaders to talk directly to Quebecers, in particular, and start gaining some momentum.

—With files from Joan Bryden