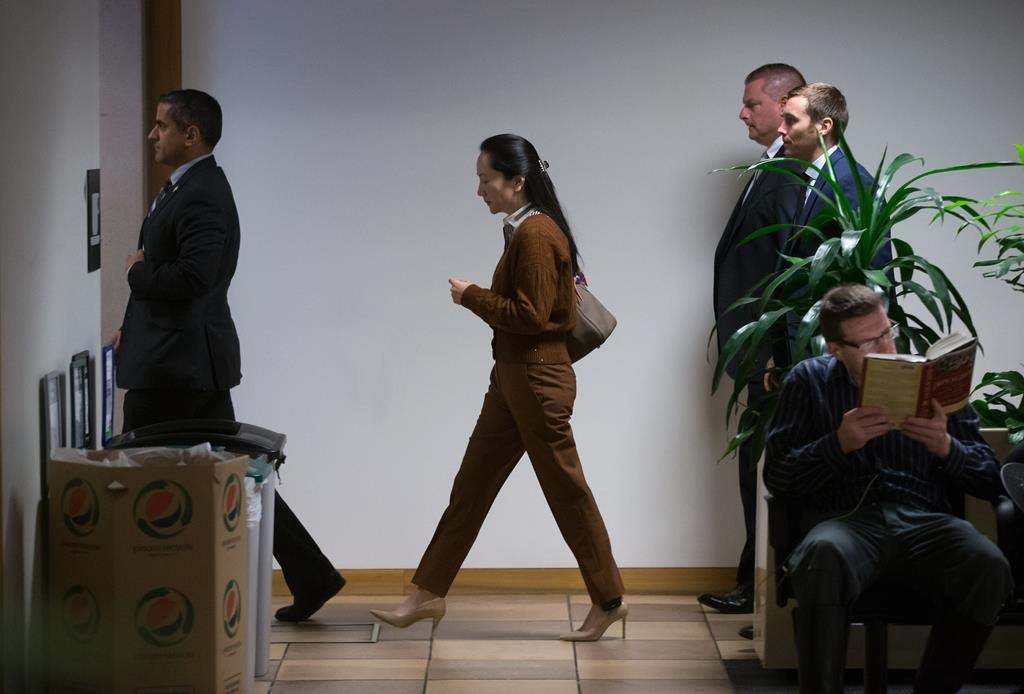 A lawyer for Huawei Technologies executive Meng Wanzhou says the RCMP illegally passed on serial numbers and other crucial details of her electronic devices to the Federal Bureau of Investigation, but the Crown denies the allegation.

Scott Fenton said Mounties provided information that enables U.S. authorities to find out calls made and received, phone numbers, time and duration of calls and the physical location of cell towers where calls were connected.

"This is a very serious matter," Fenton told a British Columbia Supreme Court judge on Thursday.

"The provision of this technical information is a gateway to U.S. law enforcement taking other investigative steps ... to get other information to use against Ms. Meng."

Meng's lawyers are in court seeking documents that they believe would prove allegations that American and Canadian officials conspired to conduct a "covert criminal investigation" at Vancouver's airport.

The U.S. is seeking her extradition on fraud charges linked to alleged violations of sanctions against Iran, which Meng and Huawei deny. She was arrested during a stopover at the airport on Dec. 1, 2018.

A lawyer for the Canadian government told the judge it's simply not true that RCMP forwarded details about Meng's phones, laptop, tablet or any other devices to the FBI.

"My friend says it's a very serious allegation and we believe it's not a fact," said Robert Frater.

Fenton replied that his assertion was based on an RCMP officer's notes, which say a staff sergeant emailed an FBI liaison the devices' serial numbers, SIM card numbers and international mobile equipment identity numbers. The identity numbers allow U.S. authorities to learn significant information about call history, the defence said.

After a break, Frater produced two emails from the staff sergeant in which he said he did not provide the information to the FBI. He also proposed that the judge direct the Crown to produce documents from five RCMP officers on the topic.

However, the defence insisted that the new evidence from the staff sergeant was merely "hearsay."

"We have grave concerns that this information is not correct," Fenton said.

Justice Heather Holmes directed the Crown to obtain affidavits from the five officers by next Wednesday. The defence will then have until Oct. 16 to respond and decide whether it wants to apply to cross-examine the officers.

The judge reserved her decision on the defence's overall application for disclosure.

While the devices were ultimately not passed on to the FBI, Fenton told the court that the original plan was for the U.S. agency to acquire them.

Following a morning meeting of RCMP and CBSA officers on Dec. 1, a Mountie wrote in her notes that the border guards would obtain Meng's phones "as per FBI request."

The Crown has said a forensic examination showed that neither the CBSA nor the RCMP searched the devices. But Fenton said the exam did show that on Dec. 4, several devices were turned on and at least one was connected to internet.

That was the same day that the RCMP officer's notes said the device details were passed on to the FBI, and another officer wrote that he had photographed the devices and removed the SIM cards, Fenton said.

The RCMP violated the Extradition Act when it provided this information to the FBI, he argued.

The FBI has since dropped its request for the devices, but Fenton described that decision as "an effort at damage control" and added the agency may have already gleaned significant information from the items.

"A reasonable inference may be made that they don't want the devices anymore because they don't need them," he said.

Fenton also criticized the Crown for its recent admission that border guards "mistakenly" provided Meng's passcodes to the RCMP.

The defence argues that a plan was hatched during the morning meeting on Dec. 1 to have border guards interrogate Meng before the RCMP executed the provisional arrest warrant, robbing her of her right to a lawyer or silence.

The court heard CBSA seized her devices and wrote down the passcodes on a piece of paper, both of which they passed to the RCMP at the time of her arrest.

Fenton questioned why handing over the passcodes was being described as a mistake, but not providing the devices. He argued that none of what unfolded was an accident.

"To describe this as an error is to mischaracterize the seriousness of all of the conduct," he said. "All of the conduct was purposeful and taken in furtherance of the plan that was set that morning."

He also argued that a border guard's interview of Meng was inappropriate and crossed into the realm of evidence-gathering. The officer didn't tell Meng she was facing an arrest warrant but asked her about Huawei's business in Iran.

In addition to seeking document disclosure, the defence has also suggested a stay of proceedings. The Crown has said there's no evidence that would justify such a draconian measure, but Fenton disagreed.

"You have powerful evidence pointing to an air of reality that the remedy for these cumulative abuses of law, that also involve multiple serious violations of Ms. Meng's constitutional rights, would justify a stay of proceedings," he said.

The arrest of Meng, who is Huawei's chief financial officer and the daughter of its founder Ren Zhengfei, sparked a diplomatic crisis between Canada and China. Her extradition trial is scheduled to begin in January.