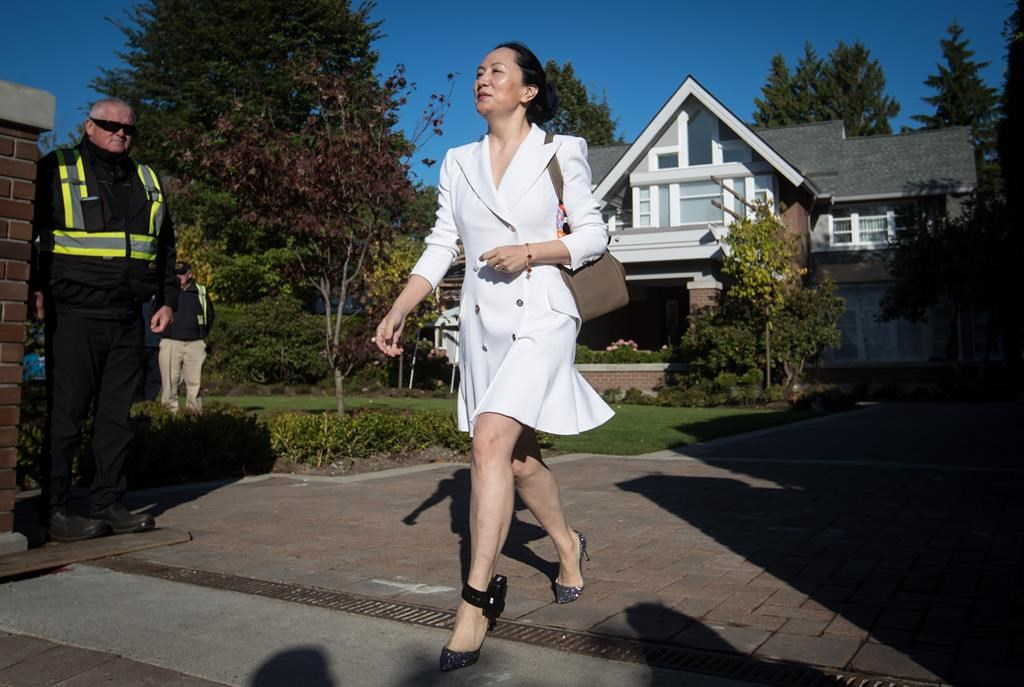 The actions of Canadian officials during the arrest of Huawei Technologies executive Meng Wanzhou at Vancouver's airport were "not at all sinister" and followed their legal obligations, a Crown prosecutor says.

Robert Frater, a lawyer representing the Attorney General of Canada, said the defence has alleged that Canadian and United States officials conspired to conduct a covert criminal investigation at the airport on Dec. 1, 2018.

Border officers held Meng for three hours before the RCMP executed a provisional arrest warrant at the request of the U.S., which is seeking her extradition on fraud charges linked to the alleged violation of sanctions against Iran.

There is "nothing to" the defence allegations that the Mounties and the Canada Border Services agency ignored their legal obligation to execute the arrest warrant immediately or covered up a secret illegal investigation, Frater told a B.C. Supreme Court judge on Monday.

Meng, who is the Chinese tech giant's chief financial officer and the daughter of its founder, denies any wrongdoing. Her lawyers are in B.C. Supreme Court seeking further documents ahead of her extradition trial in January.

The defence is requesting documents that it believes will prove its allegations of an unlawful arrest and coverup. But the Crown argued that it has already produced voluminous disclosure, including officers' notes and surveillance video.

Frater said Meng's questioning at the airport was hardly "covert," since various activities were videotaped, audio taped and subject to notes, and if it was an "investigation" it produced paltry results.

It produced two statements from Meng, neither of which remotely prejudiced her rights or demonstrated any impropriety by officers involved, he said.

Frater added her electronic devices and passcodes were legally seized, but the items were not searched by the RCMP or border officers. Since the Federal Bureau of Investigation has said it doesn't want the devices, Canada has been trying for two months to return them to Meng, Frater said.

The defence has claimed that the seizure of electronic devices was a U.S. priority that Canada accepted "without question."

However, Frater said an officer's notes merely state that evidence should be preserved as there will be a request from the FBI. All these notes establish is that there was co-operation between Canadian and U.S. authorities, because by definition extradition is a form of international co-operation, he said.

The defence's argument amounts to a "provocatively stated proposition" unsupported by facts that does not advance their case one bit, he said.

"That is the sort of technique that is usually found in the tackle box of someone on a fishing expedition," he added.

Frater said the defence alleges that on Nov. 30, 2018, the RCMP hatched a plan to board Meng's plane when it landed and immediately arrest her. He said the defence claims the plan changed during a morning meeting on Dec. 1, when it was decided the border agency would conduct a covert criminal investigation and cover it up.

Although it's true that border officers present at the meeting didn't take notes, RCMP officers did take notes that mentioned the border agency's presence at the table, Frater said.

There is nothing improper and much that is logical about delaying an arrest until a person is admitted into a country, he added. Border officers are required by law to examine a traveller's admissibility and do not have the authority to execute an arrest warrant under the Extradition Act, he said.

The defence has said it was a "foregone conclusion" that Meng would enter Canada to be arrested and, further, the CBSA did not actually finish Meng's admissibility examination. It instead suspended it without a decision, at which point the RCMP executed the warrant.

Meng's lawyers have also questioned why a border officer asked Meng about Huawei's business dealings in Iran. Frater responded that the border agency must ask questions about any alleged criminal behaviour to determine a traveller's admissibility.

Justice Heather Holmes pushed back on this point, questioning what would have happened if Meng had admitted to criminality in the interview with the border officer.

"He would make a decision about admissibility," Frater replied.

Later, Crown lawyer Diba Majzub said even if a traveller is deemed inadmissible, the RCMP can execute an arrest warrant while the person is in detention or after they've been released with conditions pending a hearing.

Frater also said there was nothing inappropriate about the search of Meng's seven bags of luggage, noting travellers are often subjected to this inconvenience at the border.

He said the Crown has already produced more disclosure than is legally required. On Monday, they turned over more documents, including additional notes taken by an RCMP officer several days after he attended the Dec. 1 meeting.

But he said the defence is "fishing" by asking for documents from people tangentially involved in the case, such as individuals copied on an email chain.

"My friends are annoyed because none of this substantiates their theory that this is the meeting where the covert criminal investigation and a coverup were launched."