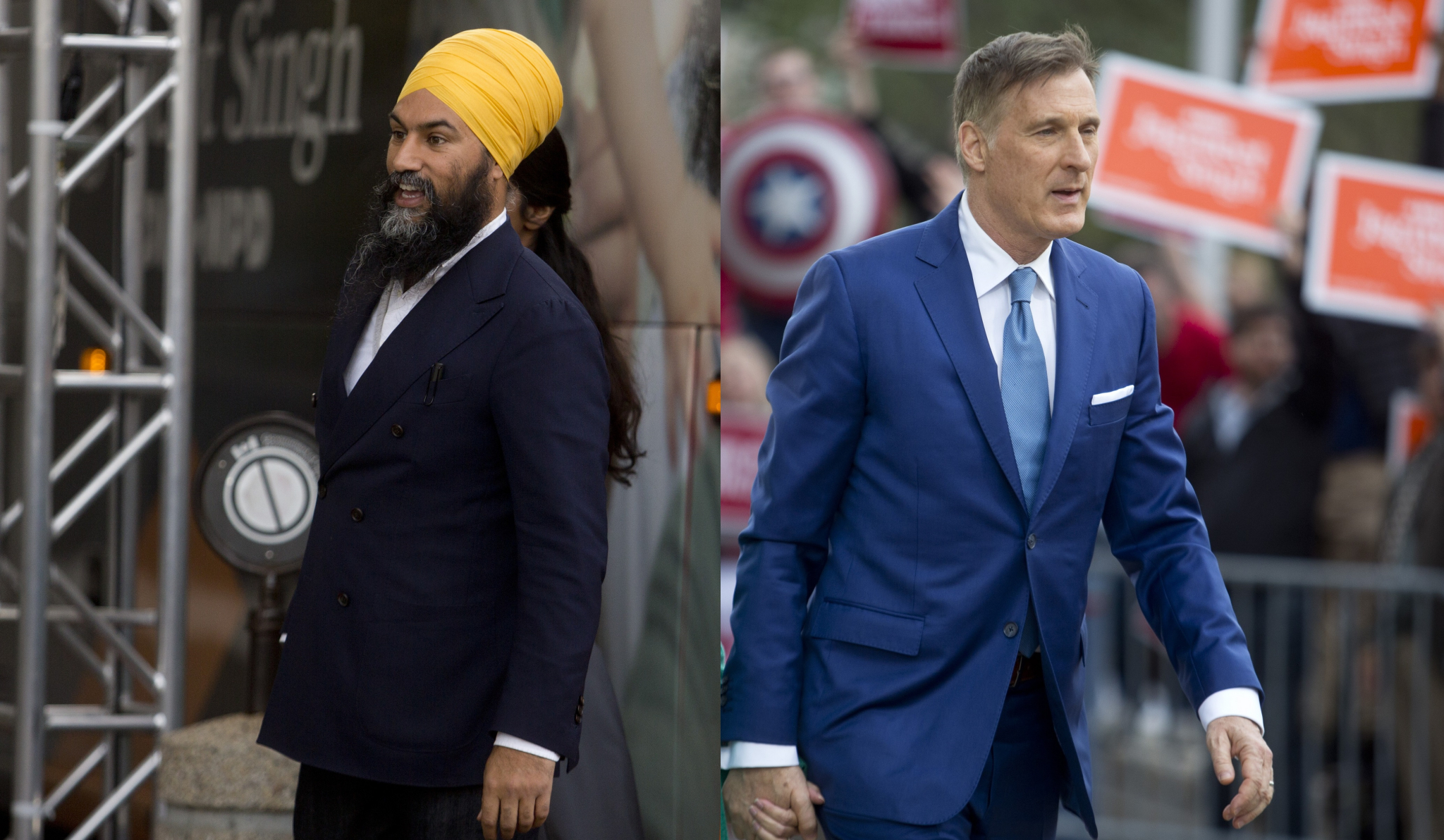 Bernier's year-old People’s Party of Canada stands for "ending official multiculturalism" and slashing the number of immigrants allowed into the country. Its platform also denies the science of climate change. On Monday, Canadians had their first opportunity to watch Bernier debate other federal political leaders.

He wasted little time putting this new exposure to use, tossing out an incendiary anti-Semitic slur in some of his first remarks when he declared that “the other leaders on this stage are globalists” and attacked the United Nations as a “dysfunctional organization.” Discussions about Bernier’s policies ended up dominating the first half of the debate.

Singh, the NDP leader, had already expressed his displeasure at Bernier’s invitation to the debate. Bernier had initially been barred, until the commission in charge of organizing the event changed its mind last month, saying it believed the People’s Party had a "reasonable chance of success in more than one riding" based on recent polling.

On Monday, Bernier called out Singh for his opposition to his presence during a discussion about Bill 21, the Quebec law that bans religious symbolism in the public sector that is before the Quebec Court of Appeal. The law has been attacked as xenophobic and racist.

“You said that you didn’t want me to be here on the stage to have a discussion with you. So, you’re for diversity, but what about diversity of opinion?” he asked Singh. It was a callback; Bernier has said that "more diversity" would "destroy what has made us such a great country.”

“After a couple of minutes of this debate tonight, I think people can clearly see why I didn’t think you deserved a platform,” Singh shot back. “It’s one thing to say you disagree with someone, that’s fine. But when you incite hatred,” he added, “you don’t deserve a platform...your ideas are hurtful to Canada.”

The two-hour debate on Oct. 7, inside the sprawling Canadian Museum of History in Gatineau, Que, saw the six leaders facing off on five critical topics ⁠— “environment and energy,” “Indigenous issues,” “polarization, human rights and immigration,” “leadership, in Canada and on the world stage” and “affordability and economic insecurity" ⁠— overseen by five seasoned moderators.

The People's Party has faced numerous controversies since Bernier, a former Conservative minister, quit his party in disgust in August 2018 to form a new one.

For one, it fired the head of its St. Catharines riding association after he was alleged to have been tied to an American neo-Nazi group. Bernier has said “racists and bigots are not welcome in our party.”

On Monday, Bernier defended his past tweets about immigrants being in “ghettos” and “tribes,” saying “we must have fewer immigrants in this country.” Singh jumped on this defence as inauthentic.

“You could have said, ‘Hey man, I messed up,’” Singh told Bernier. “Because those are pretty horrible tweets.”

Singh wasn’t the only leader attacking Bernier; Scheer said Bernier was making up immigration policy based on likes and retweets “from the darkest part of Twitter.”

Trudeau raised the “fear of the other” that has become “easy currency for politicians...to try and get people to vote against things.” He said Bernier was “playing that role” in his dismissal of the “opportunities around globalization” and how “what it means to be Canadian” is constantly being redefined.

But he also made sure to attack his primary opponent in the polls, Scheer: “Mr. Bernier, your role on stage tonight is to say publicly what Mr. Scheer thinks privately.”

“I’m the only one on this stage that has said ‘Yes, the federal government might intervene” in Bill 21, he added.