This week in climate inaccuracy: practicality vs. ambition at the leaders' debate 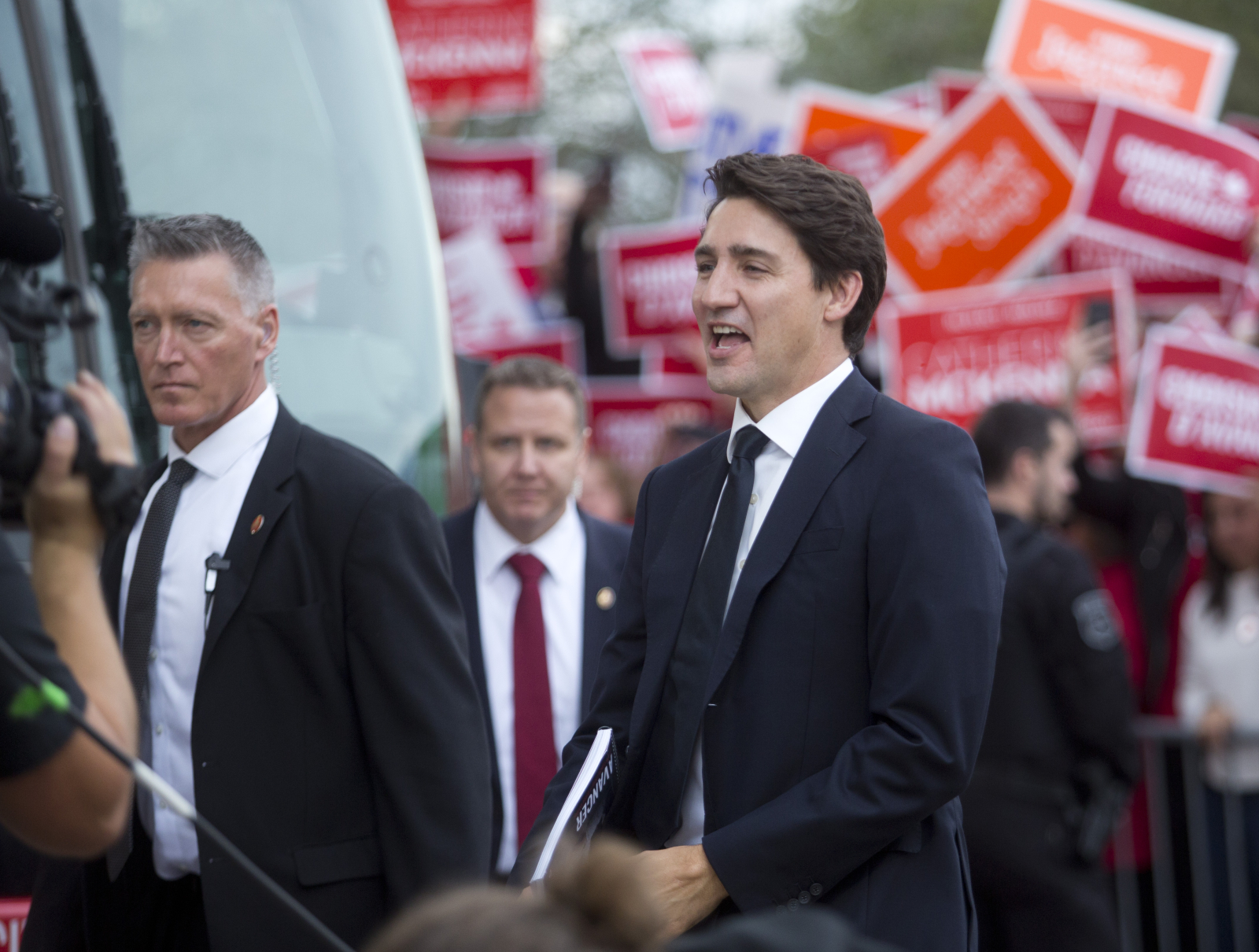 If my purview here extended beyond climate change, I would have no difficulty in determining the greatest inaccuracy in this week’s English-language Leaders’ Debate. It came early, as CTV’s Lisa LaFlamme welcomed viewers. “We all want a meaningful debate tonight,” she said. There was scant evidence of this.

What we got instead was an overcrowded stage, a jumbled format, a cacophony of unintelligible crosstalk, and more of the thoughts of Maxime Bernier than any sane person needs to hear in a lifetime. (Bernier issued the second-least accurate statement of the night, when he described he and his climate change-denying comrades in the People’s Party as “the only real environmentalist party” ⁠— possibly the only line in the debate that can be fact checked in full via emoji. Probably that tears-of-laughter one.)

Notwithstanding the crosstalk, zinger deliveries and talking-point recitations that the debate’s format most rewarded, there was one remarkable thing about the night: For the first time that I can recall, a federal leaders’ debate could be accurately described as being fully saturated in discussion of climate change. By the time the topic shifted formally to “Environment and Energy" an hour and a half in, the conversation, superficial though it was, had already touched on carbon pricing, emissions targets, energy infrastructure, pipelines, and energy efficiency. Whatever else lives on as the legacy of the 2019 election, it’s probably Canada’s first true electoral battle over climate change at the federal level (with honourable mention to Stephane Dion’s much-maligned “Green Shift” of 2008).

So what was the signal amid the noise? Well, unsurprisingly, the opposition leaders on stage all framed their climate plans in contrast to the governing Liberals. Andrew Scheer’s plan is little more than a brochure with photos of him doing outdoorsy things, the Bloc Quebecois plan may as well be a PowerPoint pitch deck produced by Hydro-Quebec, and Maxime Bernier’s plan is the precise policy equivalent of a dimly lit YouTube video.

So let’s focus on the sharper attacks from the Greens and the NDP. Both claimed — credibly — that their climate goals are more ambitious than the Liberals’ plan. Trudeau responded — also credibly — that neither of those plans had the real, enactable policy ballast his did. (My go-to source on the credibility front is the grading work of Andrew Leach and Katharine Hayhoe, who taken together are as close to an unredoubtable non-partisan source as you’ll find on Canadian climate policy in the middle of an election campaign.)

Green leader Elizabeth May’s specific line of argument was the same as it has been all campaign. Trudeau’s targets, she said, were the same as Stephen Harper’s. “Your target is a commitment to failure,” she told the prime minister. “That’s why it’s so doable and achievable.”

An accurate criticism of the Liberal plan? Well, that depends on how you define success or failure. The Liberals have defined success as hitting their Paris target of a 30 percent reduction of emissions below 2005 levels by 2030. Canada’s current emissions trajectory would miss that by 79 megatonnes. But when the Liberals first came to power in 2015, the emissions path was set to miss the target by 300 megatonnes. Trudeau claimed at the debate that his government was three-quarters of the way to the goal, with plans (admittedly still hazy) to close the gap and beyond in the years to come. This is the basis for Trudeau’s repeated claims of an achievable plan.

May’s Greens have pledged to steer Canada’s emissions to 60 percent below 2005 levels by 2030. This — in keeping, May asserted, with the findings of the Intergovernmental Panel on Climate Change — is the Greens’ bar for success.

“A target,” Trudeau retorted on the debate stage, “is not a plan.” And it’s a fair point. An independent analysis of the Green plan by the former head of the parliamentary budget office found that it was not based on “realistic economic and fiscal assumptions,” and in some cases the basic arithmetic in the plan was erroneous.

Fuzzy math is par for the course in an opposition party plan, but the sort of sweeping claims in such plans are worth examining. The Green plan, for example, calls for an immediate moratorium on all new fossil fuel development, followed by a phaseout of oil sands production entirely by 2030 or 2035. The potential job losses from this would be mitigated, according to the plan, by a “just transition” involving retraining and financing for workers switching from oil and gas to the new green economy.

Consider how smoothly a transition of similar magnitude has gone since the cod moratorium 27 years ago in Atlantic Canada. (Is it too harsh to point out how many communities in Atlantic Canada have relied on Fort McMurray for a significant swath of their new employment opportunities?) Now consider the level of anger, pushback and political upheaval created by a $30-a-tonne carbon tax, and multiply it by — allow me a back-of-napkin estimate here — a dozen-fold, as Alberta, Saskatchewan, Newfoundland and northeastern B.C., among others, stare down a top-down shutdown of their bread-and-butter industry.

Do the workers respond to this by filing dutifully through retraining programs in time to become solar-panel electricians and insulation installers and heat-pump technicians ready to retrofit every building in Canada for net-zero emissions, all by 2030? (The British Columbia government, which has been working on a net-zero retrofit plan for several years, promises that all new buildings and renovations will be net zero by 2032.)

Does all that just tidily happen under the Green Plan? Or does the prime minister perhaps have a point when he says a target is not a plan?

Moving on to NDP leader Jagmeet Singh, one of his primary lines of attack against the Liberal plan in the debate (beyond the “you bought a pipeline” zinger, which really should be an audience call-and-response thing at this point) was the claim that it exempts the biggest polluters and continues to subsidize the oil and gas industry. Let’s look at each of these in turn.

First, the federal carbon price doesn’t technically exempt large emitters. What it does is return the majority of the revenue from the carbon tax they pay, similar to the rebate cheques individuals receive. These industrial rebates are for industries where the sudden revenue shock of a carbon tax might push them to relocate in other jurisdictions without a carbon tax instead of paying up. It’s also intended to give a softer landing to operations such as coal-fired power plants which will be shuttered under the national coal phaseout by 2030 in any case. There’s certainly room for criticism of this approach, but it’s not completely accurate to say the plan exempts large emitters. And the NDP plan is silent on how it would deal with the phenomenon of “emissions leakage” I’ve just described.

As for continuing to subsidize the oil and gas sector, the Liberals are guilty as charged — most notably in their purchase of a multi-billion-dollar pipeline project. Oil and gas subsidies are a complex web, though. When Singh mentions billions in subsidies, we imagine Ottawa handing giant novelty cheques to the CEOs of Suncor and Enbridge. In reality, many of the largest line items in the subsidy budget are provincial, not federal — and several of those are targeted fuel tax exemptions. If the NDP is in favour of making fuel for aviation and agriculture in Ontario, for example, much more expensive — together those account for more than half a billion dollars in subsidies — they’ve remained pretty quiet on that as well.

I could go on in this vein — many criticisms were flung at the Liberal plan, there were many deflections, Jagmeet Singh hurled the night’s best climate zinger (“you don’t have to choose between Mr. Delay and Mr. Deny”), and Maxime Bernier was a large emitter all evening. The bottom line, though, is this: the Liberals have a plan, and the prime minister is broadly accurate when he claims the government has “done more in the last four years than any government in the history of Canada.” (Elizabeth May inexplicably claimed Paul Martin had done more, which is by far the rosiest review of Rick Mercer’s “One Tonne Challenge” campaign I’ve ever heard.)

The prime minister defended his plan adequately, and May and Singh did a solid job reminding Canadians they can dream bigger than Trudeau. I’m confident saying a vote for the parties led by any of those three leaders is a vote for stronger climate policy in the next four years. The devil's in the details, of course, but the debate was emphatically not about the details.

The Trudeau Formula should be required campaign-trail reading

It's disappointing to see

It's disappointing to see that Turner's info about the Green plan is out of date. The Parliamentary Budget Office now says (Oct. 3) the Green plan is feasible. (https://ipolitics.ca/2019/10/03/greens-second-costed-budget-gets-a-pass-...)

As well, the Kehoe/Leach analysis is hardly authoritative. It provides about 100 words on each party and ignores key facts. For example, this pair praises the Liberals' carbon tax but they don't acknowledge that 80-90% of industrial emissions are exempt from the tax.

Finally, the perspective taken for this and the Kehoe/Leach analysis is that we have lots of time to address climate change when in fact science is telling us we must bend the emissions curve in the next couple of years if we are to limit disastrous global temperature increases. This would make all of the plans, except perhaps the Green plan, unrealistic and unfeasible, if we are to act effectively on the climate.