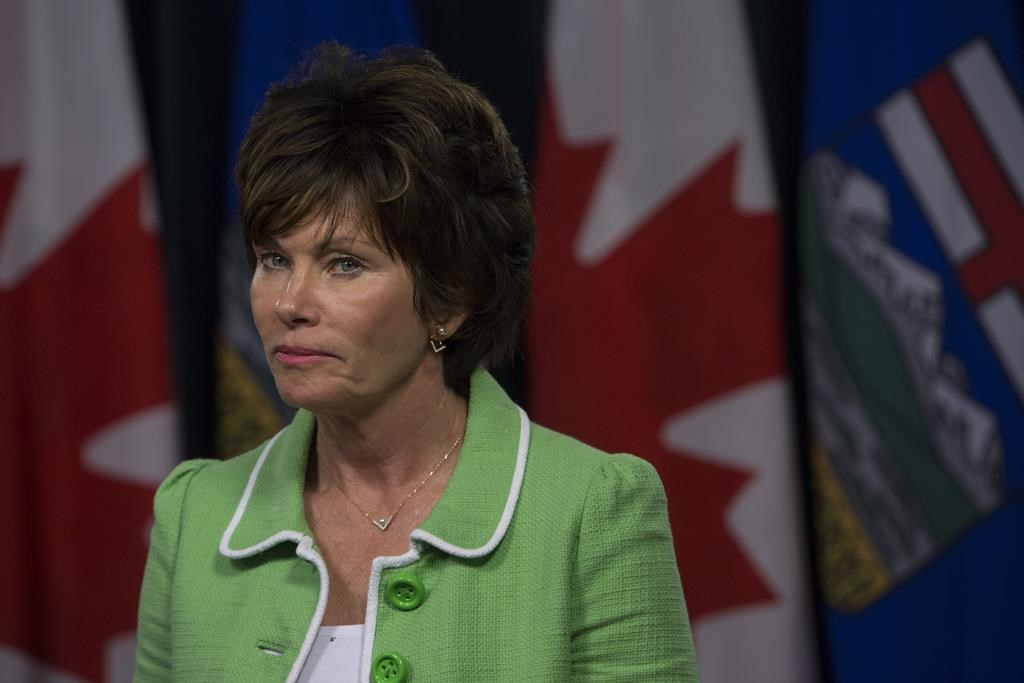 Minister of Energy Sonya Savage listens while Premier Jason Kenney responds to the federal approval of the Trans Mountain Pipeline in Edmonton on Tuesday June 18, 2019. File photo by The Canadian Press/Amber Bracken
Previous story
Next story

Alberta's energy war room is now a legal entity with a new name, a new managing director and a plan to be running by Christmas.

Savage said the centre will focus on improving the reputation of Alberta's oil and gas sector and challenging those it believes are delivering misinformation.

"There will be speaking engagements, anything that you can get that can be utilized to get the story out because over the last decade that story has been framed, and the narrative has been set, by opposition to our oil and gas sector."

The Calgary-based war room will have a budget of $30 million.

She said Olsen, who worked as a senior staffer under former premier Ed Stelmach, will set up the office and hire staff.

Savage, Environment Minister Jason Nixon and Justice Minister Doug Schweitzer are the board of directors.

There will be three departments: a research group, a data analysis wing and a rapid response team to challenge misinformation in real time while promoting information about Alberta's oil and gas sector.

She said it will be called the Canadian Energy Centre instead of the Alberta Energy Centre because it will have to take the message to investors and other decision makers around the world.

"And we also know that when the energy sector prospers, the entire country prospers. So it is more than just an Alberta issue. It's a Canadian issue."

The centre is part of what Premier Jason Kenney has termed a "fight-back" strategy against those he says are unfairly denigrating the industry and contributing to the landlocking of Alberta's non-renewable resources.

The province has also launched a $2.5-million public inquiry into foreign funding of anti-oil advocacy groups.

NDP critic Irfan Sabir said the former NDP government worked with stakeholders and other levels of government to promote Alberta's oil and gas sector and its commitment to environmental sustainability.

Sabir said the war room is a waste of money.

"This government is spending $30 million for a soft landing of one of their failed candidates," he said.

In the April election, Olsen lost to NDP member Joe Ceci in the Calgary Buffalo constituency.

Sabir said the money is particularly critical given Kenney's government is signalling there will be cuts in the Oct. 24 budget.

"I didn't hear anything (about) how this Twitter machine will help us get our product to market," he said.

They should call it the

They should call it the Alberta Climate Crisis Denial and Tar Sands Boosting Blame Environmentalists Without Evidence Centre.

From Subject Received Size Categories
Carl Shalansky FW: We all can do more ! 11:34 AM 36 KB