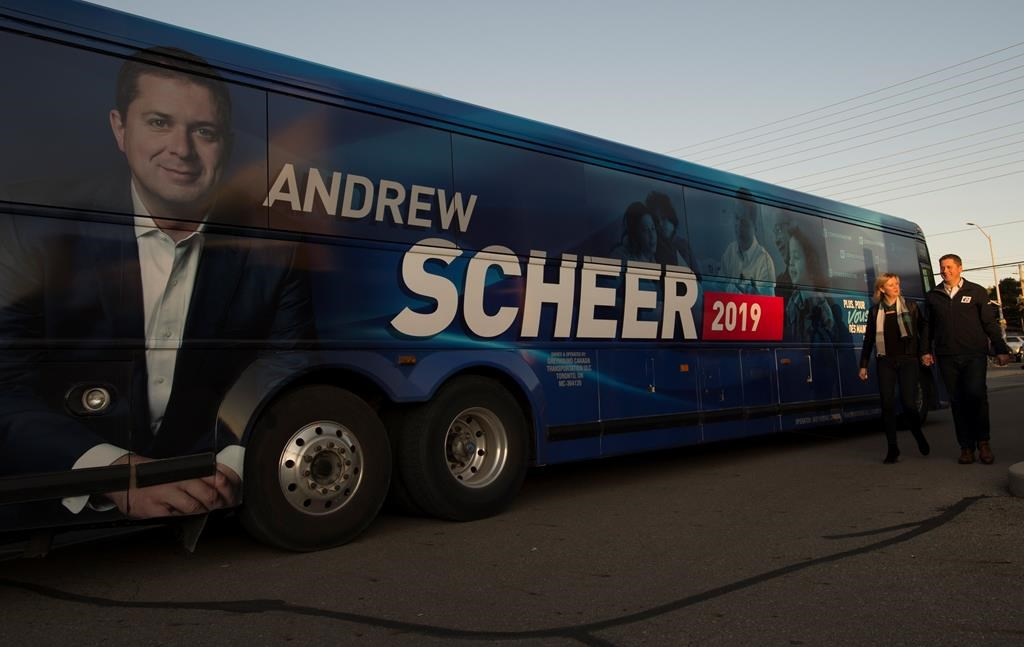 Conservative leader Andrew Scheer and his wife Jill arrive for a campaign stop in Mississauga, Ont. on Tuesday, October 8, 2019. File photo by The Canadian Press/Jonathan Hayward
Previous story
Next story

Liberal Leader Justin Trudeau dismissed any notion that national unity is under threat Wednesday as he and other national leaders made efforts to beat back growing support for the Bloc Quebecois.

The Bloc was almost defunct 18 months ago, but under the leadership of former Quebec provincial politician Yves-Francois Blanchet, the party is making a significant comeback. Polls and seat projections suggest it might win 20 seats or more in Quebec, up from 10 in 2015 and just four in 2011.

Its resurgence is strong enough, and the expectation of a minority government emerging from the Oct. 21 federal election high enough, that Trudeau, Conservative Leader Andrew Scheer, and NDP Leader Jagmeet Singh are facing questions about whether they could work with the party that was formed to help create the conditions for Quebec to separate.

Dreams of outright separation, however, are faint. Blanchet and Quebec Premier Francois Legault, a former Parti Quebecois minister who now leads the less fervent Coalition Avenir Quebec, are more interested in promoting Quebec nationalism — letting Quebec chart its own course even in some areas of federal jurisdiction like immigration.

Trudeau didn't answer Wednesday when he was asked whether he could work with the Bloc, responding instead that Quebec cares about the environment and the Liberals are the only party that can ensure a realistic national climate-change action plan continues to move forward against the objections of conservative premiers such as Ontario's Doug Ford and Alberta's Jason Kenney.

Scheer said Blanchet's priority is sovereignty, although Blanchet speaks of being the party to stand up for Quebec's interests in Ottawa, not separating. Scheer's hope to rebuild his party's numbers in Quebec is being lost to the rising Bloc and he is trying to reach out to Bloc voters again.

He said this week he respects Legault's request to have some control over immigration to Quebec and has previously said he'd let the provincial government oversee the collection of federal taxes in Quebec.

On Wednesday, Scheer was in Quebec at the Roxham Road border line between Canada and the United States, where a majority of irregular asylum seekers are crossing into Canada. He is promising to stop them — though how he would do that is not obvious and he refused to say.

Singh didn't even call the Bloc Quebecois by name during a stop in Montreal Wednesday morning, even though the Bloc is threatening to wipe the NDP right off the map in Quebec. He said only that the NDP is the party that can work with progressives across Canada on issues like the environment.

But on national unity, Alberta political scientist Duane Bratt said, it's not Quebec that's at stake — it's Alberta.

"You have not an insignificant minority of people who say if Trudeau wins, we're separating," said Bratt, a professor at Mount Royal University in Calgary. "I don't think that's very serious. I think there are all sorts of ramifications and difficulties. But there are a lot of people making those noises. And some influential people."

That includes Kenney, who has continually told Trudeau and some premiers that they are risking national unity if Alberta can't build more pipelines to move more oil. Not that Alberta, with no coast of its own, would have an easier time getting oil to customers other than the United States if it were independent, but the anger underlying the idea is real all the same.

Bratt said separation as an idea is percolating in Alberta and Saskatchewan, but fear of separation exists all over. When Scheer was campaigning in Nova Scotia in late September, one man at a rally in Annapolis Royal told Conservative handlers that Scheer had to win because "we won't have a country left" if he doesn't.

Bratt said for the federal leaders, including Scheer, national unity may not be on their minds now but "it will be a governance issue the day after the election."

That is true no matter who wins, he added.

The Trudeau Liberals won four seats in Alberta in 2015, including two in Calgary, the first Liberal wins in that city since the 1960s. Anti-Trudeau sentiment is so intense in Alberta all four of those seats are at risk, and the Liberals could be shut out of Alberta entirely. Longtime Liberal Ralph Goodale's seat in Saskatchewan, which he's held through thick and thin for the Liberals since 1993, could swing blue if the Tory tide rises high enough.

Bratt said if there is a Liberal government with no seats in Alberta or Saskatchewan, it's going to be a problem because Alberta won't even have a seat at the cabinet table.

If Scheer wins the most seats and seeks to form a government, all of his potential partners have said they couldn't abide Conservative promises to kill the carbon tax and reverse changes to federal environmental-assessment legislation governing major projects.

"He won't be able to make any of those changes," Bratt said. For many voters in the West, "you either have a Liberal government you actively opposed or a Conservative government you strongly supported but is unable to deliver anything you want. What does that look like for governance? I don't have any answers but it's something that's been bothering me."

Singh's stance on Bill 21 called out by anti-hate group

In the words of our lawn sign, "Talk to me about your climate plan". I'm an Albertan who believes climate crisis is the most pressing issue facing the world. Building or expanding pipelines would increase the threat to the survival of our species. How could we vote for the Liberals or for the Cons? Let us not forget that the Cons are but the latest incarnation of the corporatist harperites who dragged their feet when it came to climate policy and attacked environmentalists. Oh, wait, Jason Kenney was one of them!